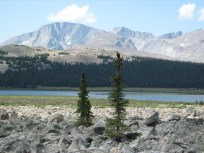 The 2016 Republican National Convention was a complete disaster.

Let’s start with the obvious– the potential republican first lady plagiarized Michelle Obama’s convention speech from 2008, the runner-up candidate refused to endorse the republican nominee for president, and a group of Colorado delegates walked out in protest on the first day. And with all those missteps, one huge issue got swept under the rug. Republicans just included the sale of our public lands as part of the party’s formal platform. Lead by chairman and Wyoming Senator John Barrasso, GOP officials made their intentions completely clear in their proposed platform, which includes the transfer of federal lands into state control.

And while the language says that the transfer will be a victory for state’s rights advocates, most states actually lack the financial capability to support such large amounts of land. Ultimately, most of that land would have to be sold or leased to private companies and other institutions in order to cover the costs associated with state ownership.

Bottomline, properties operating under federal institutions such as the United States Forest Service and Bureau of Land Management could all come up for grabs if the platform gets its way.

And while republicans continue to promise a return to what they refer to as “Reagan-era republican politics,” the new platform is in complete opposition to what Ronald Reagan saw as one of the most important aspects of American culture. During his 8-year administration, Reagan actually added 18 federally protected units including the Gauley River National Recreation Area, Natchez Trace National Scenic Trail, and City of Rocks National Reserve. Outside Magazine was happy to point out one Reagan quote which reads as follows:

“The preservation of parks, wilderness, and wildlife has also aided liberty by keeping alive the 19th century sense of adventure and awe with which our forefathers greeted the American West. Many laws protecting environmental quality have promoted liberty by securing property against the destructive trespass of pollution. In our own time, the nearly universal appreciation of these preserved landscapes, restored waters, and cleaner air through outdoor recreation is a modern expression of our freedom and leisure to enjoy the wonderful life that generations past have built for us.” – Ronald Reagan

Unfortunately, it doesn’t stop at public land. The entire environment is up for grabs as well with language in the platform denying any causality between growing carbon dioxide emissions and the onset of changing climate. In the same section, ironically titled “Environmental Progress,” the platform intends to “forbid the EPA to regulate carbon dioxide, something never envisioned when Congress passed the Clean Air Act.”

Find the entire Outside article here: Fact-Checking the GOP’s Plan to Steal Your Public Land