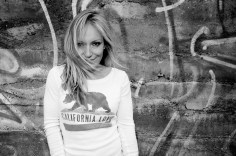 Jamie Anderson had one hell of year in snowboarding.

Anderson won the Burton US Open, Winter X-Games in Aspen, X Games Norway, as well as the US Snowboard Championships in Yabuli, China. Yet after all those awards, perhaps nothing matched her the star-time moment when she received the ESPY for Best Female Action-Sports Athlete at Microsoft Theatre in Los Angeles on Wednesday.

So thankful on so many levels! ✨✨✨ I wouldn't be where I am today without the love, support & encouragement of my family, friends & of course my sponsors! Thanks for making my Dreams a reality! Unbelievably grateful. #espys #4thespy @jovanifashions (dress) @jovani_la @csarite (jewelry) @greymerofficial (shoes) Hair & makeup @tanikaisgangsta

Accompanied by her boyfriend and fellow pro snowboarder Tyler Nicholson, Anderson raised the ESPY and thanked her friends, family, and fans for the award. The snowboarder from Lake Tahoe beat out Chloe Kim, Keala Kennelly, and Carissa Moore.