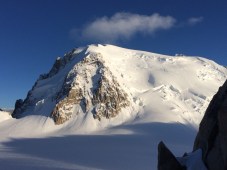 An avalanche that claimed the life of a New Zealand ski mountaineer may have been caused by French police reports The Local.

The avalanche, which occurred at roughly 11:30am on Monday Morning just below the summit of Mont Blanc du Tacul, ran approximately 600 meters and buried the New Zealand ski mountaineer deep in the snow. The two gendarme in question were also caught by the avalanche but were able to walk away from the incident. The Kiwi skier was not so lucky. According to various reports, the two gendarme may have provoked the slide while training atop the peak.

Reports from The Local indicated the two men were “shocked and shaken” since the incident. Authorities plan on questioning the two men once they are sufficiently recovered.