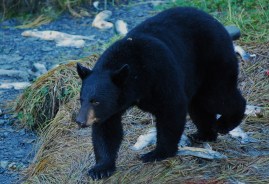 While dropping out of a marathon is never a good feeling, one runner is simply happy to be alive after surviving a terrifying encounter with a black bear just miles short of the finish line.

Karen Williams was running in the Valles Caldera National Preserve, when she came upon three black bear cubs and a protective mamma bear. In what appears to be an act of defense, the mother bear clawed, bit, and threw Williams to the ground, leaving her bloodied and beaten. Ultimately, she successfully played dead before another runner discovered her nearly 30 minutes later. She was later airlifted to a nearby hospital, where she is expected to make a full recovery.

In an interview with ABC, Williams told one reporter, “I have a nice chunk out of my eyebrow that I will probably have to get a bit of plastic surgery on.”

JEMEZ SPRINGS, NM: A participant in a permitted running event at Valles Caldera National Preserve in New Mexico was attacked by a female American black bear on Saturday when the individual came upon the bear’s cubs along a backcountry road being used as the event route.

The incident occurred in the southwest corner of the preserve, known as Banco Bonito, approximately seven miles away from the Valle Grande. The runner was part of a marathon event being conducted on the preserve under a special use permit. The individual was found by another runner, and aid was dispatched to their location. The injured runner was evacuated by medical helicopter and taken to the University of New Mexico Hospital in Albuquerque for treatment, and is expected to recover from the injuries.

“Our deepest thoughts and sympathies are with the individual during their recovery from the injuries,” Superintendent Jorge Silva-Bañuelos said in a release.

Pursuant to New Mexico State law, the New Mexico Department of Game and Fish dispatched officers to the area to conduct an investigation and attempt to locate the bear and euthanize it in order to test for rabies.