Over Half Of The Water In The Colorado River Basin Comes From...

Over Half Of The Water In The Colorado River Basin Comes From...

In many ways the story of water in Colorado is a tale of two springs. Spring thaw in the mountains and sub-surface springs (groundwater) combine each year to fill Colorado’s rivers to the brim and on bad years– keep the rivers from drying up completely.

Related: 10 Mind-Blowing Facts About Rivers In The USA

And while the connection between snow melting and high river levels isn’t rocket science, most people would be surprised to find out that over half of the water in the Colorado River Basin comes from groundwater, i.e. sub-surface springs.

According to a new study from the United States Geological Survey, 56% of the water in Colorado’s vast river systems comes from groundwater aka “baseflow.”

Using 146 data collection sites in Colorado, New Mexico, Wyoming, Arizona, and Utah, the study employed electrical conductivity in the water as the key variable. Containing a higher amount of ions, groundwater picks up its conductive elements while traveling through rocks and soil. On the other hand, rainfall runoff and snow melt sports lower ion counts since they typically spend less time interacting with metals in the soil. Ultimately, scientists from the USGS discovered that 56% of the water in the Colorado River Basin has groundwater origins! 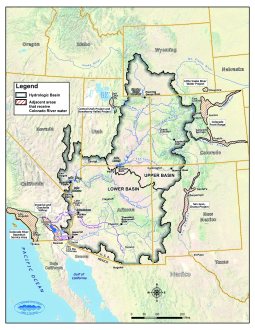 That’s not to say snowfall and rainfall are not playing a crucial role in groundwater reservoirs. Actually, it’s quite the opposite. As the snow melts and rain falls from the sky, the moisture which doesn’t run off or evaporate eventually ends up as groundwater. That contribution, especially in a gradually melting snowpack that is less likely to evaporate than rain, plays a pivotal position in recharging groundwater reservoirs.

However, as snowpacks decline year by year, recharging events will likely become more and more difficult to predict. That means, states, counties, and other municipalities must protect and carefully plan how they use their groundwater resources moving forward.

Find the entire study here: The importance of base flow in sustaining surface water flow in the Upper Colorado River Basin