10 Mind-Blowing Facts About Rivers In The USA

10 Mind-Blowing Facts About Rivers In The USA

The United States is home to some of the most beautiful rivers in the world. So in honor of the great rivers that flow across this great country, here are a few things you likely don’t know about our rivers.

10 Facts You Don’t Know About Rivers In The USA

The Snake flowing underneath the Tetons | Photo Credit: NPS

7) The Mississippi is the deepest and most voluminous river

The Mississippi flowing through the Twin Cities | Photo Credit: Moncrief

6) In 2009, an US Airways pilot successfully landed a passenger plane on the Hudson River after birds flew into the engine. No lives were lost.

5) There are approximately 8,100 dams in the United States 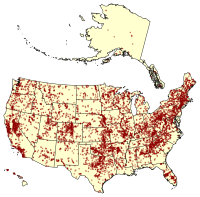 Dams in the United States

4) The New Madrid Earthquakes (1811-1812) temporarily reversed the flow of the Mississippi River.

3) In the early 1900’s, engineers reversed the flow of the Chicago river. It still flows backwards to this day.

1) The New River in West Virginia is the oldest river in the United States. The only river that is older in the world is the Nile.