This GIF shows the Sentinel Landslide and its subsequent effect on the valley | Photo Credit: Jeff Moore/University of Utah | Cover Photo: John Fowler

A University of Utah study has revealed exactly how an epic landslide created Zion National Park signature and picturesque valley. And according to the study the landslide happened in the past 5,000 years!

Although that might seem like a long time ago on the human timeline, it’s less than a second on earth’s geological clock. The study in question indicates the landslide happened in less than a minute and included a large section of rock falling into the valley. That mass of earth ultimately blocked the Virgin River.

Consequently, a lake was formed, which created the flat valley of Zion Canyon. 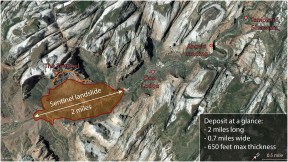 In a statement released on the University’s website, senior author Jeff Moore commented on the two subsequent effects of the landslide saying, “One was constructive, creating paradise through cataclysm. More than 3.6 million people last year enjoyed the flat and tranquil valley floor of Zion Canyon, which owes its existence to this landslide. The other aspect is the extreme hazard that a similar event would pose if it happened today.”