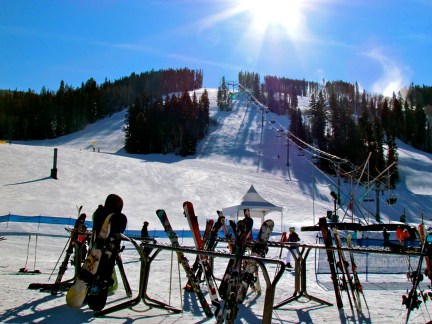 Don’t leave your skis on the rack when the Beaver Creek Bandit is in town… | Photo Credit: Jeff Gunn | Cover Photo: Eagle County

While ski theft is usually a rare occurrence in most mountain towns, there may not be a more prevalent spot for ski thieves than along the I-70 Corridor in Colorado.

Nicholas Broviak, who we’re calling “The Beaver Creek Bandit,” was arrested Tuesday after Colorado State Troopers discovered a ridiculous amount of ski and snowboard equipment in the bed of his Dodge Ram truck reports CBS Denver. He was initially pulled over for failing to signal.

Upon pulling the man over, authorities proceeded to search his truck, where they found over 100 pieces of ski related equipment. After realizing that no one person needs 12 pairs of skis and 14 snowboards, the troopers matched the pieces of gear to theft reports from various hotels and rental shops across Eagle County. One of the priciest items included a custom-made fur coat, which the suspect allegedly yanked from a Vail residence back on May 3rd.