Happy Thanksgiving, friends! I hope you’re spending time with family and maybe even getting out for some early season turns.

Our friends at Powderchasers are forecasting an pretty solid storm cycle to sweep across the American west over the next 4-7 days. What better way to celebrate Thanksgiving than making soft, powdery turns on snow?!

Take a look at the full forecast from Powderchasers below, and I hope you have a wonderful holiday. 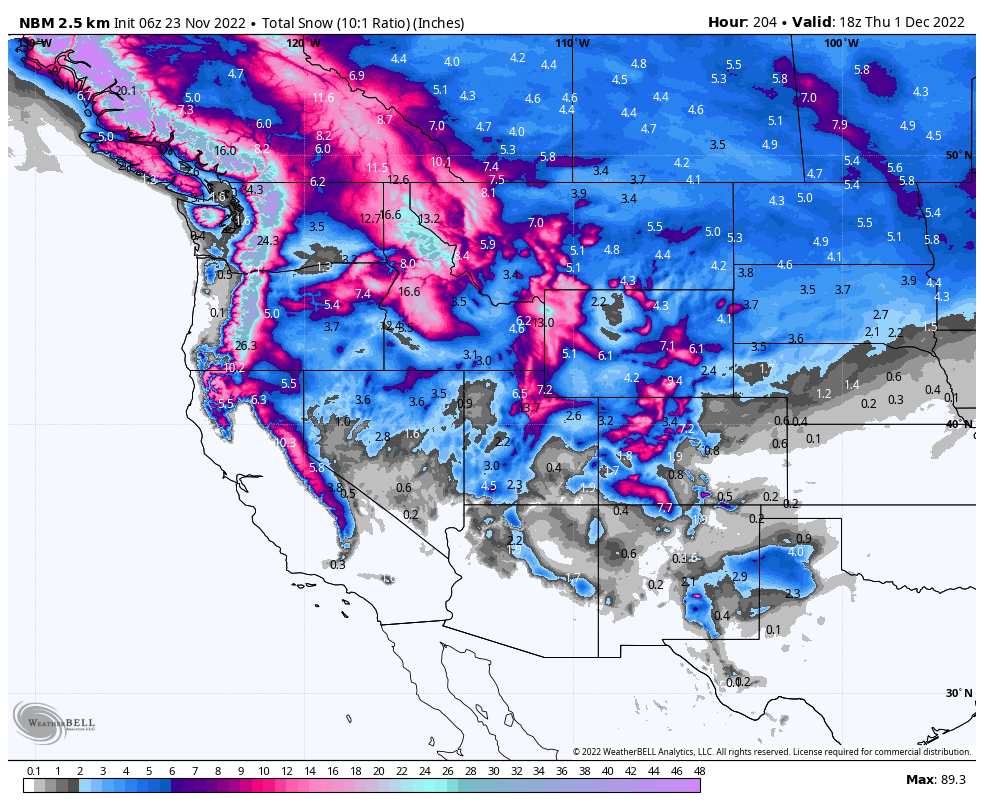 POWDER ALERT! 1-2 FEET-ENJOY YOUR TURKEY NOW AND RIDE POWDER IN THE 4-7 DAY FORECAST.

Weak systems will graze the Rockies for Turkey week while a stronger system moves into the PNW and Canada for the weekend. This will likely bring some significant snow to the Cascades, BC, and eventually areas of the Northern and central Rockies. The Sierra is a wildcard with the models downtrending.

Announcement: Please donate here or support PC by joining the Powder Concierge (Custom forecasting for your deepest chases of the season). This supports your frequent pow casts and keeps the buzz flying for the white room. We are also funding a new roll out of shirts and stickers so send us an email if you are interested.

The departing storm over the Pacific Northwest brought up to 9 inches at Stevens Pass (The last forecast was for 4-8). No measurable snow fell at the lower elevations of Mt Baker (Warmer than expected) with mainly rain/snow mix. It’s possible that the upper aspects of Baker scored deep wet snow (We shall see). Less snow fell further south. Stevens benefited from SE winds and colder inland air pushing up against the mountain ranges keeping temps in the mid-20s. Further north temps were in the low to mid-30s towards Mt Baker.

The next 7 days bring chaseable snow to the Cascades, Canada (Whistler is opening), and some areas of the Rockies. Bases are still low in the Washington Cascades with higher amounts in Oregon. Make your decisions on these factors since it might be worth waiting out for additional storms next week as the base depths increase. You might get lucky with this pattern in the PNW and catch openings as the snow continues to build this weekend and again mid to late next week which is a high-confidence bet with cold temps. Both WA and Oregon should benefit from these upcoming storms. BC will also do very well this weekend and next week (Western areas will be deeper but inland areas will still see double digits). There are multiple waves of energy all starting this weekend (2-3 systems to watch).

The pattern picks up over the PNW and Canada this weekend with colder temps and eventually moves SE over the Rockies and perhaps the Sierra early to mid next week. The models were showing significant snow for the Sierra just yesterday (Tuesday) and suddenly shifted the action further north. We need more model data as we get closer. The confidence is a bit less for a deep storm in California. There is little consensus on who grabs the deepest snow outside the PNW and BC (High confidence). Currently, in looking at multiple model runs and ensembles there is decent confidence for a decent double-digit dump for most of the northern Rockies with Utah on the cusp. (12-15 or 6-9 depending on the model run). I have higher confidence in the Teton ranges and areas north into Montana and Idaho. Most of this pow in the Rockies will fall in the Tuesday to Thursday timeframe with a slow-moving front. Colorado will do best Wednesday or Thursday with the northern areas favored. Chases will focus on snow piling up in the PNW (Especially by midweek) and watching the northern Rockies carefully for last-minute moves. Much will depend on current base depths and open terrain. Don’t jump too early, especially in the PNW where base depths are still low.

Below: The European Model shows the low digging further south than the American GFS, hence bringing some snow back to the Sierra. The GFS has much lower amounts. Bottom Line: Currently this storm looks to favor the mountain ranges north of the Sierra but it’s too early to forecast as the models flip flop. 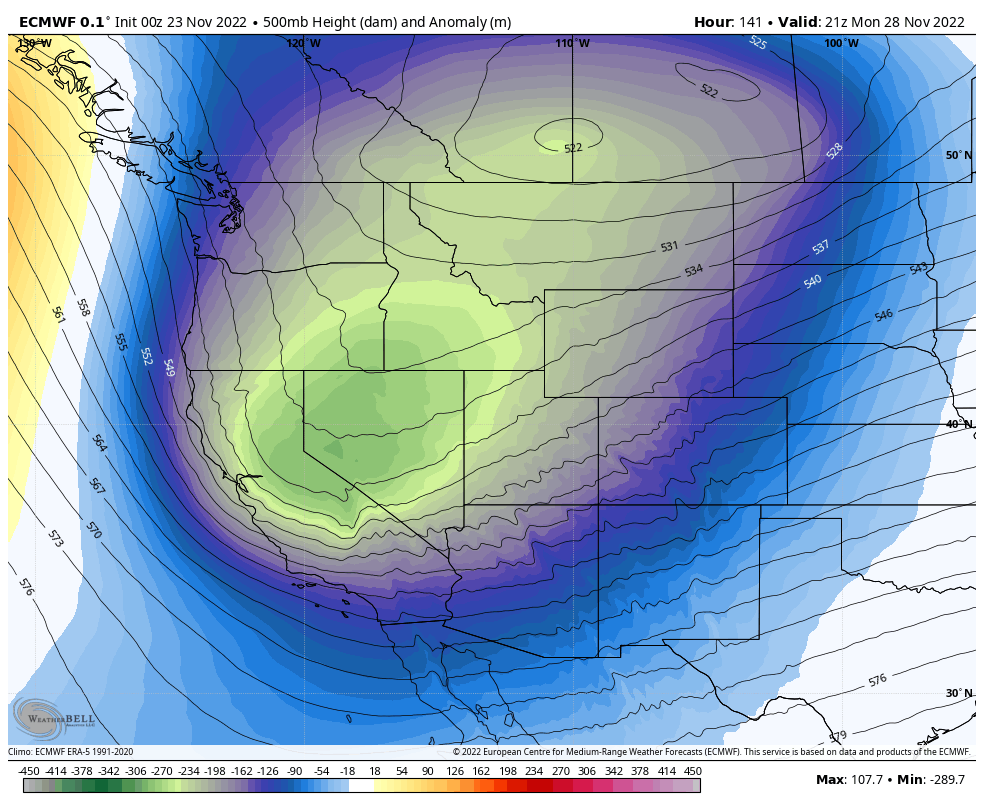 Below: The American GFS shows the low setting up further north and resulting in less snow for the Sierra. 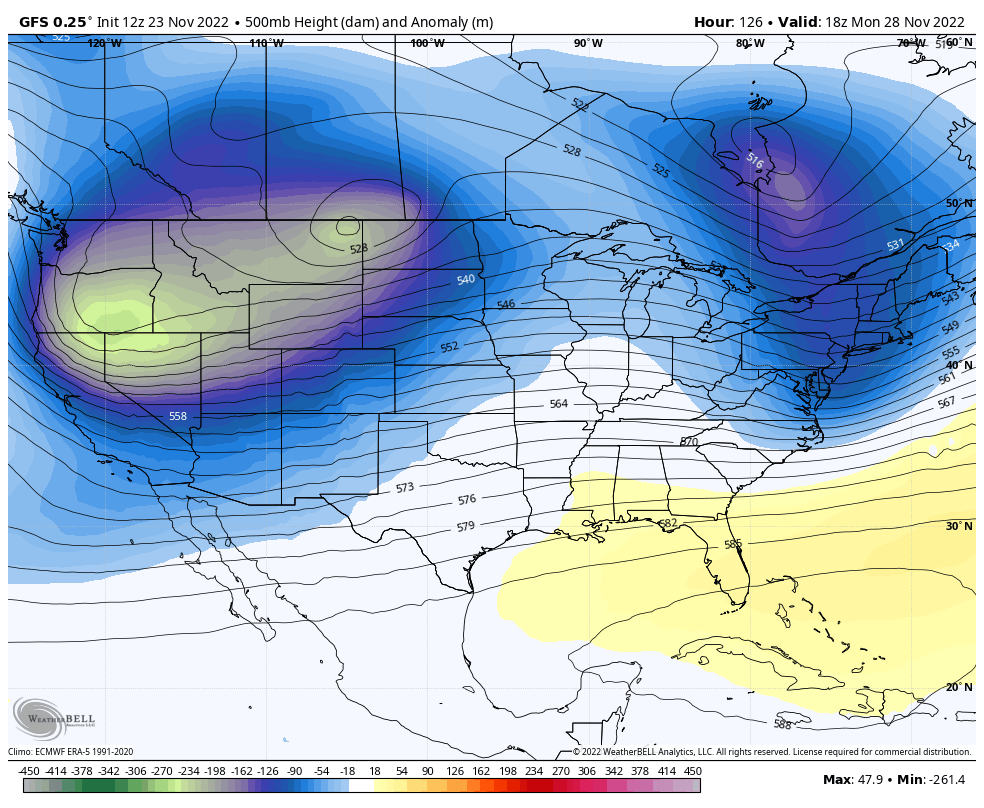 Below: Total snowfall through next Thursday, December 1st is abundant favoring BC, PNW, North/Central Idaho, Montana, Tetons, Wasatch (Wildcard), and most of Colorado (Wildcard further south). Most of this snow will fall this weekend and mid to late next week for the PNW, and midweek for the Rockies. The Sierra is a wildcard with the models flip-flopping but downtrending. Models this far out will change! The Rockies grab a bit more snow late next week as well.

Below: U of Utah ensembles showing low consensus on snow totals for Kirkwood with a median range in the light or moderate range. The European ensemble (Not shown) has higher amounts edging the low further south toward the Sierra. Our confidence in a deep dump in the Sierra is lowering somewhat but keep your fingers crossed. 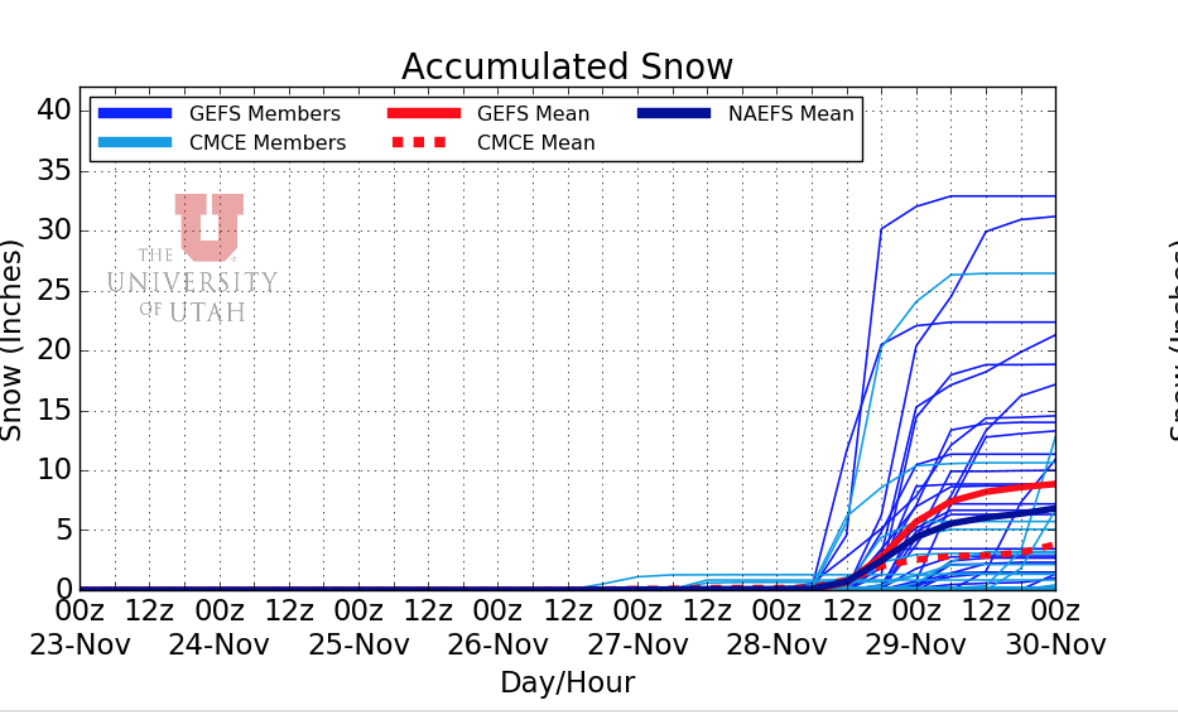 Below: Park City ensembles are pretty healthy next week peaking Tuesday or Wednesday. It’s likely a foot or more fall in the Wasatch Range.  These tend to be overdone this far out in the forecast range and will narrow in totals in a future post. 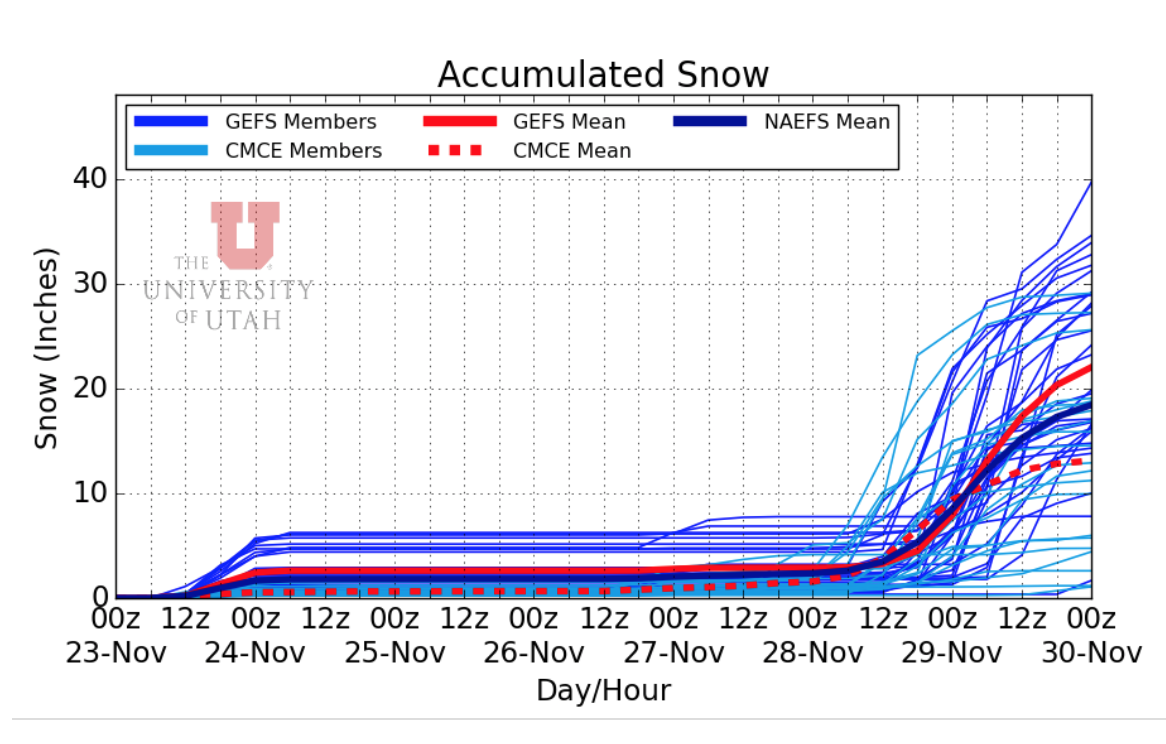 Below: The Teton Range has a decent consensus for a deep storm in the Tuesday to Wednesday period. This storm is still almost a week away so confidence is less until we get closer. These runs can be overdone this far out with the GFS overly confident (Range is in the double digits). With possible downtrending, I would expect 10-15 inches or more for the Tetons for JHMR and Targhee. Further north into Montana may also benefit. Our friends at Selkirk Powder below may also be doing well next week! 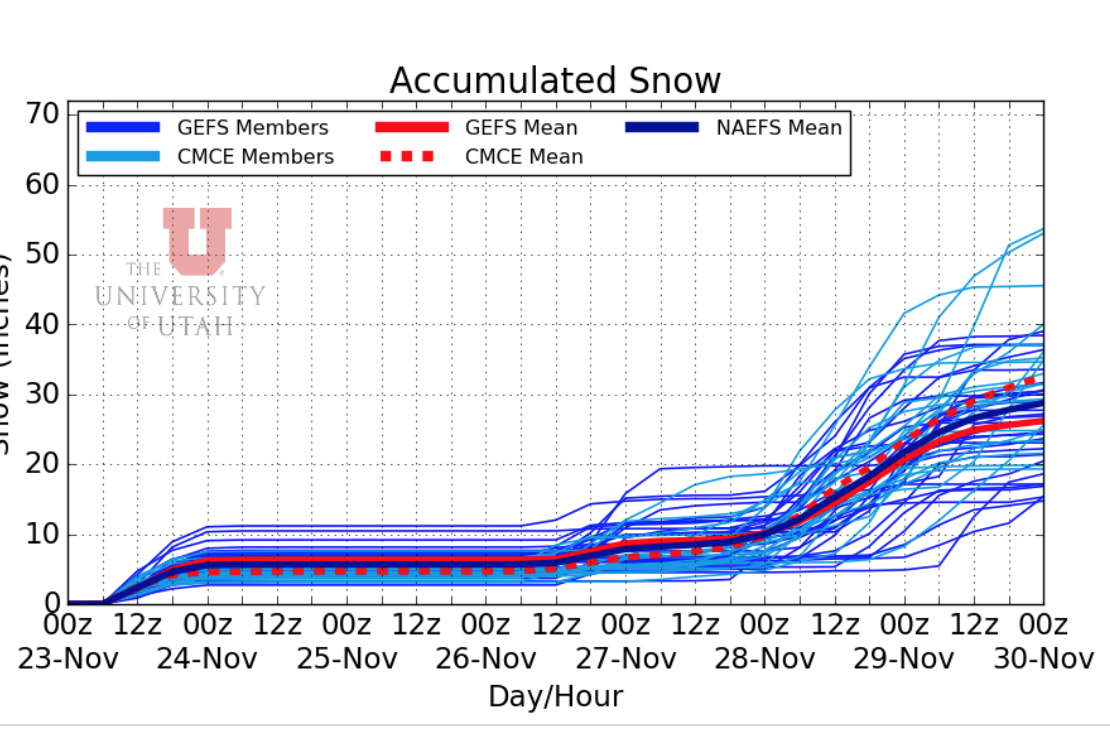 Bottom Line Powder: Cold and stormy period for the west. High confidence for the PNW and Canada, Moderate confidence for double digits in the Rockies favoring northern and central regions. Lower confidence on the Sierra but it could still happen!

This will be addressed in the next forecast and technically the data above is in the longer-term period. We might stay active towards the end of next week and into the early days of December.

Below Low pressure noted may bring a return of snow late next weekend into the December 4-5 timeframe. Low confidence this far out. 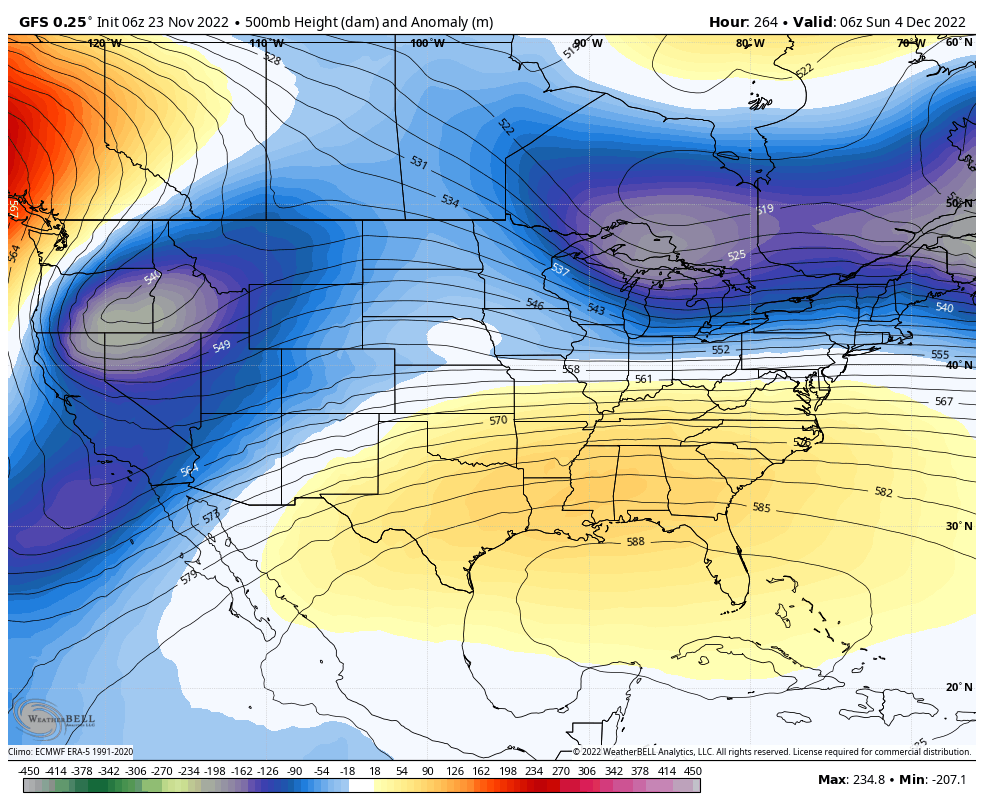 Below: December 6th shows a ridge over the PNW and Rockies with a storm possible for the Sierra (Anything can happen). 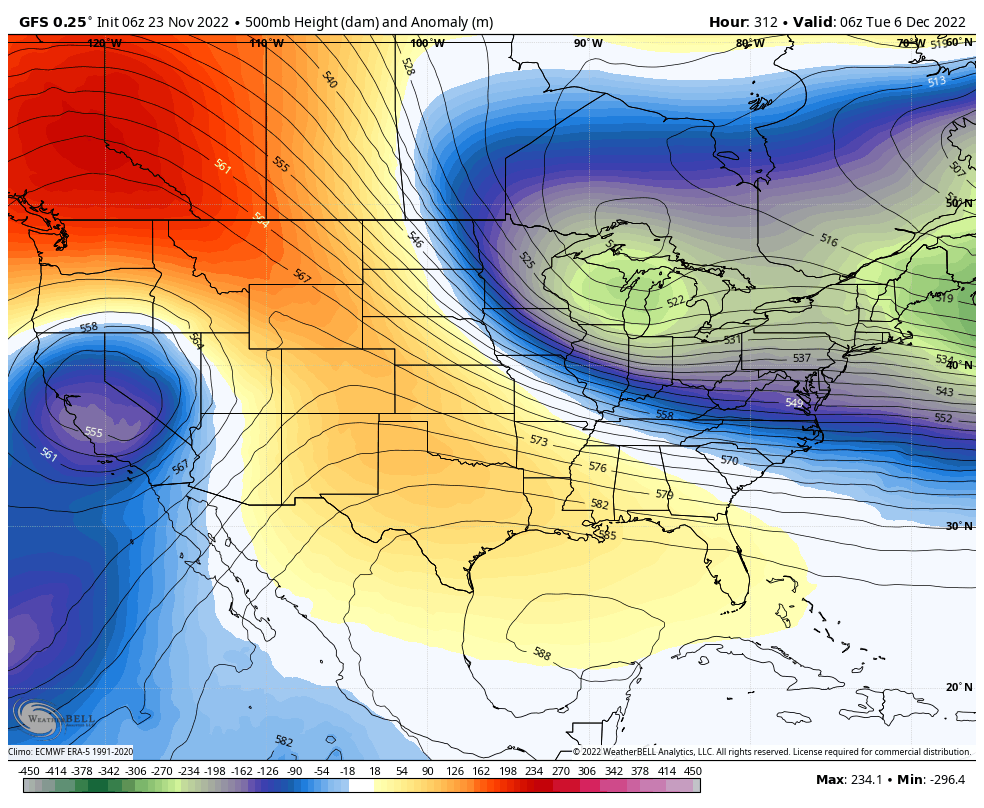 Happy Turkey Day!  Some white turkeys will be out there especially by the weekend and next week. Don’t forget to donate to PC to keep our forecasts coming.