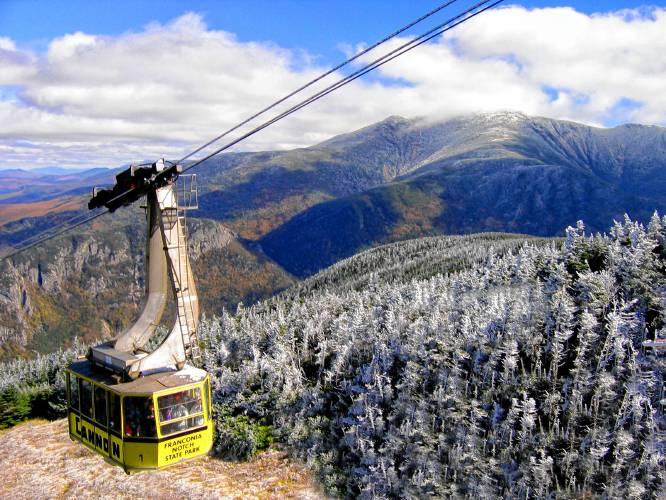 Cannon Mountains tram is about to get a makeover. The Storm Skiing Journal & Podcast reports that Cannon Mountain is indeed looking to update its tram. The mountain is currently looking to secure the funds via the American Rescue Plan, with the replacement likely costing between $24-$32 million due to potential supply chain issues.

The lift itself won’t change much, as the base and summit buildings will not be altered. This means the trams themselves, along with lift infrastructure will either undergo a “major overhaul or replacement,” so it won’t become a gondola or chairlift setup. The lift will likely be produced by Doppelmayr, and the replacement will bring $1 million dollars a year more than its predecessor. The lift can hold seventy people on it, but the base and summit terminals can hold trams with one hundred people on them. This means the tram cars will likely be expanded to fit this mark.

Best-case scenario for @cannonmountain tram upgrade would be 23/24 season, DeVivo said. Doppelmayr would likely be the manufacturer for an overhaul; would bid out for a total rebuild. DeVivo estimates tram would bring in $3M/year, $1M more than current tram.

According to the Concord Monitor, there are a few issues with the current aerial tram. The first issue is the lift has now surpassed forty years old, as it opened during the 1979-80 season(the original tram opened back in 1938, so the timeline of the replacement adds up). The lift was manufactured by Italian company Nuova Aguidio, who wrote out all of the instructions and other important info about the lift in Italian. While I imagine it’s gotten easier over recent years because of the innovations of Google Translate and other language apps, I can’t imagine how difficult it was to manage this relationship in the 80s, 90s, and early 2000s. It’s a bummer they’re replacing this classic, but at least another aerial tram will be going in its place.

Another scoop from the media event revolves around Cranmore’s Skimobile Express, a high-speed quad that has operated since 1995.  The lift overhaul will follow what took place at partner mountain Bromley over the summer. The reinvigorated lift will feature replaced parts/controls at the top and bottom terminals, advanced safety features to protect against wind holds, and increasing capacity by 20%.