Summary: In the short term significant rain/snow will impact Canada. Early next week cooler air filters into the Rockies kicking off some moderate snow favoring northern areas. The long term outlook shows a deep and cold trough digging over much of the west including moisture starved CA and the 4 corners. There are 2 storms to watch!

Short Term Forecast: Warm and dry weather is continuing over much of the Rockies today with Denver reaching the lower 70’s on Monday.  Denver has only seen a meager 2 inches of moisture since June 1st, and is setting all time records for no snowfall this late in the Fall. Warm temps will continue for the next week with some cooler air in sight for the Rockies beginning December 6th (Coolest air will be confined to the northern Rockies).

Below: Here is snapshot of the current % of normal SWE (Total water) for the west (Total amount of water if you melted the current snowpack). You can see that the northern Cascades of Washington are at 100% of normal (Mt Baker). Those numbers are likely the higher elevations or peaks of the mountain ranges versus an actual snapshot of current snow at the ski resort (Mt Baker Ski Area had a 40 inch base earlier in November with many rain events since).  The Tetons and northern areas of Colorado are just over 50% (Some good upper elevation events). Further south is much less (35% in the San Juan range). The Sierra Basin (Northern areas) are sitting near 47% but that was from 1 storm that produced heavy snow at the summits and very little snow or rain at lower elevations in early November. This early in the season can widely impact these numbers, so even 1 storm can SKU these numbers. 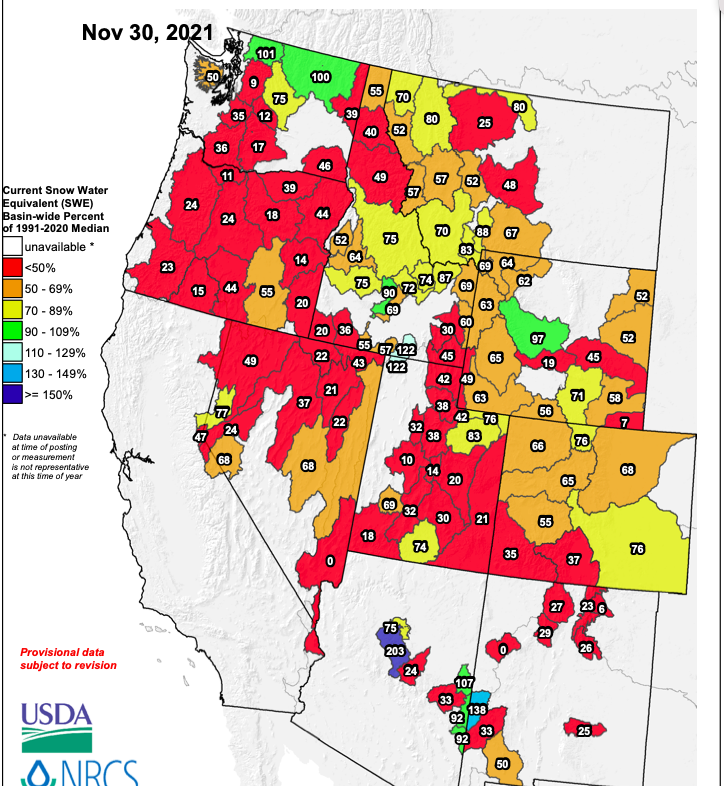 In the short term forecast, look for rain/snow to continue heavy at times for the northern coastal ranges of BC, (Moderate event for Whistler with rain from mid to lower elevations). Further inland resorts near Revelstoke and north to Rogers Pass will see snowfall above 2,000 meters (Upper elevations). Amounts at the summits could range from 12-18 inches from Tuesday to Thursday.  In Alberta temps will be slightly cooler so Banff Sunshine Village may stay all snow (At the base or slightly above). The temps even at 10K feet are still warm by picky powder seekers might use caution due to the warm nature of this atmospheric river. Higher elevation resorts might be worth chasing. Colder air filters in on Thursday so it’s possible that wet snow initially Tuesday/Wednesday get coated with 4-9 inches of decent quality for your first turns Thursday. Much colder air follows in the extended.

Below: Very heavy snow at the peaks (Highest spines of the coastal range) in northern BC through Wednesday night (160CM). Further south will see less snow, slightly warmer temps keeping snowfall confined to the summits. Inland areas will see moderate to heavy snow above 2,000 Meters at Revy and even Alberta Resorts. Decent amounts will fall at the summits, with moderate amounts in Alberta due to the higher elevations. Slight cooling Wednesday PM to Thursday might offer some lighter density for 1st chairs. 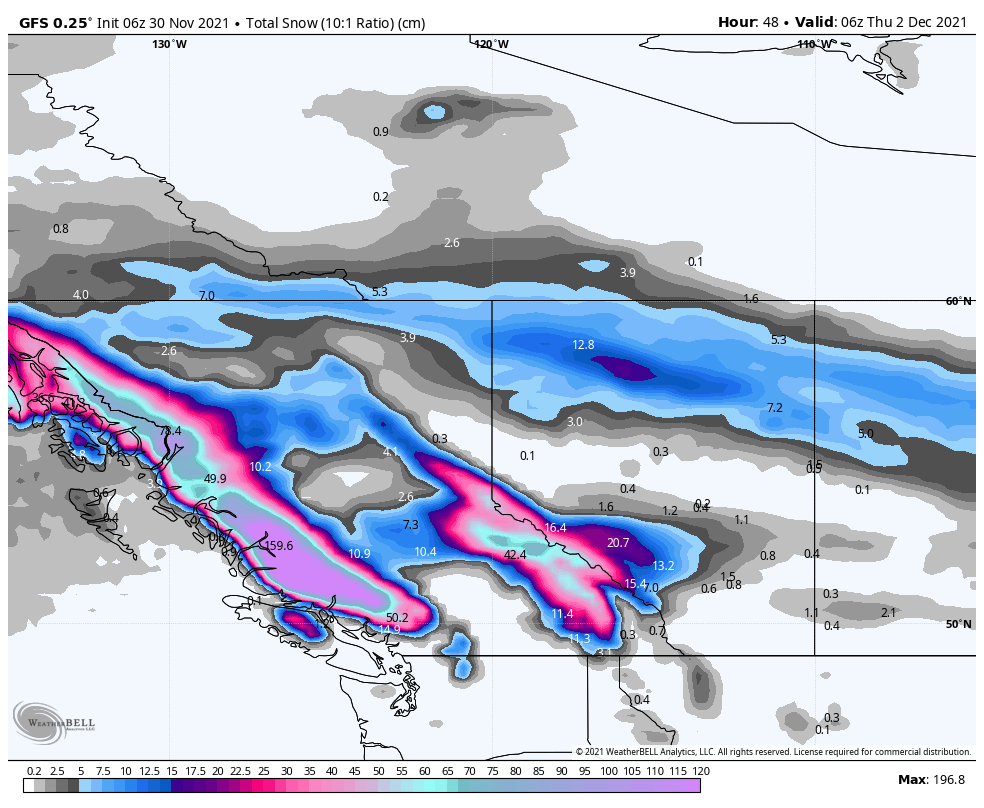 Below: You can see the cold front entering BC late Wednesday night into Thursday morning. This might produce some snowfall to lower elevations as the front passes for some good turns for Thursday. Most of the moisture will be weaning as the front passes. Some cooler air is also going to bring some light snow to the Cascades of Washington with this passage.

The extended has good news so don’t give up yet!

Cooler air will infiltrate the Rockies and the Cascades of Washington early next week. Snow will return to these regions in the Monday-Wednesday timeframe. This system is not overly cold, but cool enough to bring some snow for many ski resorts. Currently the models are showing a moderate event Is likely favoring north central mountain locations (WA, ID, MT, UT, WY, CO). There are colder pockets of air that might stay north of Colorado forming higher amounts over the Tetons or perhaps Montana. Bottom Line: High confidence for a cool down early next week. Moderate confidence for widespread snowfall for the northern PNW, and most of the Rockies (Northern areas might fare best).  Low confidence on amounts this far out (Thinking it’s a 5-10 inch event but lets wait for more data). It’s not overly cold so that might keep amounts low especially at the bases.

Below: Cold front and weak trough entering the Rockies and areas of the PNW early next week. Unfortunately the Sierra and areas of Oregon may stay dry. Light to moderate snow will ensue over much of the Rockies favoring northern regions. Slightly colder pockets of air might set up near the Tetons driving snow to near the bases. 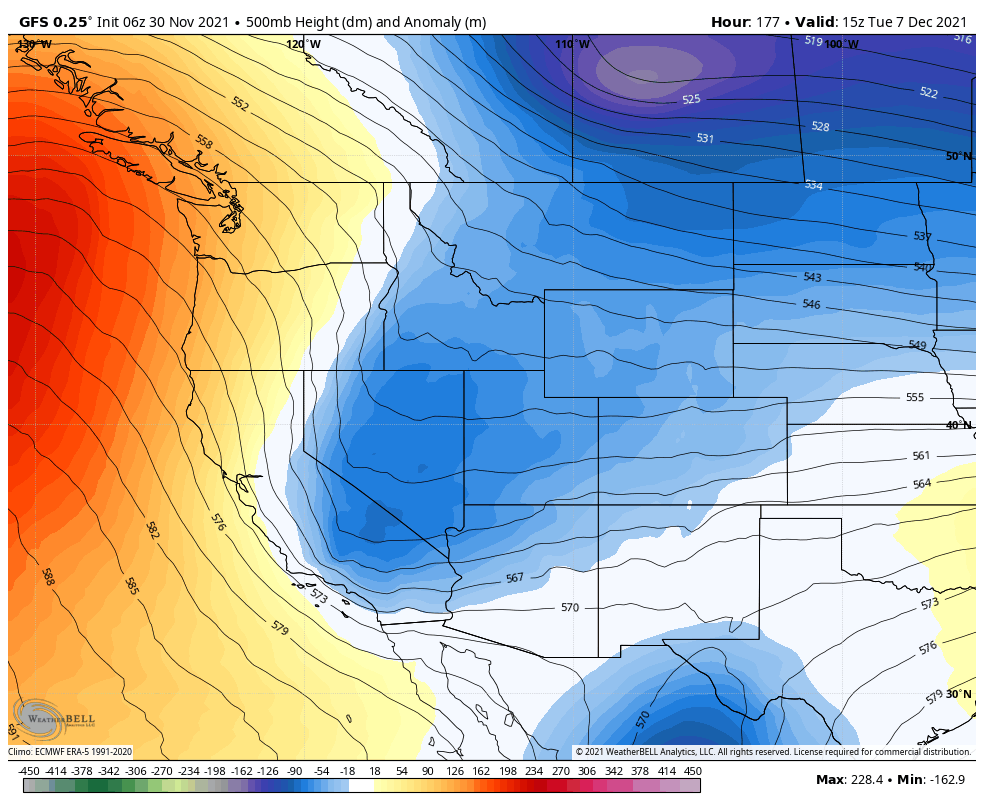 But wait!  Another stronger system is on tap for the end of next week that could be a game changer to stent our long month without snowfall for some areas.

Below: Deeper storm is likely for the end of next week that may dig south as an open trough impacting many areas of the west including the 4 corners and Sierra. This could be a decent storm well worth watching. 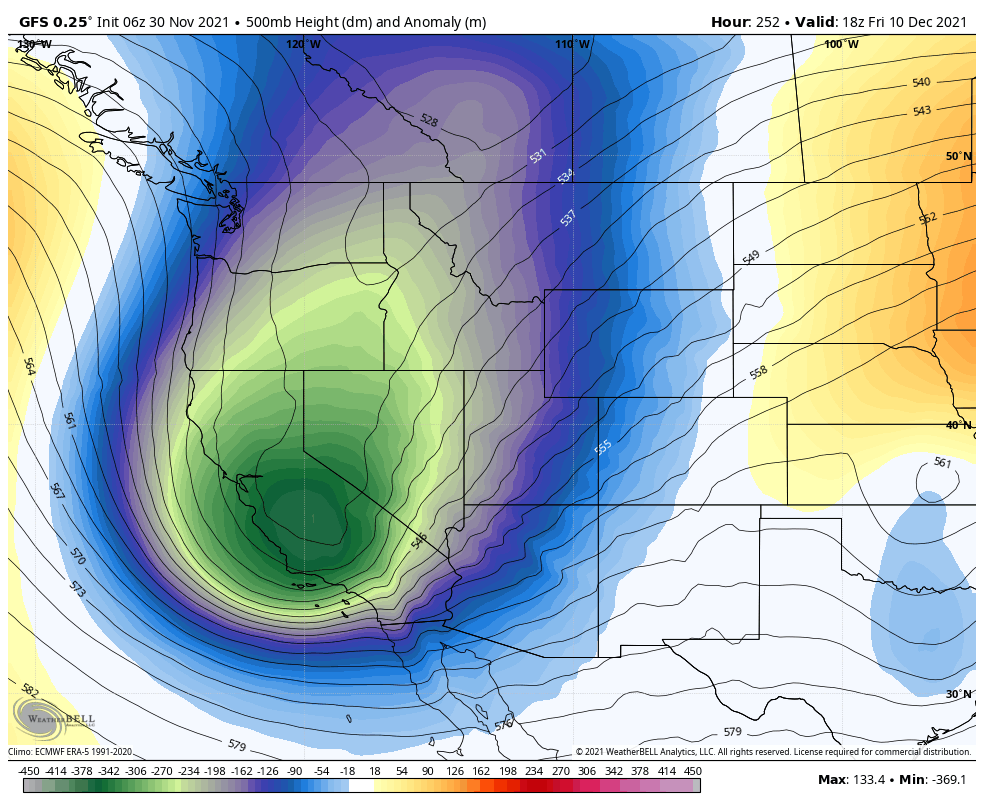