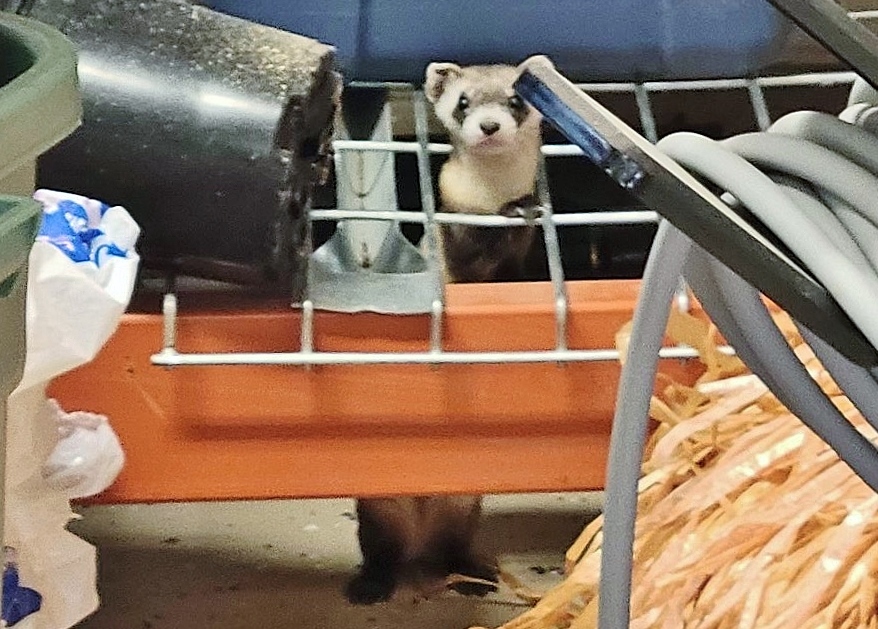 Did you know that the black-footed ferret is the rarest mammal in North America? They’ve been given this title because the species is extremely endangered. WWF estimates that 300 ferrets are alive in the wild today, and that’s only because of concentrated efforts over the last 30 years to restore the population.

Colorado Park & Wildlife shared a cool story last week about a homeowner who found one of the rare ferrets hanging out in his garage. Must have been crazy to find a wild ferret just rummaging through his stuff. I honestly have never even heard of this species before reading the story.

Watch video of the black-footed ferret release taken by @COParksWildlife Officer Cassidy English after she and Officer Travis Sauder hiked deep into a prairie dog colony in the dark Monday on the Walker Ranch near Pueblo West. (3/4) pic.twitter.com/fWfryRFay7

PUEBLO WEST, Colo. – An endangered and extremely rare black-footed ferret made a surprise appearance in a homeowner’s garage in Pueblo West on Monday.

The home is near the sprawling Walker Ranch where Colorado Parks and Wildlife has been releasing black-footed ferrets on a prairie dog colony as part of a major conservation effort with the U.S. Fish and Wildlife Service (USFWS) and other partners to restore the rarest mammal in North America.

Since 2013, more than 120 black-footed ferrets have been released on the Walker Ranch by CPW biologists, who have invested extensive time and effort to monitor the colonies and distribute plague vaccine in hopes of protecting the black-footed ferrets and the prairie dogs, which is their primary source of food and shelter.

Reintroduction efforts were put on hold during the COVID-19 outbreak to protect the ferrets from possible exposure to the virus. They recently resumed and, two weeks ago, nine ferrets were set free in a 1,600-acre prairie dog colony south of U.S. Highway 50 on the ranch.

On Monday night, CPW received a call from a nearby homeowner that a ferret was in his garage.

By the time CPW Officers Cassidy English and Travis Sauder arrived, the homeowner had coaxed the ferret into a box.

English and Sauder quickly contacted CPW terrestrial biologists to confirm they, indeed, were holding an endangered black-footed ferret and to decide what to do with it.

Each black-footed ferret raised for release has a passive integrated transponder microchip, called a PIT tag, inserted between its shoulder blades. These common internal microchips contain identifying information that can be read with a scanning device.

English and Sauder contacted the Humane Society of the Pikes Peak Region and an officer responded with a portable scanner. It confirmed the ferret was one of the nine recently released.

Photos of the ferret were sent to U.S. Fish and Wildlife Services biologists who determined the garage-crashing ferret appeared healthy and could be taken back onto the prairie dog colony and re-released.

More video of an endangered black-footed ferret peeking out of a prairie dog burrow after it was re-released Monday night. It was among 9 black-footed ferrets released by @COParksWildlife biologists 2 weeks ago in ongoing efforts to recover the rarest mammal in North America. 4/4 pic.twitter.com/g6QWu1CeCi

With the blessing of ranch owners Gary and Georgia Walker, English and Sauder took the box and hiked deep into the prairie colony in the dark, opened the box and watched the ferret scurry into a prairie dog burrow.

“We don’t know exactly why this black-footed ferret left the colony,” said Ed Schmal, CPW conservation biologist. “We put them into prairie dog burrows but they may not stay. Sometimes they scramble around the colony to find the right home. This one might have gotten pushed out by other ferrets and it went looking for a new home. We really don’t know.”

Schmal said CPW has only received one other report of a black-footed ferret leaving the ranch. But it has never heard of a ferret entering a garage or similar structure.

“This is extremely rare,” Schmal said. “Black-footed ferrets are nocturnal and extremely shy. For some reason, this one left the colony and was seeking shelter. We’re just glad it appeared healthy, not starving or sick, and we were able to capture it and return it to the colony.”