Significant snow is still on tap for the Front Range of Colorado, with decent spillover into the western mountains late this weekend. Timing is a bit slower on this storm. Models are still posing some questions. Make sure to follow our forecaster @lstone84 on Instagram for additional coverage from our chases.

A significant storm is very slowly going to move east of California late this week setting up near the 4 corners by Saturday. The models are slowing the progression of the low slightly with the highest precipitation rates for Colorado on Saturday mid day through Sunday. 2-3 inches per hour are likely, especially late Saturday into Sunday. The models show varied differences on snow totals. The European is further north with less moisture depicting the foothills near Boulder at 15-20 inches. The American Model (GFS) continues to place the low further south pumping higher quantities of liquid directly over the Front Range Foothills and adjoining mountains along and just west of the Divide. In fact, the GFS after decreasing snow totals from 50-60 inches to 20-30 has up trended again. Splitting the differences in the model runs leads to my forecast of 20-35 inches for Rocky Mountain National Park, Red Feather Lakes, Georgetown, Coal Creek Canyon and perhaps Nederland (Eldora). Sometimes with east flow the mountains just below Ned see higher amounts than the Ski area itself.

Below: The bullish American Model (GFS) showing 3-4 feet for the northern front range of Colorado. Decent amounts also showing up west of the Divide along I-70. This would be impressive if this model proves correct. 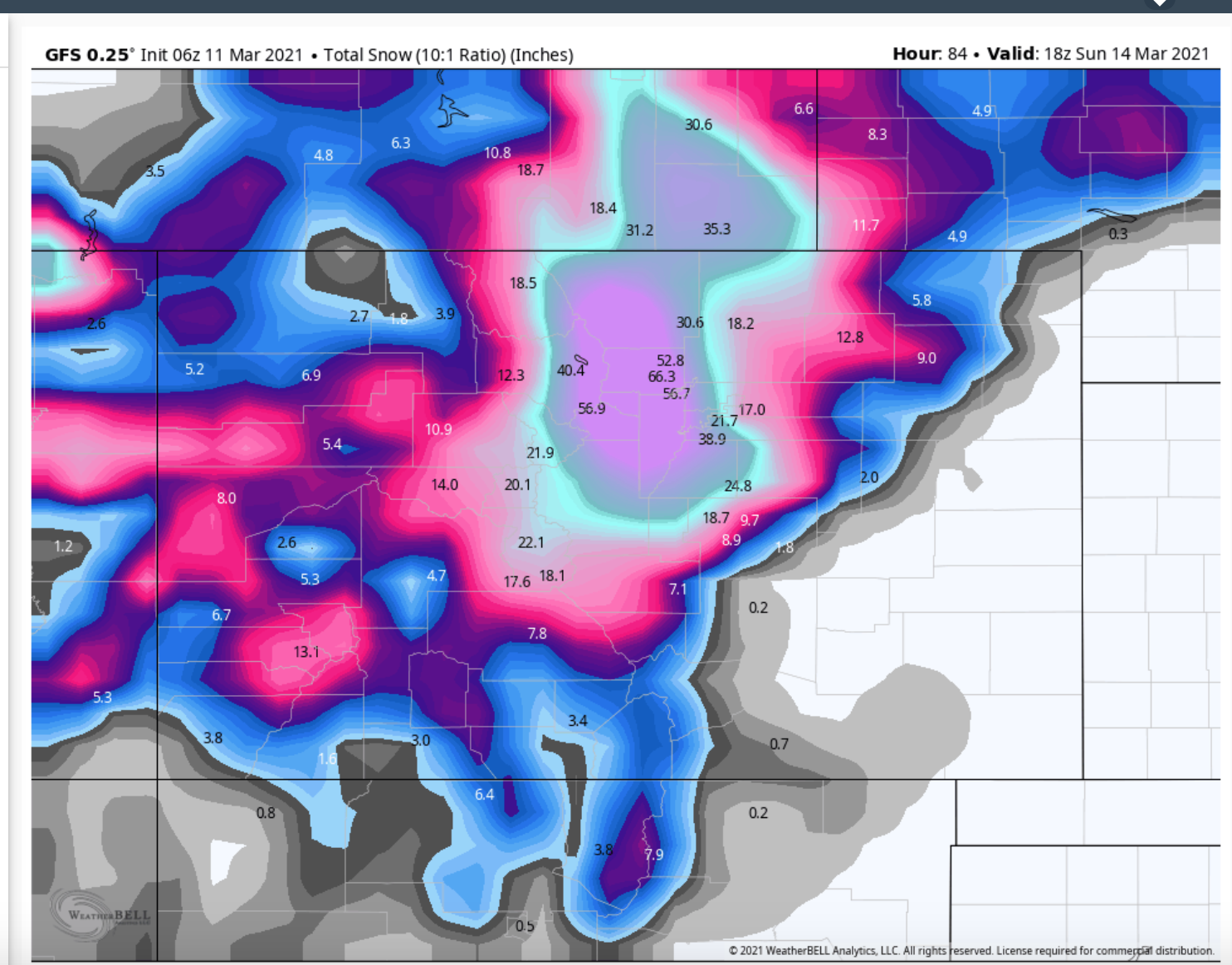 Below: The European model showing lower totals especially west of the Divide. 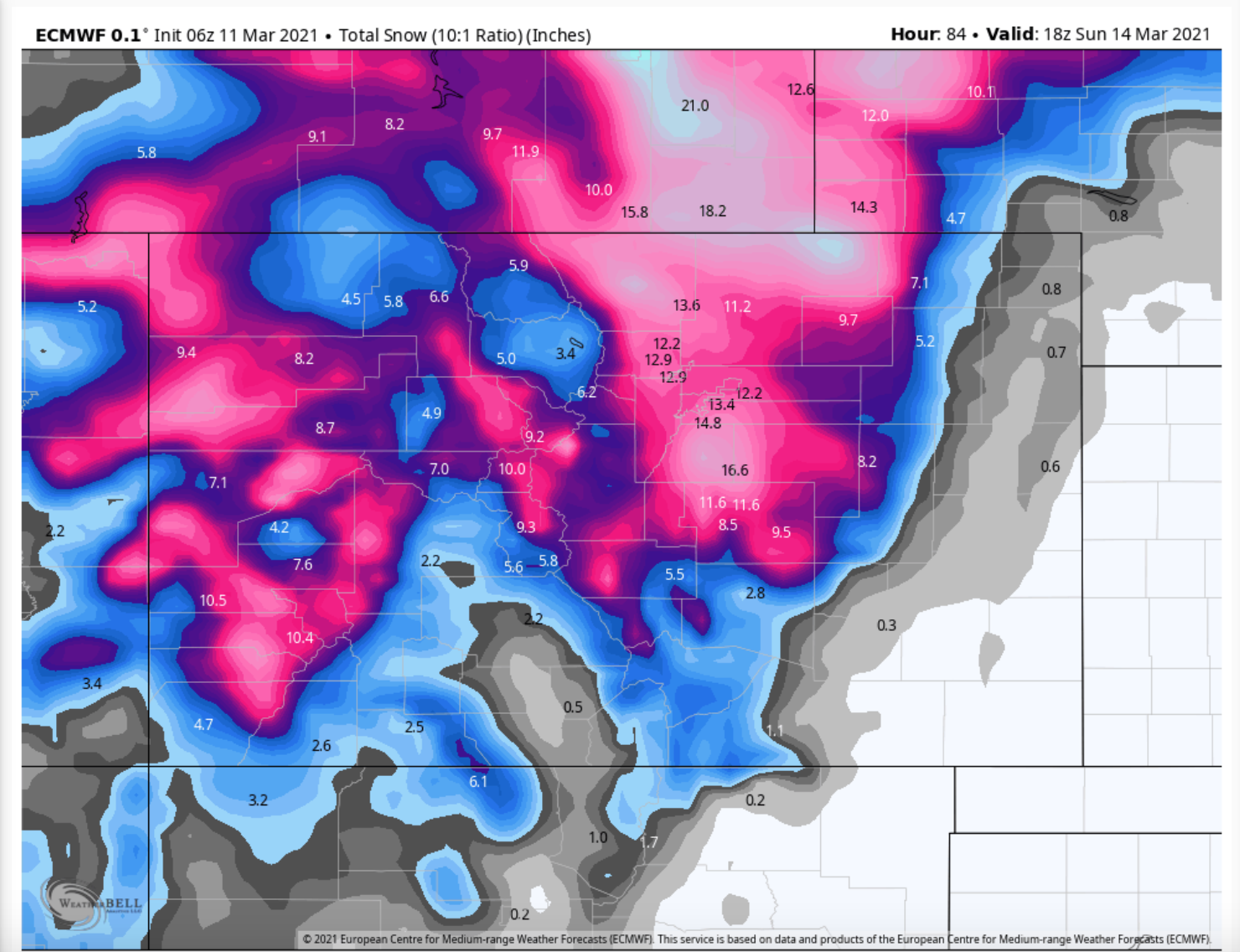 Below: The NAM 12 often underestimates totals is showing this low ever further north or east trending a bit closer to the European solution. This would mean less snow for areas south and west including Summit County and only 1-2 feet for the Front Range (Lower confidence on this model currently). 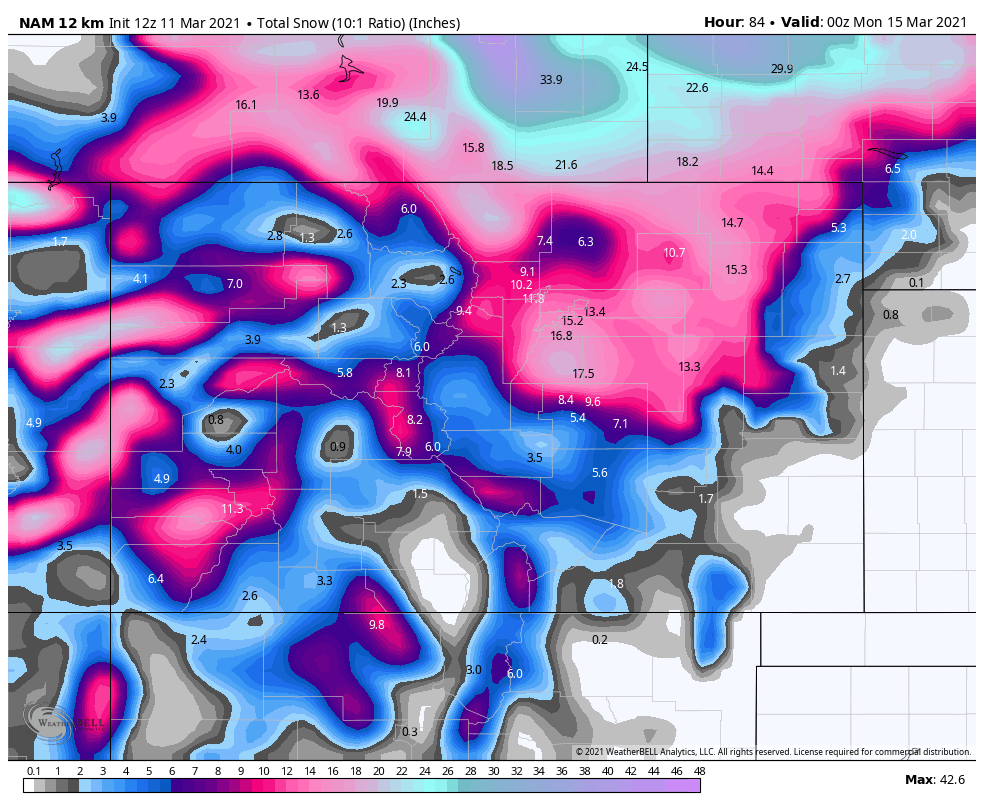 For the Ski areas in Colorado, all mountain ranges will grab freshies. Timing will be key to chasing powder this weekend. The southern mountains near Telluride, Purgatory, and Silverton will see light to moderate snow earlier in the period (Friday-Saturday) and decent snowfall perhaps on Sunday morning (Includes Aspen) with winds taking a more N or NW direction. The resorts just east of the Continental Divide will see the highest totals mid Saturday to early Sunday (15-30). This includes Winter Park, Eldora, Loveland, and A-Basin. If the European model trends more accurate there may be less snow, especially as you get closer to the Divide. All the models seem to agree that the San Juan Range favoring the western regions will see decent snow totals through Sunday (9-15).

Below: University of Utah ensemble runs (Multiple tweaks to the models) showing an average of 20-30 inches through Sunday for Berthoud Pass. Some of the lines are below the mean while some are above with even higher amounts. 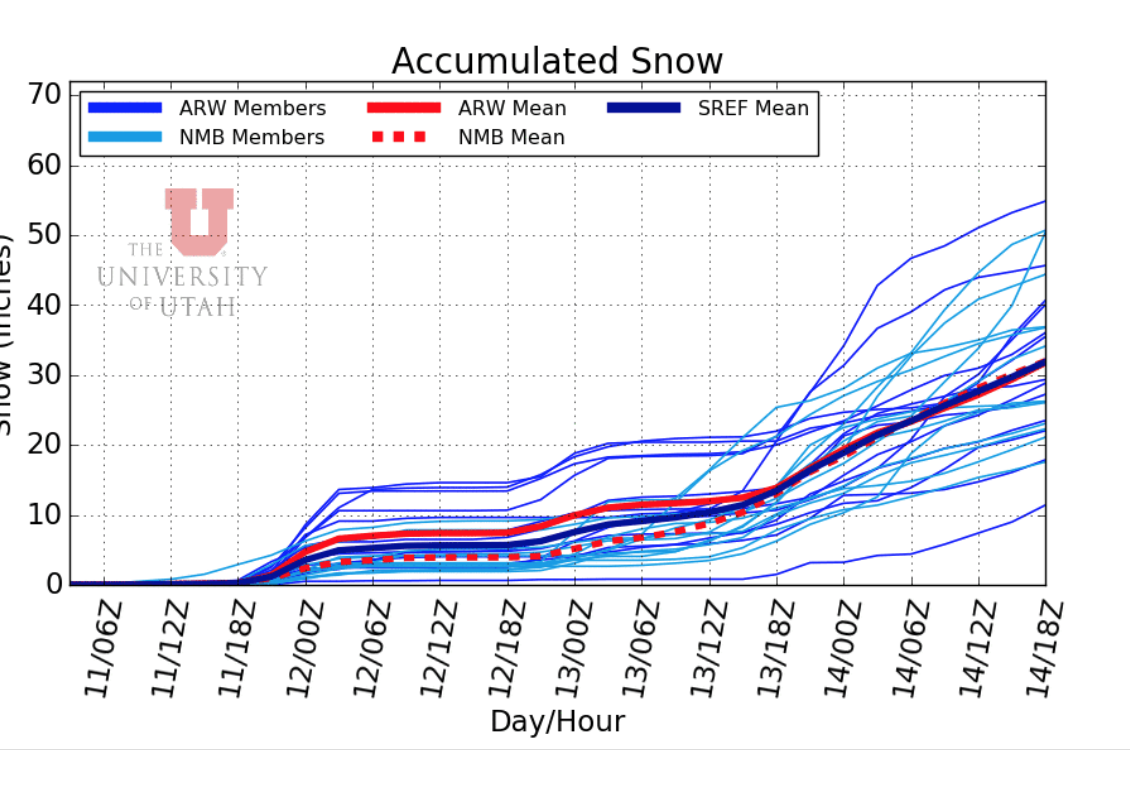 The mountains west of the Divide should do well late Saturday night into Sunday as winds west of the front shift to a more northerly or northwest direction. This includes Copper, Vail, Beaver Creek, and Aspen (10-15) Summit County being so close to the Divide with strong easterly flow will likely see higher amounts both Saturday and Sunday (2 feet plus).

*Still model differences on this storm. You might see 2 feet or 4 feet (Highest amounts near the Boulder     Foothills. Some surprise totals might show up near Aspen and the northern San Juan Range Sunday.

*Many mountains in Colorado will see decent snow totals especially by Sunday including the 4 corners.

*Peak snowfall intensity will be Saturday PM to Sunday AM.

*Be prepared to chase from the west side of the Divide for outlier surprises Sunday and possible road closures to the east.

Otherwise in the West, light to moderate snow is showing up in the models for Utah Thursday/Friday favoring the Wasatch Back (Park City mountains). Its possible that 5-10 inches fall during the next few days in isolated areas of the Wasatch. The Uinta Range further east in Utah will see higher amounts (12-18). Southern Utah may also be worth a chase for Saturday morning (6-11). Arizona is also on tap for some moderate snow near the Flagstaff early this weekend. There are some short term options for Utah.

Another low pressure system enters the west early next week. This will bring light to moderate snow back to the PNW, with perhaps higher amounts for the Sierra on Monday (quick mover). This will track over Utah and skirt some moisture back into the Tetons and Colorado.

Below: Monday pow likely for the Sierra Range

Below: This storm tracks over Utah by Tuesday but should also impact the Tetons and Colorado in the later periods.

Powderchaser Steve is headed for Alaska to sample the powder with Alaska Backcountry Guides. I am at 34K feet posting from my Alaska Airways flight to Anchorage. While I will miss this next impressive round of snow in my backyard of Boulder I hope to score some pow up north.