Significant snow is falling as forecasted in the Pacific Northwest with snow levels near the bases (Deep dense snow). That system will drag into the Rockies midweek. Another short wave moves into the Rockies on it’s heals. The PNW warms up significantly late this week (Rain) before frigid temps finally bring a good round of light density frosting to the dense snow that falls this weekend. The extended brings more snow to the Rockies next week.

Ride at the upper elevations for surf snow and an assurance of no bottom.  Faceshots might be a bit forced and clumpy. It’s likely temps remain near freezing for much of the day so it’s not likely rain will be an issue even at the bases.  I would say chase it if you are there! Warming happens late week.

Snow will continue on Tuesday with another similar storm likely for Wednesday (Slight warming).  Thursday may offer a break until a very strong and warm system slams into the PNW late this week. Significant snow is likely through Wednesday night.

In the Rockies significant snow fell into Monday morning for the lucky ones that precision chased to the Cottonwoods in Utah that grabbed 15-16 inches of snow. This storm came in with heavy density and finished cold (The perfect formula).  Most Utah resorts reported 4-8 inches per the original forecast.  I mentioned NW flow offering some surprises for the Cottonwoods. This storm over performed beyond my forecast on Sunday. Was I surprised to see 15 inches at Alta? Yes!  In fact, I missed the temporary road closure at Little Cottonwood. Most other locations were in the target forecast. The Tetons came in with 5-8 inches per the original forecast on Monday morning. In Colorado both Telluride and Steamboat came out winning the game with 8-9 inches on Monday (Both resorts were on my forecast for 5-9 inches).

The week ahead will bring another round of moderate snow for the Tetons late Tuesday into Wednesday with your wake up call in the 5-9 inch range (Perhaps similar to the last system). Some of the snow will have fallen during the late afternoon while lifts are spinning on Tuesday. I have good confidence on this storm.  The Wasatch has an average on the model runs in the 4-7 inch range by Wednesday morning.  West winds initially will shift to the NW Wednesday with continued snow showers through mid afternoon. Winds are lighter with less orographics than the last storm.  It’s possible that the Cottonwoods over perform to the 5-10 inch range by opening chairs Wednesday.  Some additional snow is possible during the day while the lifts are spinning albeit lighter intensity. Park City and resorts further north will see less (3-6).  The Good:  PM snow Tuesday to AM snow Wednesday. Outside wildcards for the Cottonwoods to exceed 10 inches.

For the Rockies, a second short wave albeit weaker system will bring a return of light snow to many areas of Colorado, Montana, Wyoming, and Utah on Thursday (3-5 inch refresh).

Below: Total snowfall for the west through late Wednesday.  Amounts in Colorado are slightly underdone. The heaviest snow will fall in the Cascades Tuesday migrating to the Wasatch and Tetons for Wednesday 1st chairs or tram. 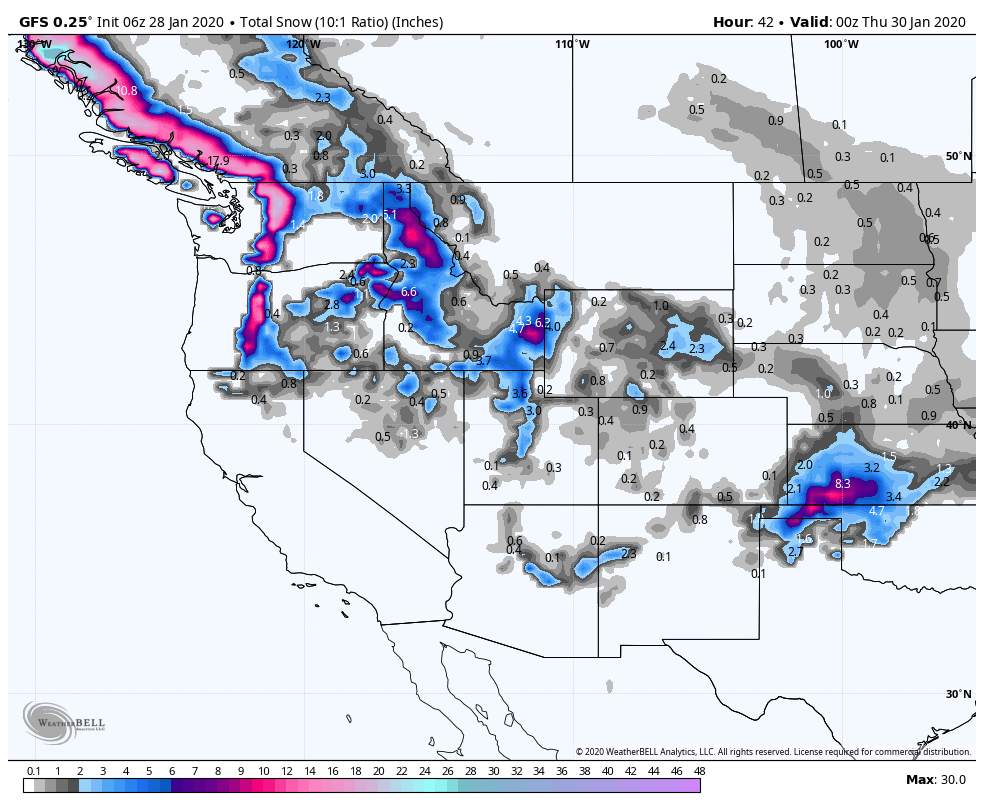 The  extended forecast brings a very wet and warm system to the PNW, BC Friday-Saturday (Rain).  Much colder air rolls in Sunday with rain changing to snow for Sunday/Monday in the Cascades. This will bring a moderate or perhaps stronger system to the northern Rockies including Montana, Wyoming, Utah, and most of Colorado for Monday.

Below: Low pressure over the Rockies Sunday night into Monday (Might favor northern areas). 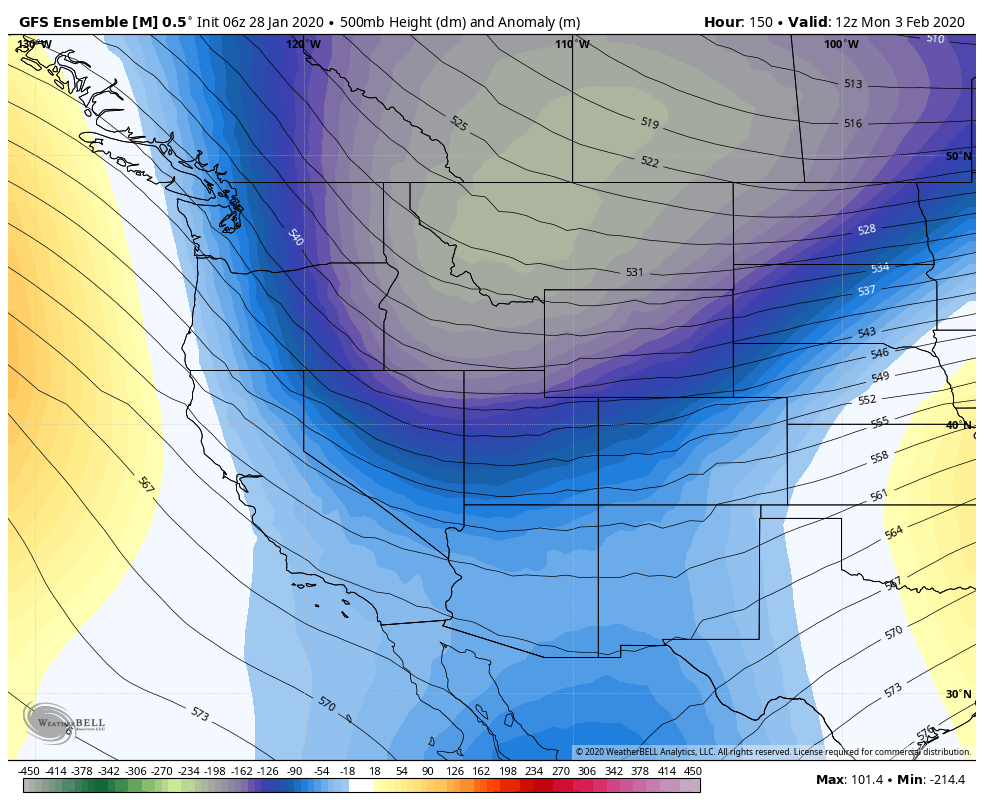 In the 7-10 day forecast ensembles are hinting at an unsettled pattern to begin late next week perhaps bringing a good chance of more significant snow by the following Friday (10 days out) for the Rockies.

Below: Ensembles showing a trend for low pressure to impact the west late next week (Map- Friday February 8th). 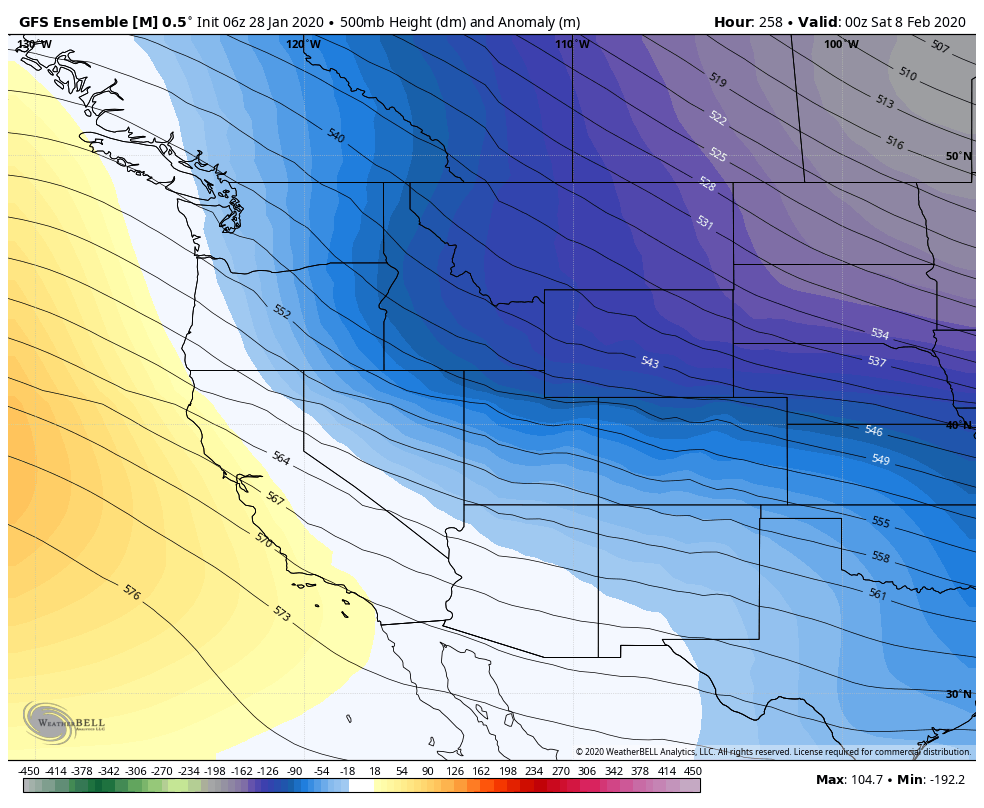 Enjoy the powder everyone and please support our forecasts through the Concierge program that will land you the deepest snow!