Yesterday NOAA dropped a bombshell announcing that they now believe that La Niña conditions will persist through the 2017/18 winter. So with this meteorological phenomena in mind we’ve compiled a group of resorts you should consider checking out this season.

*Disclaimer: Readers are not guaranteed pow days at the following resorts between December 2017 and April of 2018.

Top 10 Ski Resorts To Hit Up This Season

Jackson Hole has already recived 82″ of snowfall this season and the resort is not even open yet. Jackson typically benefits from systems from both the north and south, making it mostly weather neutral. Still, if the sister does show up, Jackson can expect steady, cold snowfall from the north. 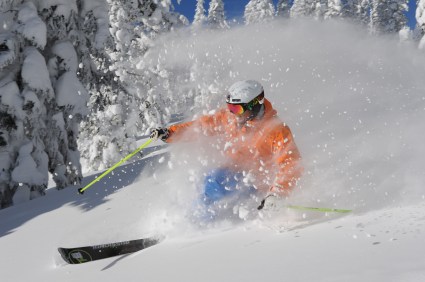 When the weather systems line up just right,  Steamboat Springs can look more like Japan than Colorado and locals are hoping that’s the case for 2017/18. If La Niña does show up, look for the northern Colorado ski resort to receive the lion’s share of CO’s snow.

Like Jackson, Grand Targhee benefits from both northern and southern systems. But unlike Jackson, the ‘Ghee gets even more snow on its western slope year-in and year-out. Grand Targhee was also named as one of “The 5 Best-Kept-Secret Ski Resorts in the U.S. | According To The WSJ“. So it’s got that going for it…. which is nice.

Locals are hoping for a season filled with the famed “cold smoke” this upcoming season. Cold smoke + killer hike to terrain @BridgerBowl makes for some of the best resort-based adventure skiing in the lower 48. Just remember to bring your beacon.

Related: Man Freaks Out At Bridger Bowl Because He Doen’t Have A Transceiver To Ski Schlasmans Lift (NSFW)

When it comes to the PNW, Crystal Mountain offers the most vert for your buck. Also, WA is heavily favored during La Niña years and when it comes to resort skiing, Crystal stands out as the favorite.

While the east coast is projected to have Equal Chances of an average winter, the Upper Peninsula of Michigan is forecasted to receive a crazy amount of lake effect snow. Don’t think of Mount Bohemia as just the another midwestern ski area– it’s not.

Watch: Mount Bohemia’s ABBA Backcounty Bus Is One Of The Funniest Things In Skiing

Since being added to the Mountain Collective, Revelstoke Mountain Resort is now the new bucket list item for skiers across North America. Also, the interior BC resort boasts the biggest vert in North America as well as the most time spent riding vs. riding chairlifts. Just make sure you get your squats in this preseason or you will be cooked after the first day.

When the last La Niña rolled through, Mt Baker walked away from the season with over 857″ of snow! Fingers crossed.

Whistler Blackcomb, like Mt Baker, is a perennial favorite during La Niña winters. Also, people are looking to get in the last local season before Epic Pass holders invade by the thousands.

With two crucial lifts being replaced this last season, Big Sky is turning the corner as one of the premier resorts in North America. From Lone Peak’s big mountain lines to awesome tree skiing with nobody around, Montana’s biggest ski area is a throwback to how Jackson was 10 years ago.