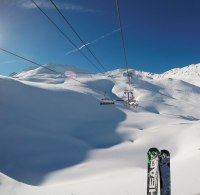 Summer skiing is in climate change’s crosshairs and one French ski area is preparing for the loss of glacial skiing by building one of the biggest indoor ski slopes in the world.

According to The Telegraph, Tignes plans to build a 1,300′ long indoor ski slope at an altitude of 5,600′. The €62,000,000 French facility named “The Ski Line,” is less a competition with Dubai’s legendary indoor ski venues than it is a way for the local region to hedge its bets against a warming climate. The mayor of Tignes says that the Glacier Motte has lost 30% of its skiable acreage in recent years.

“The Ski Line is a kind of Disneyland theme park.” – Hervé Billard, FRAPNA (*Quote courtesy of The Telegraph)

“The Ski Line” will also host an indoor waterpark with 6′ waves for surfing, a mall, and Club Med hotel. It would be powered using a combination of hydro and solar electricity. Already scores of environmentalists have expressed their opposition with one member of The Rhône Alps Federation For The Protection Of Nature comparing it to building disneyland in the middle of an otherwise beautiful alpine valley.

Find the entire article here: Why is a leading Alpine ski resort building an indoor slope?