While taking the kiddos skiing is anything but cheap, the high price does not justify stealing public funds in order to make childhood powder dreams come true.

Related: Irish Turf Skier Gets Hit In The Jewels…

According to the Daily Mail, that’s exactly what happened when a group of wealthy British parents misused a portion of approximately £1 Million in taxpayer funds to take their children on fancy ski trips– all the while decked out in the freshest gear. The group is reported to have taken advantage of funds acquired through the UK’s Government’s Gift Aid program.

The charity received £1 million pounds in taxpayer funds over the course of the past five years.

Known as the Skier’s Trust Of Great Britain, The fund advertised itself as a way to further the dreams of olympic hopefuls but instead took their children on fancy skiing trips without the direction of an olympic training program. The charity is now being restructured to pool funds in order to have greater oversight on how “charitable” funds are utilized down the road. 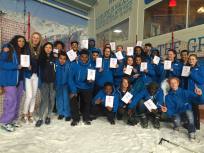 A press release from the fund’s website promises to shore up the charity’s practices saying, “the Trustees are acutely aware of the need to rebuild the confidence of the skiing community and are all set to undertake this task as the first and foremost able bodied skiing and snowboarding charity.” The charity also supports Snow Camp, which is a program to get inner city kids involved in winter sports.

About Skier’s Trust Of Great Britain

The Trust was founded by General Sir Roderick McLeod GBE., CBE., DL. who was chairman of the National Ski Federation of Great Britain for many years and Mr Nathaniel Garrett, managing director of Lillywhites department store; a further five members of the council were appointed soon after. Amongst these council members were The Rt. Hon. Lord Hunt of Llanvair, famous for leading the first successful expedition to reach the summit of Everest, Brigadier V.A.P. Budge, CBE., MVO who after leaving the forces dedicated the remainder of his life to Nordic skiing and the Trust

Find the entire Daily Mail article here: Ski charity fund used by rich parents to slalom round the tax laws and finance trips to luxury Alpine resorts for their children is axed