Related: Patagonia’s New Jacket Will Be Made From Spider Silk

Using the newly developed Kernza® Perenenial Grain, Patagonia just released Long Root Ale with the help of Urban Brewery out of Portland Oregon. A northwest style pale ale, the newly developed brew boasts some revolutionary origins that are sure to shake up the beer world. 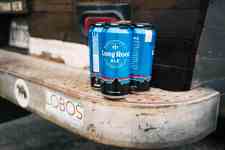 Coming to a tailgate near you… | Photo Credit: Patagonia Provisions

Developed by The Land Institute in Salida Kansas, the Kernza® Perennial Grain has roots that are deeper than the normal grain. That depth allows the grain to use less water, removes the need for replanting, and prevents soil erosion. Also, those deep roots don’t require pesticides and the grain itself removes more CO2 from the atmosphere than the competition!

“With its wonderful tradition and history of bringing people together, Patagonia Provisions saw an opportunity to use such a widely influential product to tell the story of organic regenerative agriculture, via Kernza®, to a wide swath of people with a product we can all enjoy and get behind. All it takes is a small tweak in the way we make our beer to effect big change – we are hoping this message reaches the big brewers of the world.” – Birgit Cameron, Sr. Director Of Patagonia Provisions

This is the first commercial use of the Kernza® grain and executives at Patagonia Provisions are hoping the grain becomes a mainstream among brewers everywhere.

Find the entire Patagonia Provisions release here: Saving the planet, one beer at a time. GEAR: The Mullet Of Puffy Jackets Brought To You By Patagonia