As skiers and snowboarders brace for a snowy winter ahead, a handful of ski areas are hustling to finish a series of new developments for their skiing and riding faithful.

Whether these developments include new chairlifts, gondolas, or restaurants, the 2016/2017 ski season will have a variety of new offerings from the east to the west and everything in between.

JHMR just continues to break ground and this summer, resort officials are looking forward to a newly built Sweetwater Gondola. Repalcing the outdated Sweetwater Triple, the gondola will transport skiers to an area just above the Casper restaurant. Locals are really hoping this pushes intermediate skiers out of tram line and towards the north side of the ski resort.

Titled, “The Green Peak Expansion,” Waterville Valley’s first expansion in roughly 30 years will add 45 new acres in addition to a fixed grip triple. The expansion is set to cost the ski area $2 million and should be ready in time for the 2016/2017 ski season.

The Grand Canyon Express will be the first high speed chairlift @Arizona Snowbowl for the 2016/2017 season.

Mt Bachelor is about to widen its reach after implementing its new Cloudchaser Lift. The new high-speed detachable quad will add 635 acres to Mount Bachelor’s already famed terrain for the first time in over 20 years.

Related: Mt. Bachelor To Install New Lift For Next Season!

Vail’s Back Bowls To See New Sun Up Lift

Except for the Sun Up Lift, Vail has become a center for High Speed Quads. However, the Sun Up Lift in Vail’s famous back bowls will be replaced, giving the mega ski resort one less classic chair. 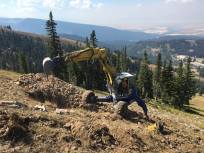 Since 1974, the Blackfoot Lift has been largely left alone. That changes this ski seas as the Wydaho resort plans will replace the lift with a fixed grip quad, effectively cutting the ride time in half.

Whistler Blackcomb is going through some serious cha-cha-cha-changes after getting acquired by Vail Resorts. Currently, no announcement has been made as to what developments Vail will pursue immediately but officials believe the previously proposed $8 million in improvements will continue as planned for the upcoming 2016/2017 ski season.

In addition to the Roundhouse update, Whistler will add new magic carpets and snow making systems to beginner areas.

The Blake Hotel has been in the works ever since Taos was sold and finally, the Hotel will stand tall amongst a revamped base area. The building is named in honor of TSV founders Ernie and Rhoda Blake. The new hotel is scheduled to be operational this coming fall.

“Construction of a new hotel, The Blake at Taos Ski Valley, represents the first step towards upgrading the quantity and diversity of lodging options at the resort.” – Taos Ski Valley

Wilmot is replacing three lifts with quads as well as adding a new surface lift to offer better access to its terrain park. These improvements come on the heels of Vail’s recent acquisition of the midwestern ski hill.

In its second year of operation, Utah’s Cherry Peak Resort will add a chairlift to access the 7,050′ summit.

Purgatory is adding a new surface lift that is akin to the rope tow @Alta, added snowmaking, as well as a smaller, side trail for the upcoming season.

“This fall, Purgatory is installing a new surface lift on the backside of the mountain, which will provide access to Legends Express high-speed detachable quad from some of the best fall line skiing on the mountain.” – Ed Youmans, VP Of Mountain Operations