Coming To A Ski Area Near You... | 9 Major Developments Happening Right Now

Coming To A Ski Area Near You... | 9 Major Developments Happening Right Now

Over the course of each summer, ski areas revamp their offerings to stay relevant in a world of six-person bubble lifts and 5-star on mountain dining. And while many skiers will lament the loss of their favorite fixed-grip triple, change is inevitable and what better way to beat ’em… than to enjoy ’em?

Following a successful construction of the Teton Lift, JHMR is keeping the ball rolling by beginning construction on a newly designed gondola. The new gondola will replace the Sweetwater lift and span from the base area to just above the Casper restaurant. Resort officials believe the project should be completed in time for the 2016/2017 season.

The new Sweetwater Gondola will also support several specific objectives; to significantly increase out of the base area capacity, and over time to provide access to a new and enhanced children’s ski school facility located in the Solitude mid station area.” – JHMR Press Release

Back in February, Whistler Blackcomb announced they would be investing $8 million in improvements for the upcoming 2016/2017 ski season. So far the biggest portion of that investment appears to be going towards improving the Roundhouse restaurant by adding 160 outdoor seats and 6,000 sq. feet to their “glacier view” deck.

Long known for its throwback 70’s vibe, Taos’ base area is getting a serious update. After tearing down many of the oldest buildings in the village, construction began almost immediately on several key buildings. The Blake Hotel is one of those buildings. Named in honor of TSV founders Ernie and Rhoda Blake, the new hotel is scheduled to be operational this coming fall.

“Construction of a new hotel, The Blake at Taos Ski Valley, represents the first step towards upgrading the quantity and diversity of lodging options at the resort.” – Taos Ski Valley

Private powder got termed when the Yellowstone Club was first created in the 1990’s. That private experience is getting even more cushy as a series of 48 luxury residences are being added to the YC real estate holdings.

Resort officials are making waves this summer @BigSkyResort as the Montana resort announced earlier this year that it would be replacing the 2-person Challenger lift with a fixed grip triple. Also, the Lone Peak Triple will be replaced by a detachable, six-person bubble lift.

In addition to the two lifts, rumors are circulating that the Stagecoach lift @MoonlightBasin may be completed this summer as well.

It’s been 10 years since a new chairlift was installed on the slopes of Mt Bachelor and it appears as though the newly designed Cloudchaser lift will break that streak as construction continues this summer. With 635 newly added acres of skiable terrain, Mt Bachelor will be the 5th largest ski area in the USA next year!

Find out more here: Mt. Bachelor To Install New Lift For Next Season!

Vail – Sun Up Lift To Be Replaced 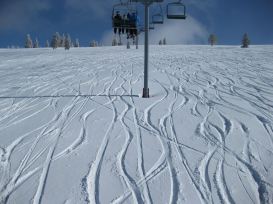 Over the summer, Vail will replace the Sun Up triple with a high-speed quad. With the new lift, skiers will be able to reach the Back Bowls in just 4 minutes.

Construction of a new restaurant at the summit of the Peak 7 chair will begin this May and continue throughout the summer. Breckenridge‘s new dining option will be located at approximately 11,000’ and provide guests with everything from slices of pizza and beer to Mediterranean cuisine.

Big things are in the works for Vermont’s Mount Snow. Currently, the southern VT ski area is working to complete an new Carinthia Base lodge as well as improve snow making capabilities by creating a new 120-million-gallon reservoir.