The Top 10 Places To Ski This Easter Weekend

The Top 10 Places To Ski This Easter Weekend 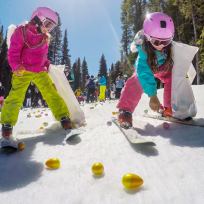 Instead of filling a pew this Easter Weekend, fill your face with some powder in honor of your lord and savior, Warren Miller. And if you happen to be in the area, it looks as though Colorado will have some bluebird pow turns on Sunday morning– Hallelujah!

It’s looking like a sunny Easter Sunday @SquawValley and if the High Camp Pool is rocking, you can’t go wrong with spring skiing in California. Also, palisades sessions, eagles nest, and other famous lines have been going down all week. So in the words of Pitbull– “don’t stop the partaaaay”

Out of the latest storms cycles, it appears as though Monarch Mountain looks to benefit the most with up to 19″ of snow by Sunday morning, when it goes blue…

Jackson has been on the good side of Ullr’s wrath this March and with all the snow, Easter service at the top of the JH tram has never looked better.

Another Colorado wildcard, Arapahoe Basin looks to get some significant snowfall out of the system forecasted to move into the front range of Colorado by Saturday night.

Mary Jane in springtime is strangley reminiscent of Kodiak Valley from Hot Tub Time Machine. The look is straight 80’s and the beer… like Clear Creek, flows heavy in the springtime.

Taos’ season to remember is close to being considered kaput. That said, Easter weekend might be the last time for some New Mexico locals to enjoy the Ridge, St Bernards, and Kachina Peak before resort officials call it quits.

With snow giving way to sunny skies by Sunday, could there be a better place to ski than the Beav on Easter Sunday? Cookies… Who’s got my cookies!

Mt. Hood is having a hell of a year. So what better time to enjoy the 461″ they’ve received this year than on March, 27th?

Whistler Blackcomb has already had a season for the record books. Although inital forecasts called for a less than average winter due to El Nino, Whistler has bucked NOAA and received 470″ this season! Bottomline, everything is open (for the most part) and spring skiing in BC is all-time this year.