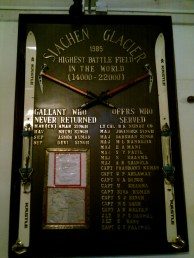 Related: Indian Soldier Found Alive After Buried Under 25 Feet of Snow For 6 Days!

An amazing story of survival has ended tragically as the BCC is reporting that avalanche survivor, Lance Naik Hanumanthappa Koppad has died in a hospital in New Delhi. The Indian corporal remained alive after an avalanche left him buried for 6 days under 35 feet of ice and snow on the Siachen glacier in the Himalayas.

Indian officials originally claimed that there were no survivors from his army post but when they set out to recover the bodies, they found Hanumanthappa Koppad alive. After his discovery, he was transported to a hospital in New Delhi, where he remained in critical condition

Often known as the highest battleground on the planet earth, The Siachen Glacier marks the boundary between India and Pakistan. That boundary is hotly disputed and has served as a locale for various armed conflicts. However, in past years, avalanches and landslides have been the main cause of death in the region.

Unfortunately, the survivor’s miraculous tale has come to an end today as he passed away due to a deteriorating case of pneumonia and a “blood clotting problem.”