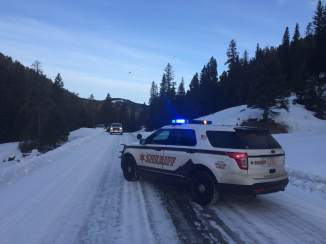 When 20 year-old, Nathaniel “Alex” Wright of Anchorage, AK failed to return home from a solo backcountry tour in Hyalite Canyon just south of Bozeman on Thursday night, his girlfriend felt that something was amiss. After dialing 9-1-1 around 10:45pm, a search and rescue team including a helicopter, skiers, and snowmobilers were deployed into the area. Unfortunately, their search ended when officials found Wright’s body just north of the History Rock trail at approximately 6:30am on Friday morning.

Search and Rescue personnel discovered that Wright had left his emergency kit in his car, which was found at the History Rock Trail parking lot. According to a press release from the Sheriff’s Office, Wright experienced a climbing skin failure that prevented him from making forward progress in the deep snow, which eventually leading to his passing.

Sheriff Brian Gootkin had this to say about the incident:

“Sometimes we let the closeness of the backcountry in Gallatin County lull us into a false sense of safety. You may be able to see town but you really are in the back country and if something goes wrong it can turn tragic. In this case it appears he had an equipment malfunction which led to a cascade of events ending in his death.”

*When traveling in the backcountry, always bring a partner.