The Drake Passage is where the Atlantic and Pacific Oceans meet. It’s an infamous body of water that can be as calm as a lake, or as it was on the return from Antarctica to Argentina on this expedition, full of shake. Nonetheless, this is but one layer of the stacked adventures featured on Ice Axe Expeditions Antarctic ski trips.

Hello skiers and riders! From the bottom of the world, to the return of winter in the Sierra, this is the first Unofficial Networks State of the Backcountry report for the 2015-2016 ski season!

Fall started quietly in California. September and October showed little precipitation in the form of snow, but thankfully November has dropped close to five feet of the white stuff at high elevations. While that’s nothing crazy for this part of the country, when thinking about the last few years it’s actually a great start. 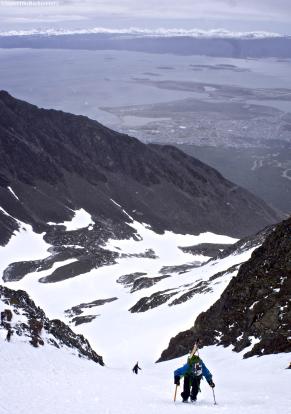 Skip Wilson and Jillian Raymond climb a couloir overlooking Ushuaia, The Darwin Range of Chile, and the Beagle Channel.

The local Tahoe backcountry is skiing quite well at present, considering today is the first of December, but before I get there, a small detour to the ends of the world kicked off the season for a few intrepid skiers and riders thanks to the ongoing work of Doug Stoup, Karyn Stanley and Ice Axe Expeditions. The first five shots that accompany this piece are from this trip, one that starts and ends in Ushuaia, the southernmost city in the world, and peaks with the unparalleled opportunity to ski Antarctica. 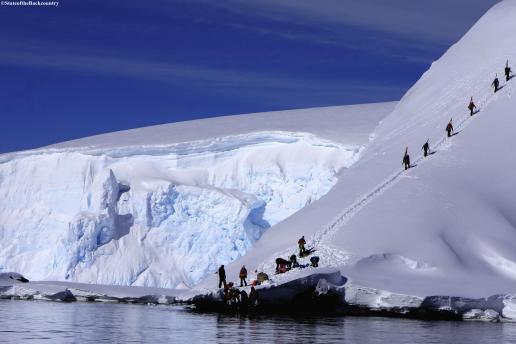 How about living on a huge boat while sailing to ski in Antarctica, and waking up daily to take zodiacs ashore to scout for landing zones like this one? Before you’re even touring or turning, this experience is like no other ski trip in the world.

Like all Ice Axe Expedition trips, this is the definition of “Trip of a Lifetime”! You travel to the literal end of the world, meet a bunch of amazing new friends, reconnect with old buds, and let loose on the fabulous ski terrain accessed from Ushuaia. It’s no secret that South America had a banger ski season this year, so it was pretty nice to close it out skiing a mix of winter, transitioning, and corn snow in this quaint Argentinian town.

The main event features a hundred or so skiers and adventurers, twenty or so guides, and a boat staff accentuated by the incredible Polar services provided by Quark Expeditions. The planning, effort and detail that goes into pulling off a trip like this is mind-blowing. As I guide, I was honored to work alongside some of the best of the best, and share such an incredible experience with great clients and an overall standout crew. 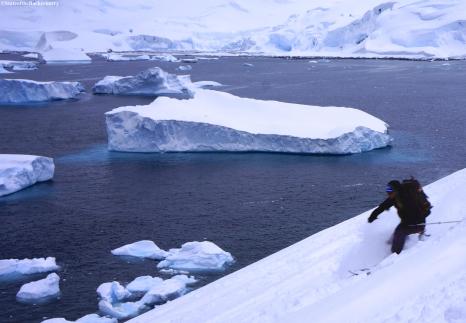 It may be one of the driest places on planet earth, but once and a great while there is plentiful powder. This years expedition was lucky to share in such an experience. Who would have thought, powder skiing in Antarctica!  Skier: Jillian Raymond

In terms of skiing, you’re not traveling to Antarctica to ski the best snow of your life. But hey, if it happens to dump while you’re there, when in Antarctica, right? The skiing on this expedition was surreal. Sure we had the typical firm surface skis on a few days, which is the norm and quite fun. But the powder, yes, the powder was surreal. Skiing in Antarctica is not typically framed by the conditions some of us experienced back in 2009. Sunny and blistering bluebird conditions had every member of that memorable trip in utter awe, although even those with very little knowledge pertaining to the White Continent knew the weather we enjoyed was an anomaly. 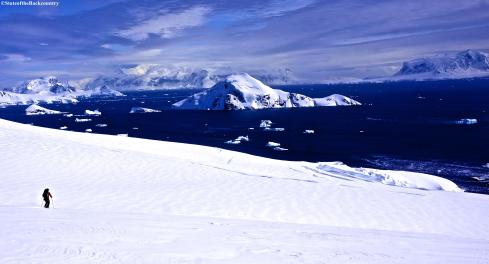 As much as the Ice Axe trip is a ski mission, it’s really not. Wait a minute, of course it is..but it’s a view like this when you’ll start to ask the same question yourself. Skier: Andrew Eisenstark

This year there was a little bit of everything, and truthfully that’s the way it should be. There was some Drake Lake and Drake Shake (sailing conditions on the infamous Drake Passage), loads of penguins, seals, whales, birds, five-star meals, five-star people, variable skiing, powder skiing, even a polar plunge and a wedding. Ice Axe makes the most far off ski trips in the world a possibility. No one has ever gone on one of these trips and complained about the price, service or experience. They are adventures that shape people and to be truly appreciated you have to experience one for yourself. Ice Axe is already taking reservations for 2016, and I’m looking forward to getting back to Greenland this April, and hopefully Kamchatka in May. Be in touch if you’re interested in any of these trips, and if you are don’t wait any longer. Life is too short to wait another year!

Back to good old Tahoe, which may be far from fat, but we’re skiing cold powder in the local backcountry and it feels great! If you haven’t already, as the season starts to fully kick in, it’s always good to refresh your avalanche education and skills, play with your gear, and get your mind back in the mode of how to safely and respectfully ski in the backcountry. As always, we are so lucky to have the fine folks over at the Sierra Avalanche Center (SAC) providing our community with educational services and observations on a daily basis. I urge you to get in the habit of checking their site daily to monitor and follow the ever changing conditions of our snowpack . Also, new for this ski season is the Tahoe Backcountry Alliance. Please give them a like on Facebook to stay up-to-date on all local backcountry happenings including the ongoing issue to work for access to the places we love to skin and ski in Tahoe. 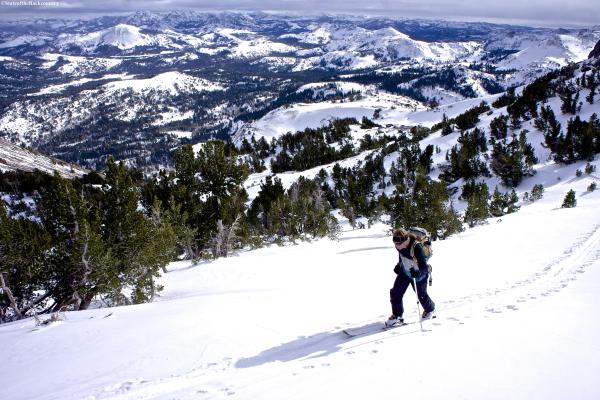 Touring Carson Pass and looking to the south. Not bad for November 30th.

Conditions wise, we’re doing pretty good considering the time of year and of course coming off of so many consecutive poor winters. As is the case normally with this time of year be aware of thin cover, and barely to partially buried obstacles. The skiing is quite good where the snow has settled and there’s a little base, but be aware that there have been some instabilities observed in the form of basal facets, and where recent strong winds have stripped and loaded/slabbed certain slopes. These concerns are variable in their spacing, but the latter mentioned wind effects were prominent while skiing recently in the Carson Pass area. That said, Carson Pass and the other high elevation access points around Tahoe are your best bet for fun ski touring in the now, but even at these spots, coverage is spotty and high caution is advised. The issue at hand is the snow has been mostly cold, and while that’s nice to ski, without a base, long term benefits are largely lost.

I’m hopeful for the big one to drop anytime now…and by that I mean many of us who have been around for a bit remember the days of going to bed with nothing, and waking up with feet of new snow-not just in the high country, but at Lake level. We’re on track for something to help us along the way on Thursday, but to really get Tahoe and the Sierra going we need at least a three-footer to come in and lay down a solid base. The lack of consistent snow to Lake level has hurt us the past few years, but all it takes is one really good old fashioned Sierra Storm Train and it’s game on! Hopefully that shapes up in the coming weeks through December as forecast models look positive enough in the now to let some low pressure take hold and transform our collective world for the better. 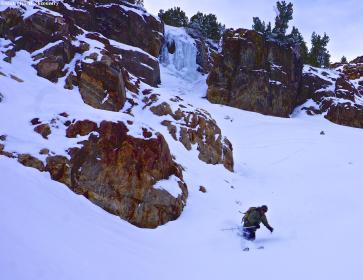 It’s still early season ski conditions pretty much everywhere in the Sierra, but in the right places, it feels as good as mid winter. Skier: Toby Schwindt

Here we are folks! It’s already December and another ski season is upon us! Take advantage of all the web-based and place-based avalanche awareness and educational opportunities that continue to become available as the season kicks into gear. I’m thrilled to be working with Unofficial Networks again to offer these reports and will continue to offer stoke and resources through other State of the Backcountry outlets as well. We’ve taken a few rough ones to the head the past few years in Tahoe and the Sierra, but whether the hype of Godzilla comes to fruition or not, there’s always somewhere fun to ski in the Sierra and we’re off to a solid start! Here’s to a safe, big, fun winter for all!