POWDER ALERT! FIRE HOSE IS UNLEASHING BIG TIME IN CALIFORNIA WITH THE ROCKIES AND EVEN THE PNW SCORING LEFTOVERS.

Rain/snow is changing to all snow for the Sierra Range very early Thursday morning with some decent totals expected above 7,000 feet. The areas I am watching include the Wasatch, interior Washington, northern Idaho, and perhaps northern Colorado. The midweek period brings in another round of snow for the Sierra pushing north into the interior PNW and eventually the Rockies by early to mid next week.

Warm air over the Sierra is being eroded by a weak cold front with snow falling at many resorts above 7,000 feet. The Palisades Telemetry shows 8-9 inches overnight (8K) as of 5 AM PST with temps falling into the upper 20’s at 8,000 feet. Further, towards the base at 6,000 feet, it is still above freezing with rain or snow likely all changing to snow by daybreak. Heavy snow will continue for the entire Sierra range with 10-14 inches by 3 PM Thursday as the cooler temps move over this area. A break is noted mid morning wtih snow beginning again mid or late PM Thursday. Winds should decrease through the day Thursday. Upper peaks above 9,000 feet are likely to have grabbed higher amounts. Bottom Line: Right side up snow (Warm to cold), density will be high, deep up top, much lower amounts at the bases. Consider riding resorts with higher base elevations including Mammoth in the Southern Sierra. Conditions getting deeper Thursday morning tapering by PM. Grab this storm since the next several will trend a bit warmer.

Sierra Moisture weakens as it moves from west to east over the Rockies Thursday night to Friday.

I am looking at a decent storm for Utah, especially the southern regions where 7-11 inches are possible for the mountains near Brian Head and Eagle Point Thursday/Friday. In the Wasatch range, SW winds that will perform well for the southern areas of Utah will funnel moisture north beginning Thursday evening. SW flow will likely favor BCC (Brighton especially) initially and areas of the northern Wasatch (Snowbasin) or even the I-80 corridor and the Park City side of the resorts. LCC will still be a solid performer with an increase in hourly snowfall rates very late Thursday night into Friday morning. How much? Models generally show 5-11 inches for most ranges of the Wasatch by Friday morning including Park City. Short-term High-Resolution Models show 11-17 inches for the Cottonwoods and a few outliers in the northern Wasatch (Snowbasin or Powder). Averaging out several model runs it’s likely that this storm provides 9-14 inches for the Ogden area mountains and similar amounts for the Cottonwoods. LCC could grab slightly higher amounts by the end of Friday, especially if the short-term high-resolution models pan out. Bottom Line: Decent storm for the southern and northern ranges in Utah. Lower elevations might see 5-9 inches closer to Park City with the upper flanks of the Cottonwoods or north into Snowbasin or Powder with 10-15 inches. Not a huge storm, but still worth a chase. Last-minute moves are possible Friday between the northern or central Wasatch (Snowbasin, Pow Mow, PCMR, or the Cottonwoods). The Tetons grab weak leftovers for Friday (2-4).

Below GFS is showing 12 inches for Alta on storm #1 Thursday night with another wave expected Tuesday to Wednesday. Amounts might overperform this model if you want to believe the short-term higher resolution runs which are often overdone, but in this case, I would not be surprised to see 12-16 inches by 2 PM Friday. The 2nd storm is too far out for confidence in these numbers (Moisture is decaying from the Sierra). 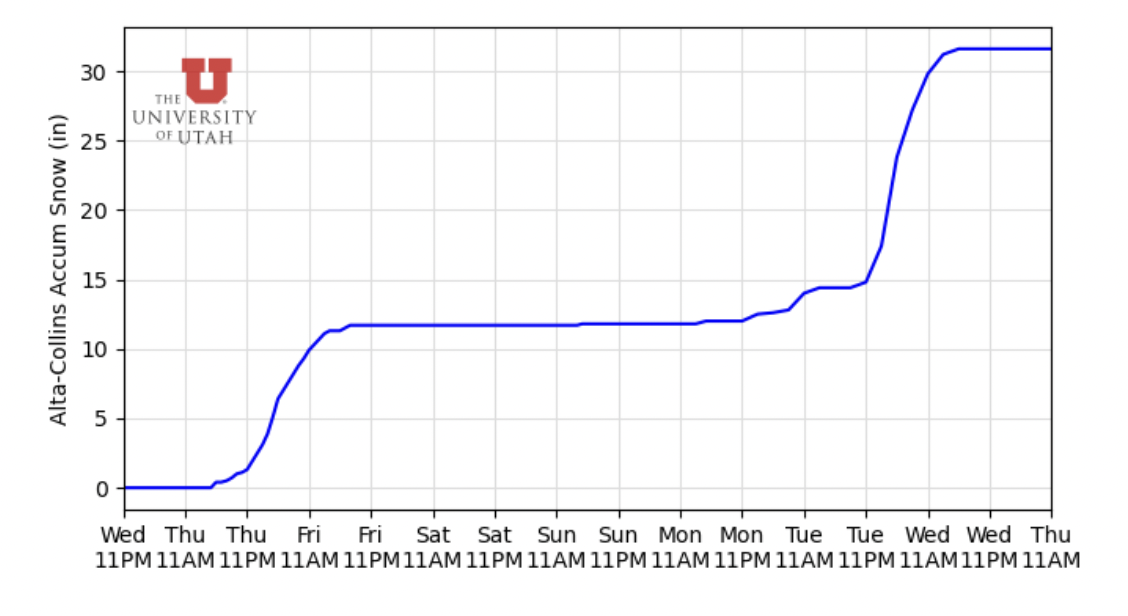 The Sierra moisture decays even further as it lands over Colorado very late Thursday night into Friday (Storm skiing). Moisture in Colorado will favor the central mountains (Crested Butte, Aspen-wildcard) and perhaps even Steamboat once again with SW flow shifting to the NW on Friday. The I-70 corridor will likely only see light or moderate snow. I am not confident of high snow totals with this storm. Snow showers continuing over Colorado Friday evening will land another round of light snow for the western I-70 corridor and areas north to Steamboat. Further east towards Summit County will see less snow.

Below: National blend of models is bullish for northern and southern Utah and areas of northern Colorado (Steamboat) extending south into Aspen and the central mountains (CB). I think this is a bit overdone on amounts especially for Colorado. 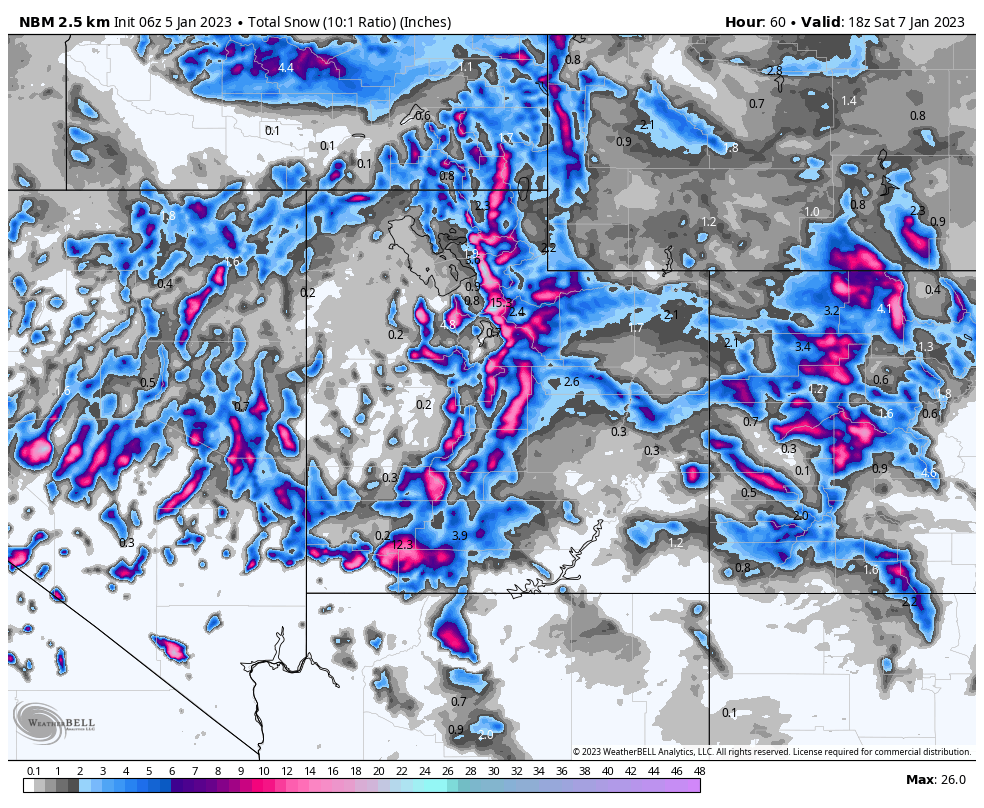 in the Pacific Northwest light snow showers filter north from the Sierra late this week increasing by Saturday/Sunday with the 2nd round of moisture over California. That system edges further north and with S or SE winds appears to land double-digit snowfall totals for the interior of Washington (Mission Ridge could score) and areas in northern Idaho (Selkirk Powder Guides, Schweitzer). Ride Sunday and Monday.

Below: The PNW gets into the game late this week, but especially by Sunday morning with some decent totals noted. 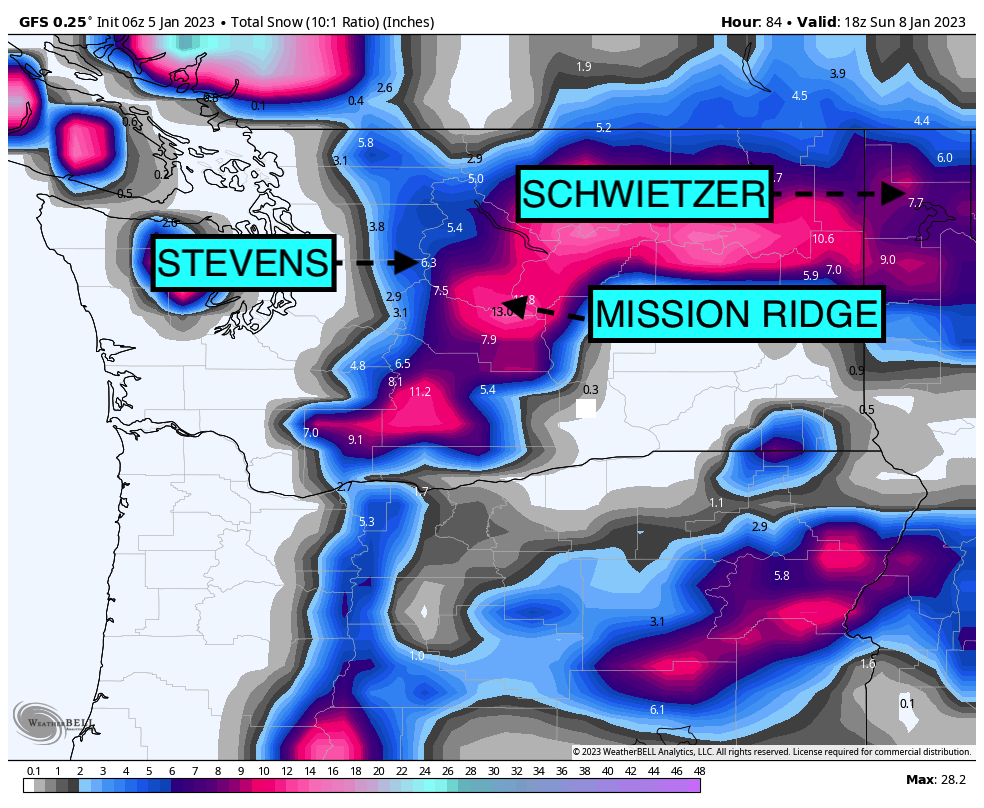 Another strong storm is due for the Sierra from Saturday evening to Sunday. This system starts out a bit colder but finishes a bit warmer than the ongoing storm currently. Expect 12-15 inches at mid or upper elevations with much less at the bases for Sunday as temps flip from cold-warm-cool. Density will be on the heavy side.

Below: Storm 2 has some decent totals above 8,000 feet for Sunday morning but may be a bit warmer than the current system. 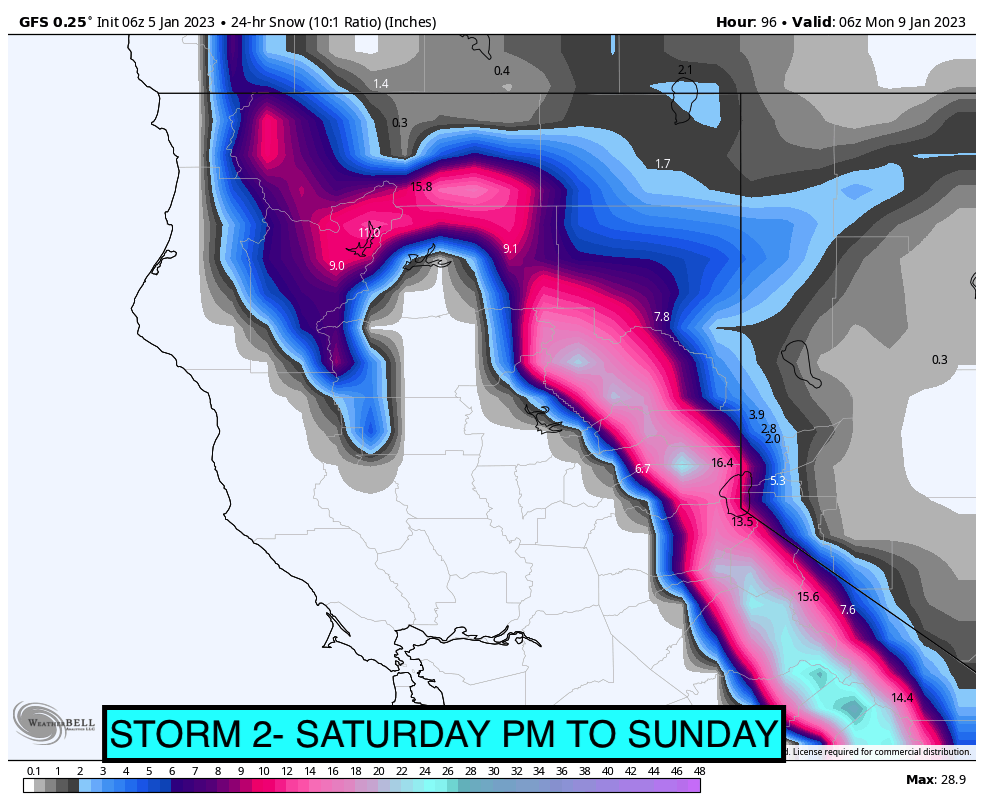 California is going to get deluged with significant moisture (Flooding, high hazard risks) that continues and peaks Monday to Tuesday. Temps will be too warm for the ski areas and my guess is that full closures will take place at some point early next week.

Below: Total moisture from today (Thursday) through Wednesday for California is of magnitude proportions. Temps warm early next week adding further to issues. 16 inches of moisture were noted north of I-80 in the 6-day period! These numbers will adjust as we get closer. Not sure I have ever seen these purple colors in a 6 day period. Don’t try to chase the Sierra early next week! Or if you do complete your wardrobe with full-on waterproof layers and multiple goggles and squeegees and a towel to sit on when driving home. 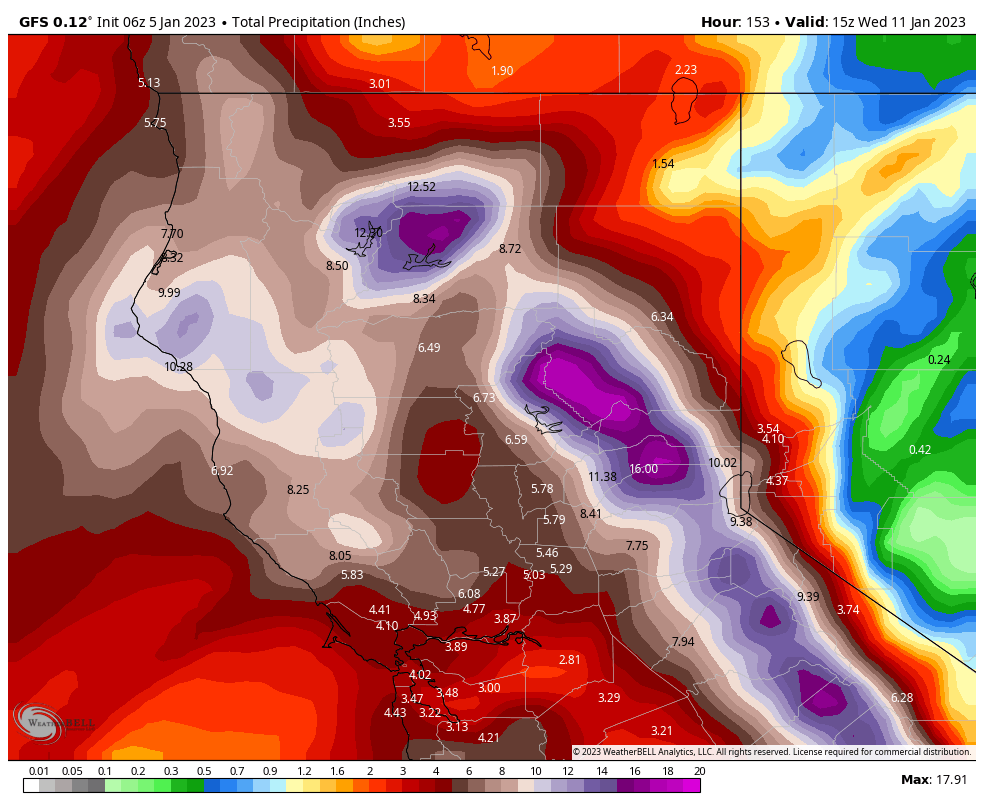 Moisture from the Sierra early next week will push north and east by Tuesday/Wednesday next week. The models show an uptick in perhaps up to an inch of moisture taking a more northerly path than the current system. This might bring moderate or low-end heavy snowfall back to central or southern Idaho, the Tetons, and Wasatch, with some leftovers for Colorado midweek. More on that in a future post. Bottom Line: CA gets slammed with heavy rain/snow early next week. Snow returns to the Rockies by Tuesday next week extending into Wednesday. We are watching Idaho, Wyoming, Utah and perhaps Colorado.

Below: Storm #2 entering CA and the PNW by Saturday PM (northerly track bringing snow to the Cascades especially interior areas with S or SE flow). 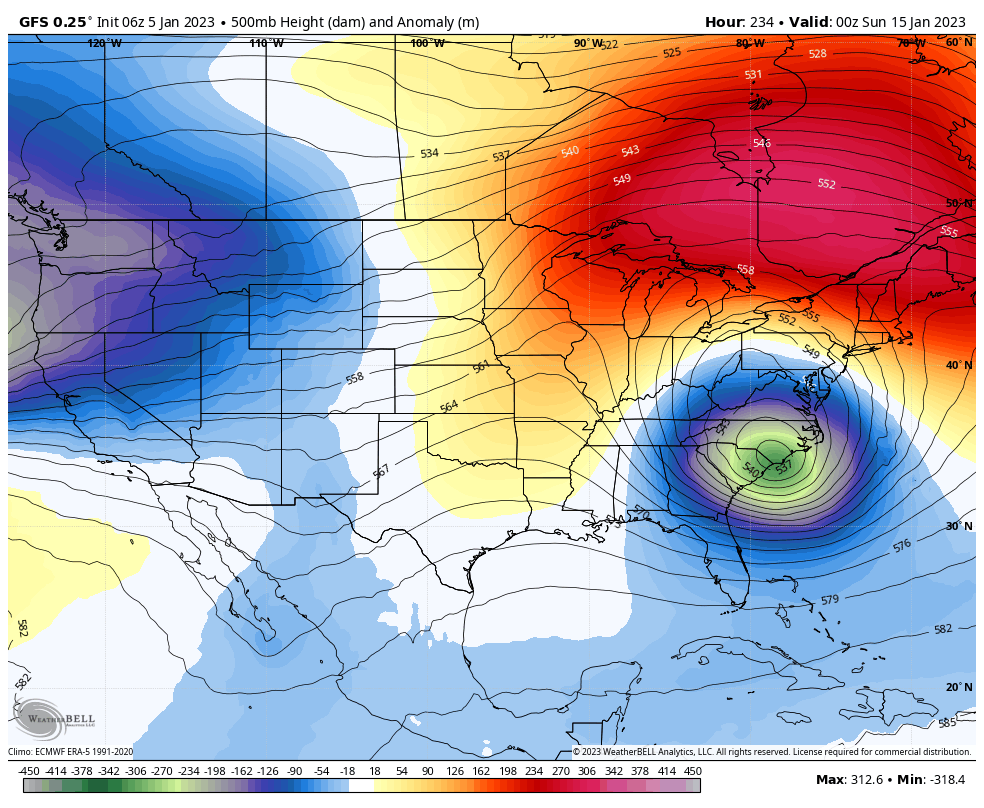 Below: Storm #3 with powerful AR slams into California by Monday night and Tuesday (Warming). 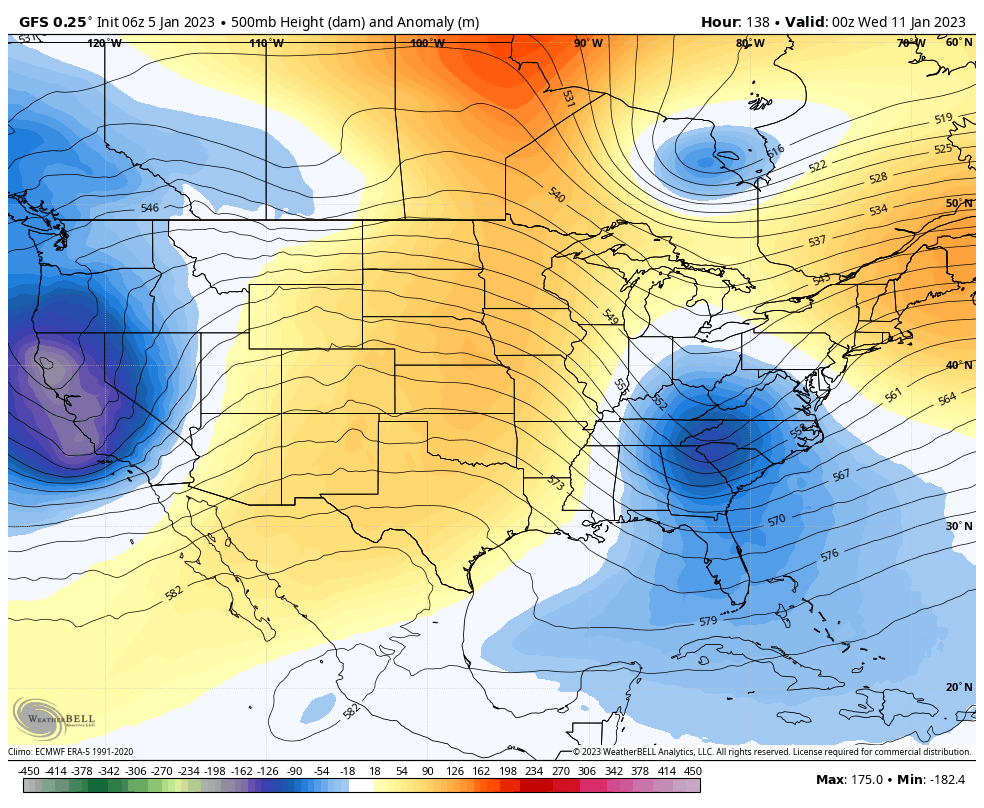 Below: Midweek moderate snow is likely for the Rockies as moisture decays. Deterministic models show that this might be a better storm for Idaho and Wyoming. More on this in a future post. 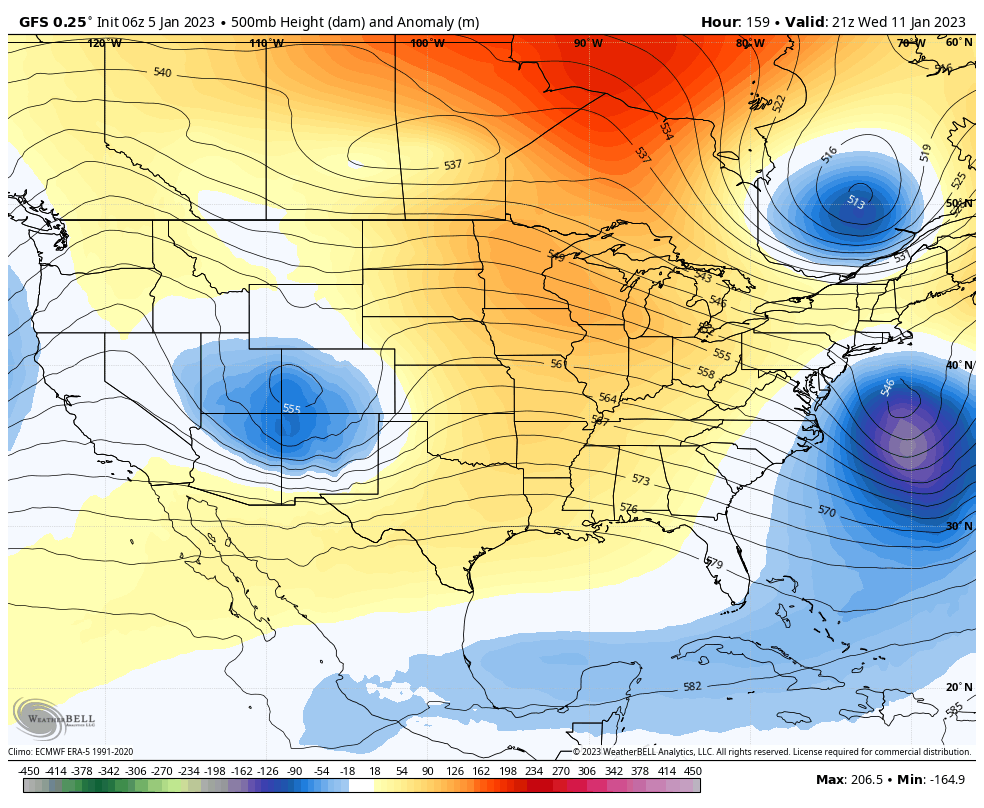 Finally, looking out toward the end of next week January 14th, moisture is likely to pick up again in the Sierra by the weekend. The overall pattern looks to be very wet and colder for the January 15th-22nd period. We might get into a more zonal flow of storms moving inland with cooler temps as opposed to the stubborn systems offshore currently in California. This would be an optimistic pattern. Look for continued chances of decent snowfall for the west!

See you on first chair Friday!