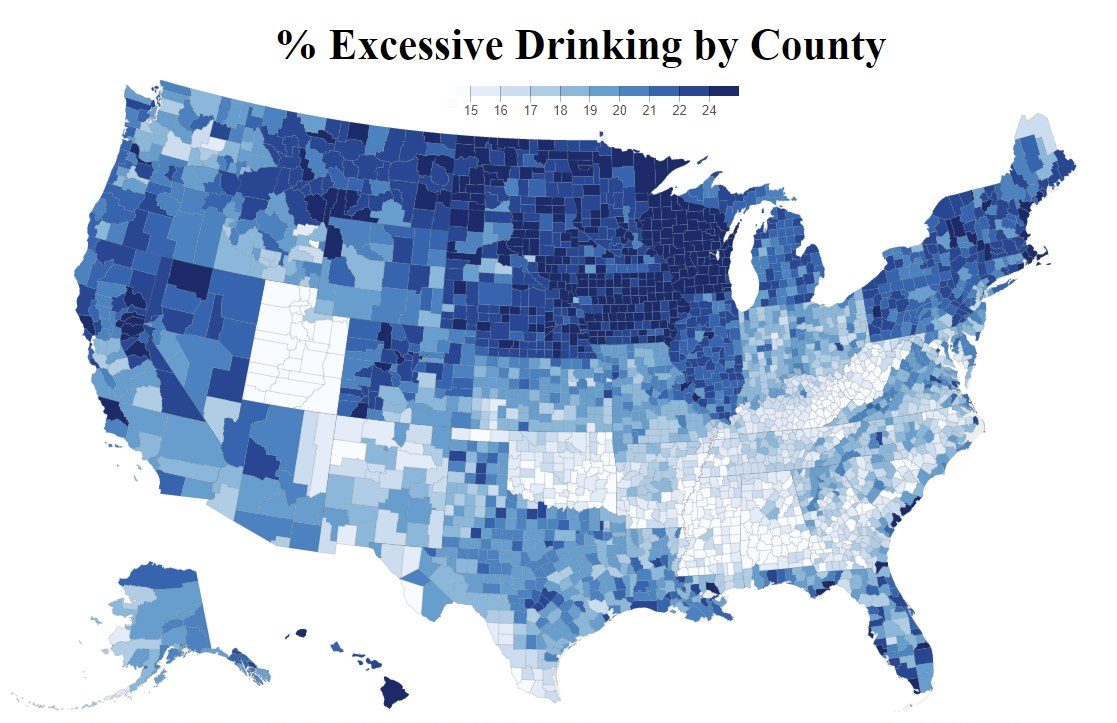 The map above documents the percentage of people in each county who excessively drink alcohol. To summarize, the darker the shade of blue, the more people who who drink excessively.

The report uses data collected from the CDC. They define ‘excessive drinking’ for men as consuming five or more drinks in a sitting, and four or more for women.

The map has been shared across various news outlets, but I haven’t seen anybody break it down from the perspective of a skier such as myself.

You all know I’m a big f’in deal ski blogger who lives in his parent’s home at 26-years-old. Who better to speak on this issue, right?

Let’s start with the great state of Utah. The entire state is shaded white, meaning that less than 15% of residents in those counties drink excessively, besides one county in the Northeastern corner of the state. Can you guess which county that is…? Summit County, baby. Home to Park City, UT.

Summit County is still a very light shade of blue, but I found it hilarious that it’s the only county in the entire state unlike the others.

In fact, I remember sitting out on the patio at The Corner Store at PCMR a few years ago enjoying a few beers and listening to live music. Some people were drinking, heavily, and the musician playing his guitar said at one point, “Just remember folks, when you’re drinking here you’re drinking in Park City, not Utah.”

That’s not to say that Park City is the only town you can booze at in Utah, but it’s certainly an outlier when compared to the rest of the Mormon-dominated state.

Another notable outlier is Keweenaw County, home to Mount Bohemia, in Michigan’s Upper Peninsula. Most of the counties in Michigan are varying shades of blue, but it looks to me like the Keweenaw is the darkest.

Now, I’m not saying that enough alcohol is consumed at Mount Bohemia throughout the winter to juice the stats, but uhh… yeah maybe I actually am saying that… 😂

The Unofficial Networks crew was there for a week back in January of 2020, and I think we would all agree that we saw an absolutely absurd amount of alcohol consumed during our stay.

Those Bohemians love to have a good time after skiing powder all day, and can you blame them? Powder + Yurts+ Hot Tub Parties = Excessive Alcohol Consumption. It’s a simple equation. There’s clearly a correlation between ski areas and counties with excessive drinking. I could sit here and break down every single one, but can I just address the elephant in the room. Yeah, how about we talk about THE ENTIRE STATE OF WISCONSIN?!?!?!?

I lived in Wisconsin for 4 years, and I can vouch for the data shown in this map. Those cheeseheads drink, and I mean DRINK.

Wisconsin is home to 31 ski areas, but I don’t think it’s the plethora of skiing options that leads to heavy drinking. Beer is embedded in their culture, and beer they drink. Excessively…

With that being said, you can have a damn good time at any of Wisco’s 31 ski areas if you like adult beverages. Drinking is as apart of the ski culture there as the skiing itself. I mean, what else are you supposed to do after skiing the same 200-foot slope 35 times in a row?

Drinking is part of ski culture, but I’d like to remind you my sweet friends- don’t be irresponsible out there. I can’t stop you from slamming pocket beers  on the chairlifts and taking Fireball shots in the lift line, but I can scold you like you a 75-year-old Grandma if you act like an idiot.

Have a good time out there, but be safe. Remember that you could hurt others around you if you’re skiing or riding out of control.

Okay. That’s enough of being responsible. Sorry for that. Have fun and stay safe out there, friends!