An upcoming storm system will provide really good snow totals for the PNW, and western BC. Several feet of snow will blast these areas between Sunday and Thursday.

Happy New Year everyone! The past several days have provided the best powder skiing of the 21/22 season. 2  feet of fresh fell at most Utah resorts from Thursday to Saturday. Alta is reporting 32 inches (Storm total). Park City is approaching 2 feet.

We chased powder from the Sierra riding Palisades, Sugarbowl, and Northstar (50-100 inches) to the Wasatch where I scored 15 inches at Snowbasin and 22 inches at Powder Mountain (Same day) on Thursday. On Friday we hit Snowbird with 23 inches. Our weekly total is approaching 150 inches. The colder temps over the Rockies have provided the best quality powder we have seen this season. Saturday (New Year’s) will provide new openings and an opportunity to get into the deep once again. Quality is top-notch right now in the Rockies.

Announcement: If you want to support these forecasts or chase powder with us, Join the Concierge program where you get direct communication with our forecasters. We will always keep you in the deep! Or simply donate to support our grass routes crew that provides the forecasts. Also, if you are interested in Heli-Skiing in Alaska this season we have partnered with Alaska Backcountry Guides who we can assure you deepness. Anyone booking with Alaska Backcountry Guides this season will receive a free Powderchasers Concierge package good for 2 years. They only have a few weeks left in March so check them out to insure a seat.

Elsewhere in the west, Colorado grabbed double-digit storm totals in the central and southern mountains as we forecasted. Crested Butte logged 24 inches in 48 hours with a base depth of 85 inches. Elsewhere, along I-70 amounts were less. This storm came in with SW winds and a very moist atmosphere and as the winds veered NW over I-70 most of the moisture was east or south of the region. We did not expect huge totals in these areas. In New Mexico, Taos is currently scoring some powder (Double digits over 48 hours) with another 3-6 inches likely on Saturday.

Below: Taos Ski Valley webcam as of Saturday morning. Conditions could be great for New Year’s. 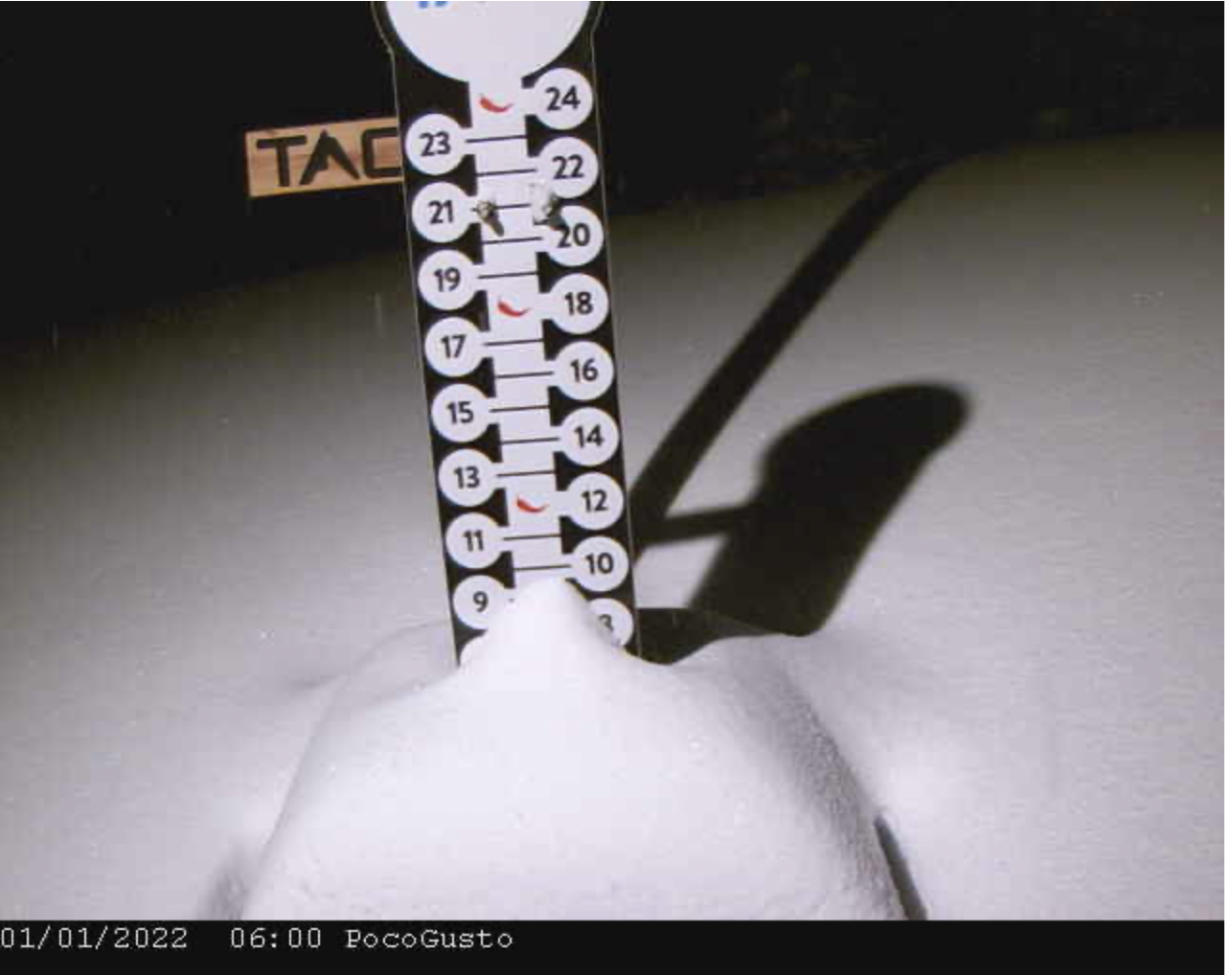 Below: Snow water equivalent (if you melted the current snowpack) has jumped above average in many areas of the west as we closed out 2021. California (Not shown) is considerably above average.

The next 3-4 days will feature a good storm for the Pacific Northwest and western BC. Significant snow will be falling from late Sunday to Monday with up to 3 feet in many areas by late Monday night or Tuesday morning. Another wave of snowfall will arrive Tuesday night to Wednesday with lighter amounts. The interior resorts of the Cascades will also capture decent snow totals including Northern Idaho. Western BC will grab deep freshies on Sunday/Monday with moderate snow falling in the interior (Revelstoke).

Bottom Line: You can’t go wrong chasing in the PNW in the next 48 hours. Winds will be strong prior to the front and could remain a bit gusty during the event (Snow quality risks and lift opening delays are possible).

Below: Total snowfall for the PNW through late Monday night. The southern regions of the Cascades including Oregon may see the highest totals. You can see BC at the upper end of this map with several feet expected for Whistler Sunday to Monday. 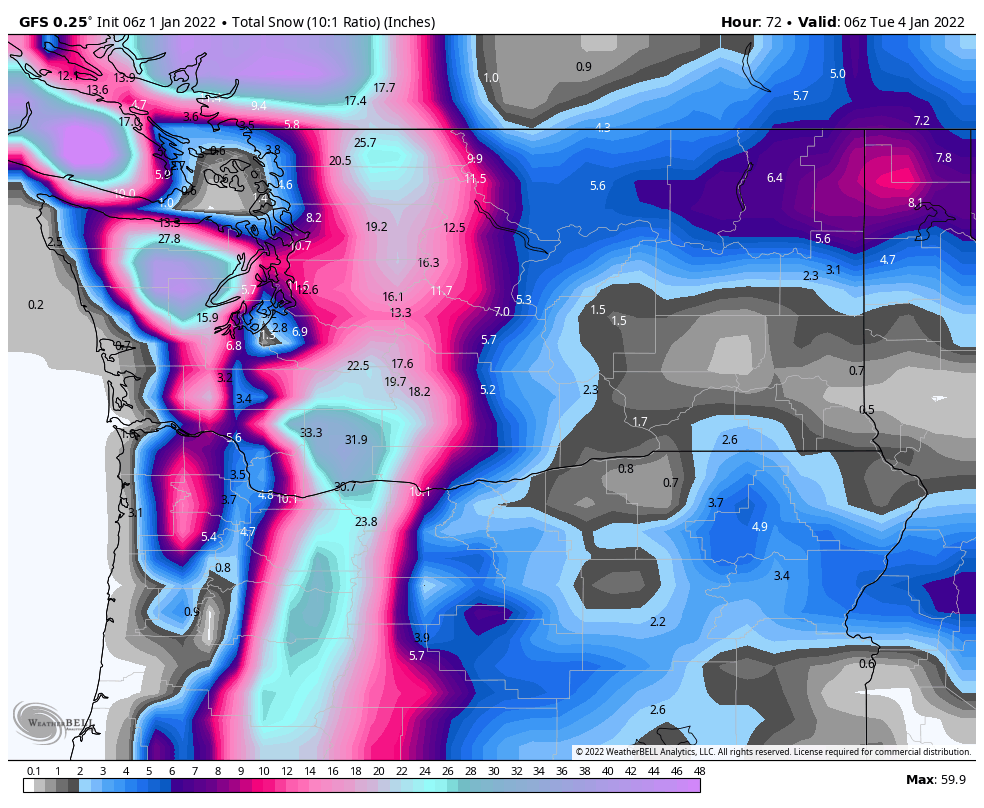 Looking out at the extended forecast, the moisture from the PNW early next week will drag over the Northern Rockies by Tuesday or Wednesday. Moderate snow is likely from Northern Montana, central Idaho, Tetons, Wasatch, and a good portion of the north-central Colorado mountains by midweek. It might end up as a 2-day steady light-moderate event versus any single double-digit dump.

Another storm moves into the PNW by Thursday with warmer temps and another good round of snowfall.l

Below: FRIGID temps are likely for interior Canada next week that drop into Montana  These temps are at 4800 feet. This may also impact western BC with warmer temps as you approach the coast. If you are Heli skiing next week be aware of these extremely cold temps. 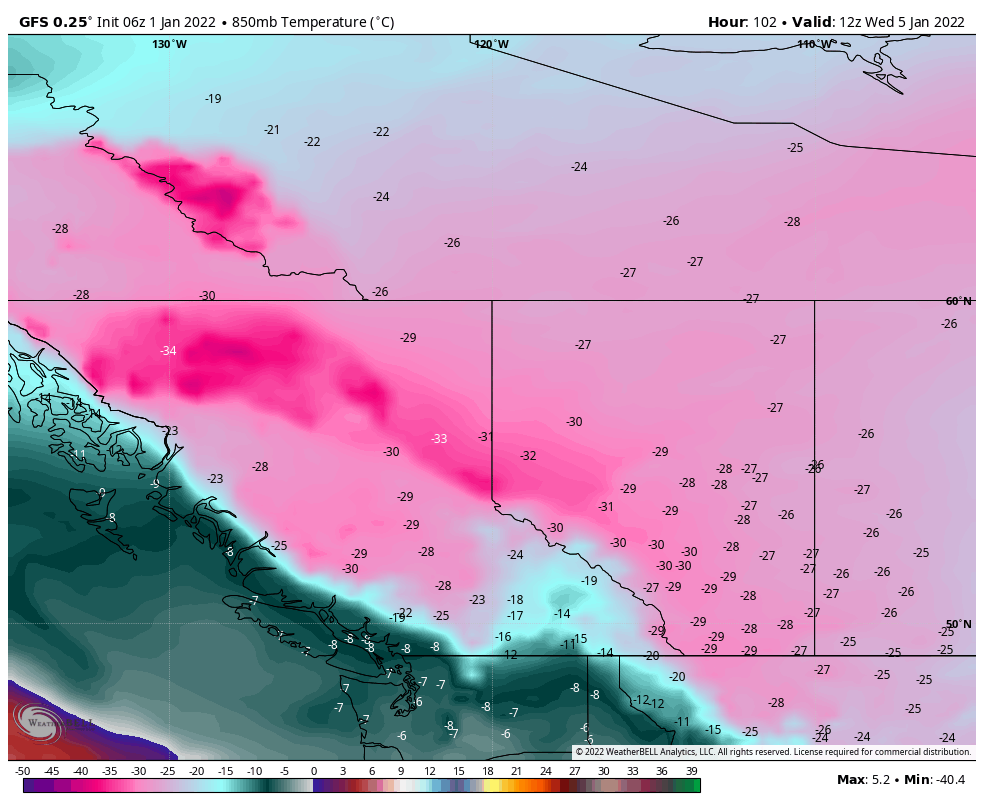 Below: Midweek storm for the Rockies Wednesday-Thursday could bring modest snow accumulations to the Northern Rockies including WY, UT, CO, and Idaho. This storm is likely to favor northern areas of the west.

Enjoy the powder everyone and Happy New Year! We ended 2021 with a bang in many locations.