A very complex closed low will form over northern Utah next week stalling somewhere between Nevada, Utah, and southern Wyoming. Steady precipitation will bring some significant snow totals to only the highest elevations that might favor the Front Range of Colorado and perhaps northern Utah, southern Montana, and SE Wyoming.

The previous storm in the PNW delivered as forecasted, blower pow, and ranges from 6-13 inches for the central and northern Cascades. Stevens Pass recorded the highest amounts followed by Mt. Baker. This was your last chance to score blower for the season in my opinion. Next week will bring a prolonged period of moisture that should favor northern Utah, Southern Montana, and a good portion of SE Wyoming and the Front Range of Colorado.  The highest amounts will likely come above 9500 feet especially outside of Boulder near Rocky Mountain National Park, Eldora (closes April 11th), Winter Park (Wildcard sitting on the western side of the Divide), Loveland, Breckenridge and A-Basin. Other sneak up spots next week could include Beaver Mountain (Northern Utah- Closed), and perhaps Red Lodge Mountain in Montana however amounts won’t be as deep as Colorado by the end of next week. Some Ski Areas, especially in Colorado might log 12-20 inches next week at the summits with much less at the bases.

It’s a bit early to get into details with this storm, just now evolving and models disagreeing on amounts. The American GFS has been by far very bullish with this storm while the European showing less. The GFS has been more accurate this season in my opinion (Did a good job in forecasting the monster dump in Colorado last March) while the Euro less so. Decent moisture is with high confidence next week.

Bottom Line: Deep snow will evolve over the highest peaks of certain areas of the Rockies next week. This will be a Freight Train, moving slow, and producing light to moderate long-duration accumulations verus any single deep event. There will also be several breaks between waves of moisture. Temps will be cold enough in many areas at night for snowfall at even lower elevations however daytime warming will limit quality and amounts at the bases and even mid-mountain. There is a push of moisture initially Tuesday-Wednesday that seems to favor the Front Range of Colorado. Snow will also be falling albeit lighter over northern Utah (Wednesday) that might bring some moderate amounts to the Logan area mountains (Beaver Mountain-closed). Snow could continue in northern Utah into Thursday however currently, amounts seem moderate. The Cottonwoods might also earn some turns with moderate snowfall (Further north or East over the Uinta Range might be deeper).

Steadier precipitation, favoring the Front Range of Colorado should occur late next week. Significant amounts are possible over the Front Range Mountains above 7,000 feet. Some snow is also possible at the lower elevations, especially the higher hills around Boulder and Fort Collins. Temps will be cooler on the east side of the Divide for this storm. Temps will be warm initially on the west side of the divide (Snow levels 9500) but lower significantly along and west of the Continental Divide by Friday or Saturday as moisture weans. Some light and better quality snow may occur Friday/Saturday as the closed low finally begins to move east (Lighter snow). Moderate snow is also possible towards Vail Pass and even Aspen who show nearly an inch of water next week (5-10 inches of snow).

Below: Total Moisture for Colorado through early Saturday. The Front Range is favored with up to 2 inches of liquid in some spots. The highest snow totals likely will land in Rocky Mountain National Park, Foothills above Boulder, I-70 on the east side of the Eisenhower Tunnel, Loveland Pass, A-Basin, Breckenridge, and perhaps Winter Park (Berthoud might be deeper) with winds SE, switching to the N, NE late. NW winds on the west side of the Divide might bring moderate amounts to Vail Pass and even Aspen next week (Wildcards). 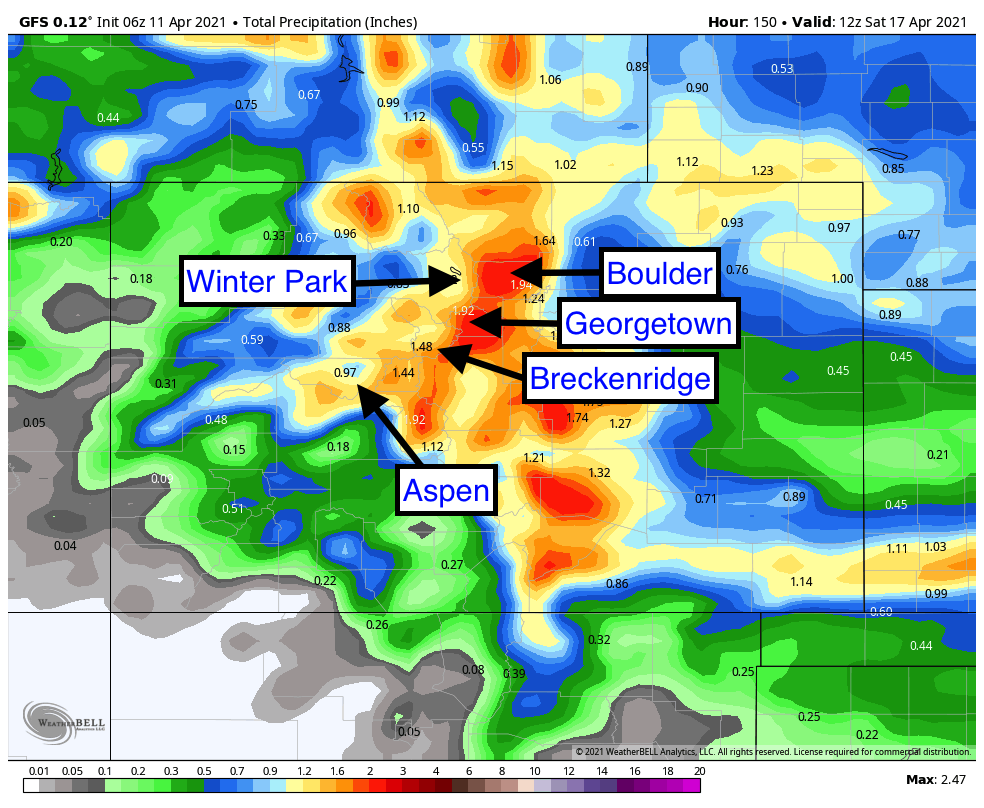 Below: The University of Utah Plumes averaging multiple ensemble runs verifying the slow progression of snow totals beginning on Tuesday for Berthoud Pass.  Amounts are pretty impressive here, however, this particular model trends higher in many cases. The take-home message is lots of moisture and the potential for significant snowfall at upper elevations over a 4 day period (Tuesday to Friday). Some colder higher quality light snow is likely for Saturday. 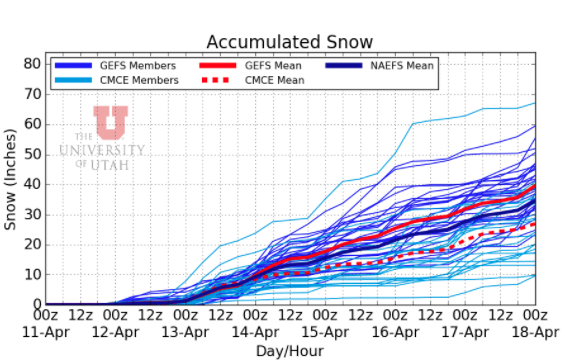 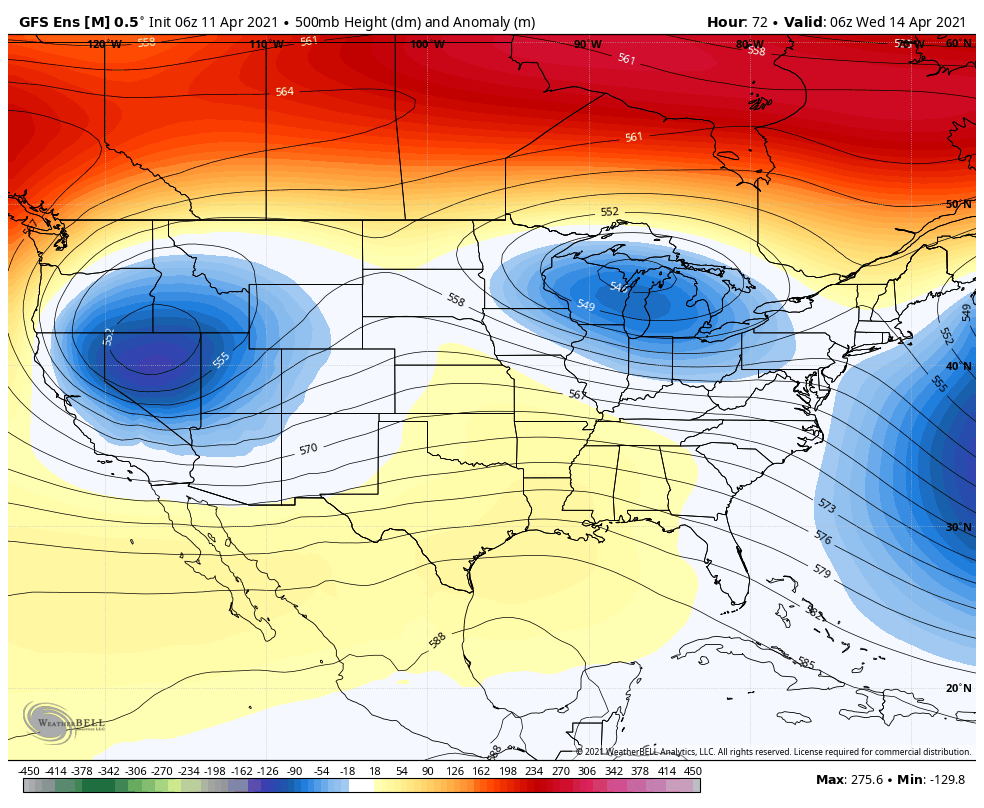 Below: Elongated closed low stretching out over Colorado by Thursday when the highest precipitation rates will likely fall (Thursday/Friday). The center of the low has moved very little during the previous 2 days. 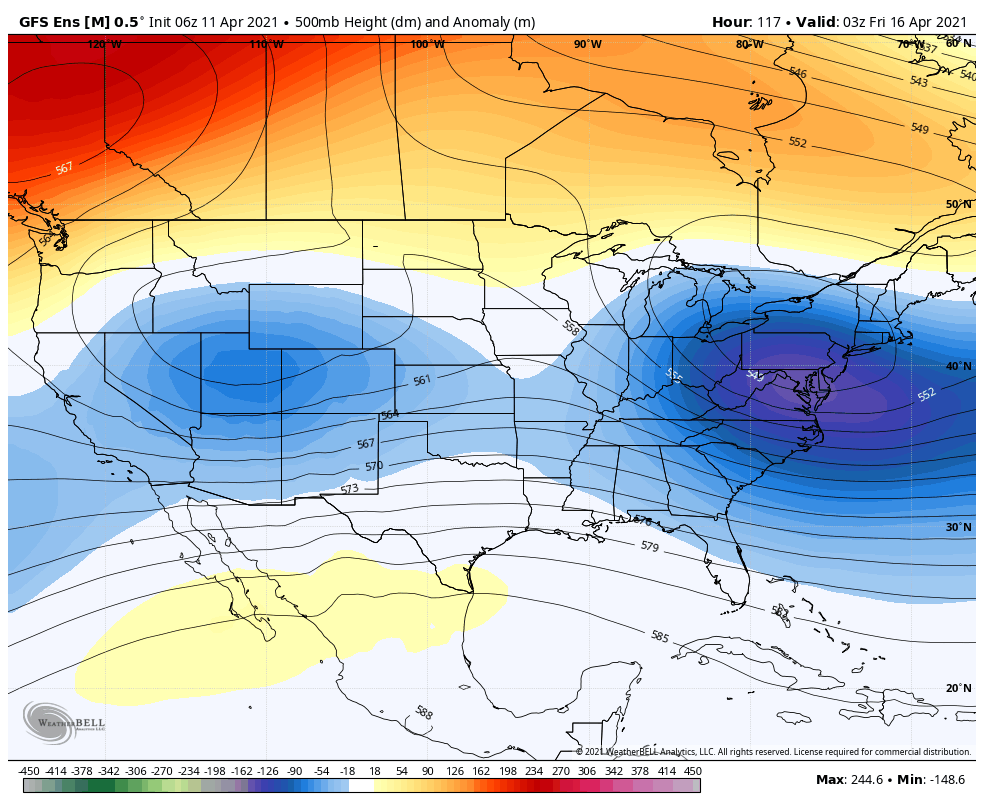 Below:  By Saturday the low has pushed east of Colorado with some moisture still likely falling on the backside, and cooler temperatures. 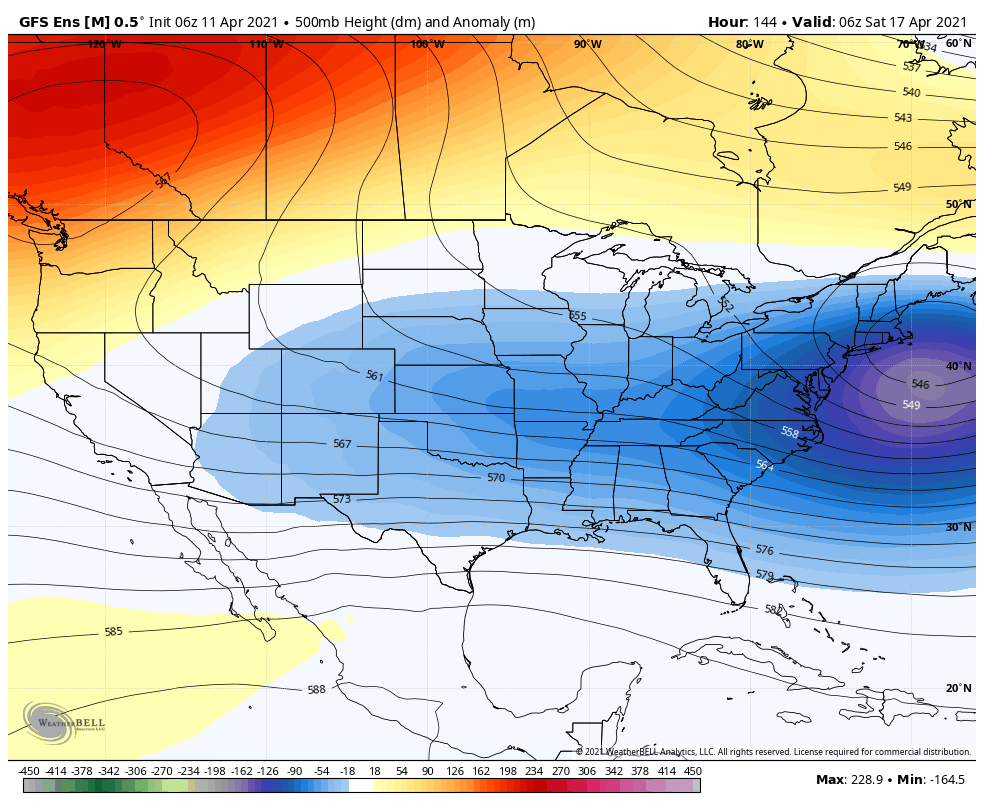 This could be an exciting week of deep buttery powder in some areas! Models can change this far out, with the Euro still more pessimistic this forecast will be updated as this storm develops. Please be sure to follow our daily forecasts on Powderchasers.com.  It might not be time to put your boards away just yet. Keep your snow tires on, however, most lower elevations should remain clear of any significant snowfall. Please donate to support our forecasts. Don’t forget to follow @powderchasers on Instagram and Facebook.