Powder Alert For California and Colorado

Powder Alert For California and Colorado

A decent storm is on tap for California in the next 24-36 hours. Northern CA might see 2 feet plus with the Tahoe Basin in the 12-18 inch range. The long-term models are providing a hint of a major storm for the Front Range near Denver late week.

Below: @Powderchasersteve via Instagram.  Took full advantage of the warm temps last weekend sampling the goods in Moab on Sunday morning (Amasa Back trail). Its time to get back into Powder mode.

For chasing powder this week, confidence is high for a significant winter storm impacting the northern tip of California Monday night into Tuesday. This will drop south into the Tahoe Basin providing light snow Monday night and Tuesday with heavier snow into Wednesday morning. You could ride northern CA Tuesday and drop south into Wednesday.  Most Ski Areas in California from the Oregon Border through to Mammoth in the southern Sierra will see decent snowfall from this event (18-25 inches towards the northern border, and 12-18 in the Tahoe Basin including Mammoth).

Below: Total snowfall for the Sierra through Wednesday morning. Isolated pockets up north of 2 feet with generally 12-18 for most of the Sierra Crest. 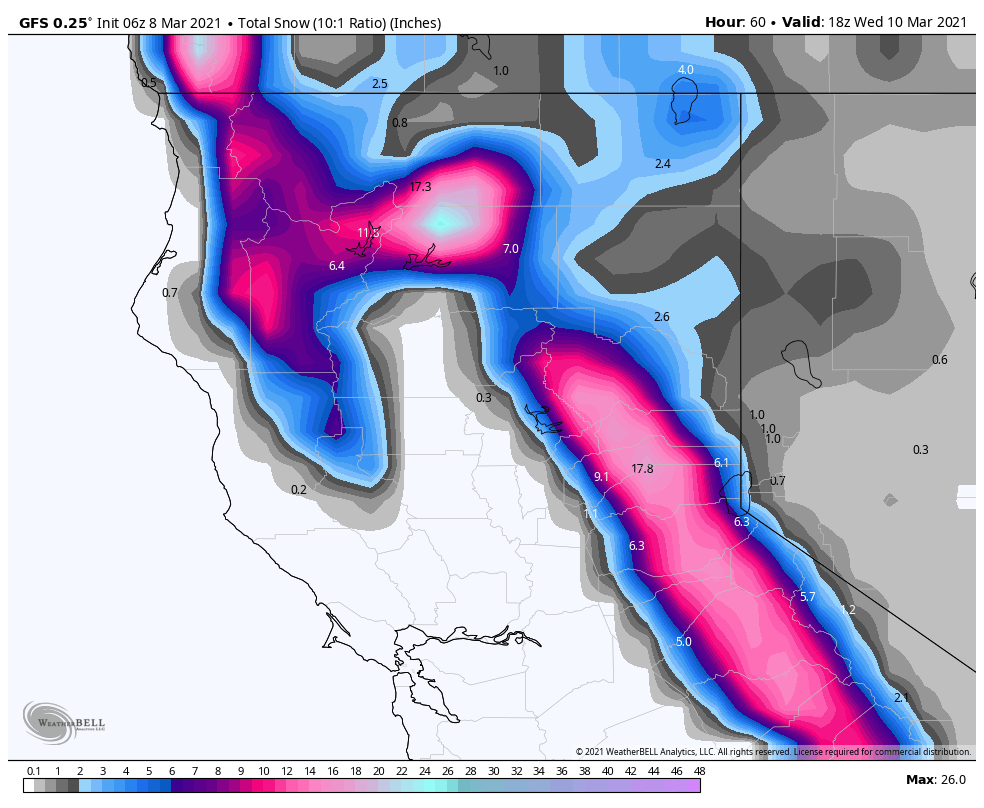 Elsewhere in the west, light snow will be found in the Oregon Cascades in the near term, with central Idaho near McCall perhaps seeing 3-6 inches for Tuesday morning. The Tetons are grabbing decaying leftovers as the main energy from this storm drops into southern California before swinging back up into Colorado late this week. Jackson or perhaps Targhee might record 2-5 inches at some point by Tuesday late AM. The Wasatch grabs these leftovers late Tuesday into Wednesday (Light Snow). Snow might continue in the Wasatch albeit light through Thursday so totals for the week could approach 5-10 inches with higher amounts in the southern 1/3 of Utah.

The big news is In the extended forecast! The Front Range of Colorado might grab 3-4 feet through the weekend which should also bring decent numbers to many Ski Areas.

In an extended outlook, this far-out models can completely reverse course, downgrade, or upgrade being 5-6 days out. However, consistency has been good for the past several days that the Denver Metro areas are going to grab the biggest storm of the season, by far, and steady snow might be falling from Friday to Sunday.

Currently, the models advertise the California Low this week dropping south before slowly moving east through the 4 corners. Moisture will push north of the low into the San Juan Range Thursday night under SW flow. Telluride, Red Mountain Pass, Purgatory, and Silverton seem to be favored for the location of the highest moisture Thursday/Friday (Early to forecast amounts, perhaps 6-11). Further east or north winds are going to be from a SE direction pushing snow into the northern Front Range (Fort Collins) area Thursday night into Friday. Winds veer more easterly before going NE by Saturday over the Front Range (Many wind shifts posing challenges in pinpointing the highest totals for the Front Range).

Below: Low pressure setting up over the Front Range by Friday-Saturday with NE winds.

While it is too early to pinpoint snowfall totals, it is likely that the Front Range Foothills grab 1-4 feet (Wide range due being 5-6 days out) and the metro areas not far behind. For the Ski Areas, models are very bullish for the Continental Divide and east including Berthoud Pass, Winter Park, Eldora with appreciable amounts for areas on the western side of the Divide. It’s likely Summit County including A-Basin, Breckenridge scores decent amounts, while areas further west towards Vail stay in the 5-10 inch range. Models are also bullish for the Aspen area mountains and areas west towards Grand Junction that might report decent numbers late this week and early weekend. NOTE: Temps are not overly cold, so quality in the mountains will be a bit dense with cooler temps on the East side of the Divide. Power Outages, down trees in the metro areas, are a real possibility with this storm in the Front Range.

Below: The University of Utah Plumes are showing 20-40 inches for Berthoud Pass through Saturday. Some of the ensemble runs show less with a few showing more. These Plumes, especially this far out tend to be overdone, but the take-home message is that 1-3 feet of snow are likely late this week or weekend east of the Divide. 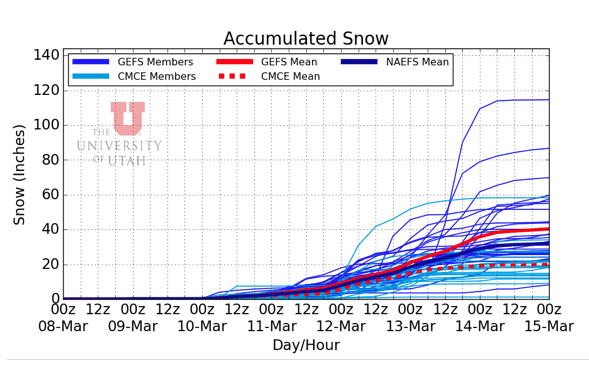 Southern Lows are complex, with many wind shifts, timing challenges (Slow to move), and sometimes land surprise snow totals outside the forecast models. This storm is likely to provide significant impacts to the entire I-25 corridor and front Range Foothills. While Red Feather Lakes or Nederland could be measuring 2-4 feet of snow, the Ski Areas west will still benefit from this storm. The higher totals might land in southern Summit, north of I-70 near Granby, or even further west towards Aspen or Telluride. Monarch and most of central Colorado could also see some deep surprises.

Below: Total snowfall per the American Model (GFS) through Saturday for Colorado. The 40-inch numbers are in Boulder County while further west shows less. An appreciable amount still showing up for central Colorado (Perhaps Monarch-Wildcard), and areas west towards Telluride, and even Aspen and most of Gunnison County. Its too early at this point to speculate on amounts. The Front Range Foothills, Rocky Mountain National Park, and areas south on the eastern side of the Divide will see the highest totals. 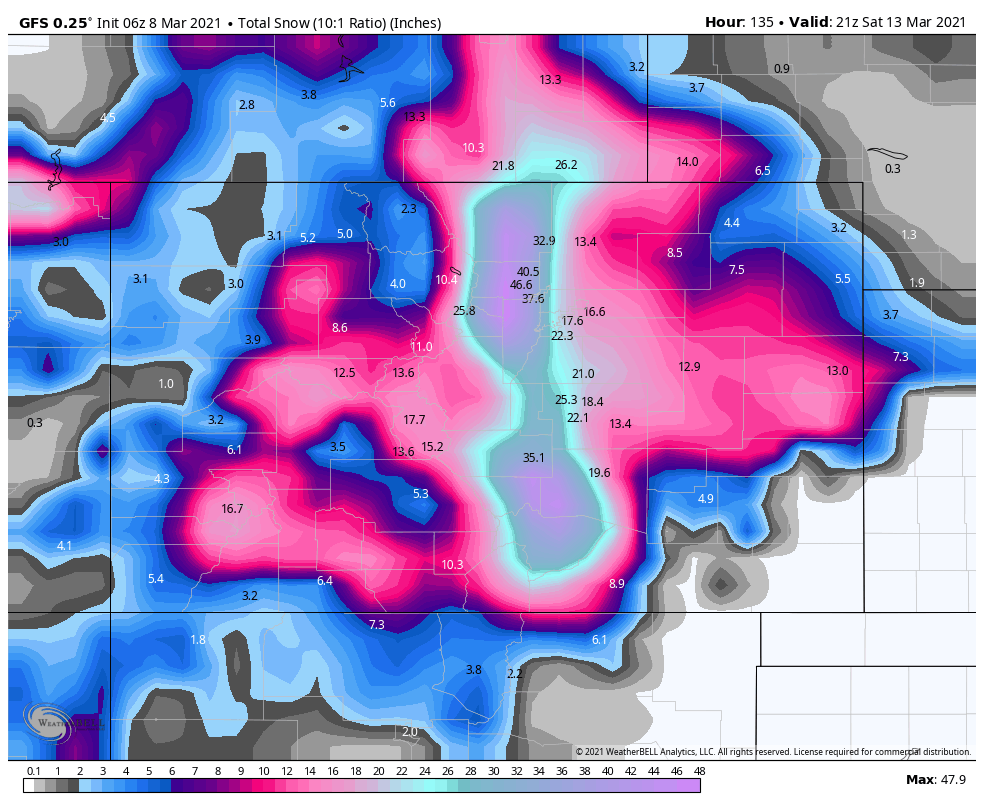 Disclosure: We are still 5-6 days out, we can’t put high confidence in this forecast just yet.

Enjoy the anticipation! Enjoy the powder everyone early this week out west.