A low-pressure system will parade quickly through Oregon and California before stalling over Northern Utah on Saturday. The Wasatch will finally get a dump, with even higher amounts possible for the 4 corners. Please support Powderchasers with a donation or join our concierge for custom chase forecasts. This post is sponsored by Beaver Mountain in Logan Utah where you can still buy a ticket for $50 bucks and ski powder on Saturday/Sunday.

Below: My last day in Hawaii and now back to chasing powder! Follow Powderchaser Steve @powderchasersteve and Luke @lstone84 on Instagram for our travel adventures.

For once, I can discuss a storm that is going to provide a quick blast of snow to the PNW and then materialize over the Rockies this weekend providing deeper snow. The previous patterns have all put deep moisture in the PNW dragging leftovers often missing the core of many Ski Areas. While this system is looking decent for Utah, there remains some speculation on where the heaviest totals will occur. I have high confidence that by Saturday afternoon many Ski Resorts in northern Utah will see totals in excess of 12 inches. In fact, some resorts will report 16-20 if the frontal boundary stalls as expected.

Let’s get on with it! Oregon and Northern California get the onset of precipitation Thursday. It’s fast-moving but should land 3-6 inches for many resorts. In CA, the higher amounts are likely for the northern Lake Tahoe Region. That system moves through Nevada early Friday and spreads light snow with some moderate to strong winds for the Wasatch during the day (Snow intensity should be light for Utah beginning late AM Friday). In looking at multiple models I have high confidence that the frontal boundary will stall north of Salt Lake Friday night providing some significant totals near either the Ogden Resorts (Snowbasin can do well in this pattern with SW winds) or further towards Logan (Beaver Mountain). I mentioned the northern Wasatch resorts in my post yesterday. Snow will overspread the entire Wasatch Range Friday night.

Below: NAM 12 showing the heaviest snow setting up near Snowbasin or just north of Ogden. Decent amounts also for areas south towards Sundance and the Cottonwoods. Less snow is possible south of Snowbasin until you reach the higher summits of the Cottonwoods. Beaver Mountain is also likely to score nicely in this pattern. Below: The GFS American Model shows similar setup patterns and is even more bullish for the Cottonwoods and areas from Snowbasin north to Beaver Mountain near the Idaho border. There is less snow depicted between Park City and Snowbasin with higher amounts north of Ogden. 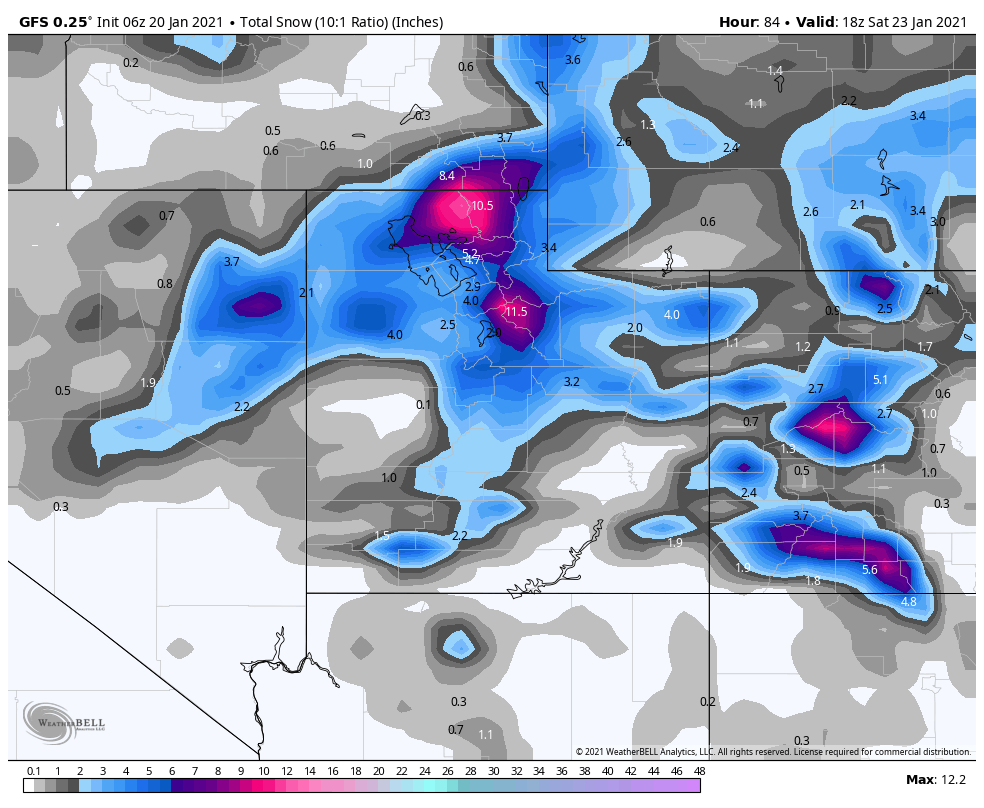 Below: The European Model is less optimistic for the Cottonwoods and areas south but continues to favor the trend of the northern Wasatch resorts. This is the least bullish of all the model runs but is often a good contender. 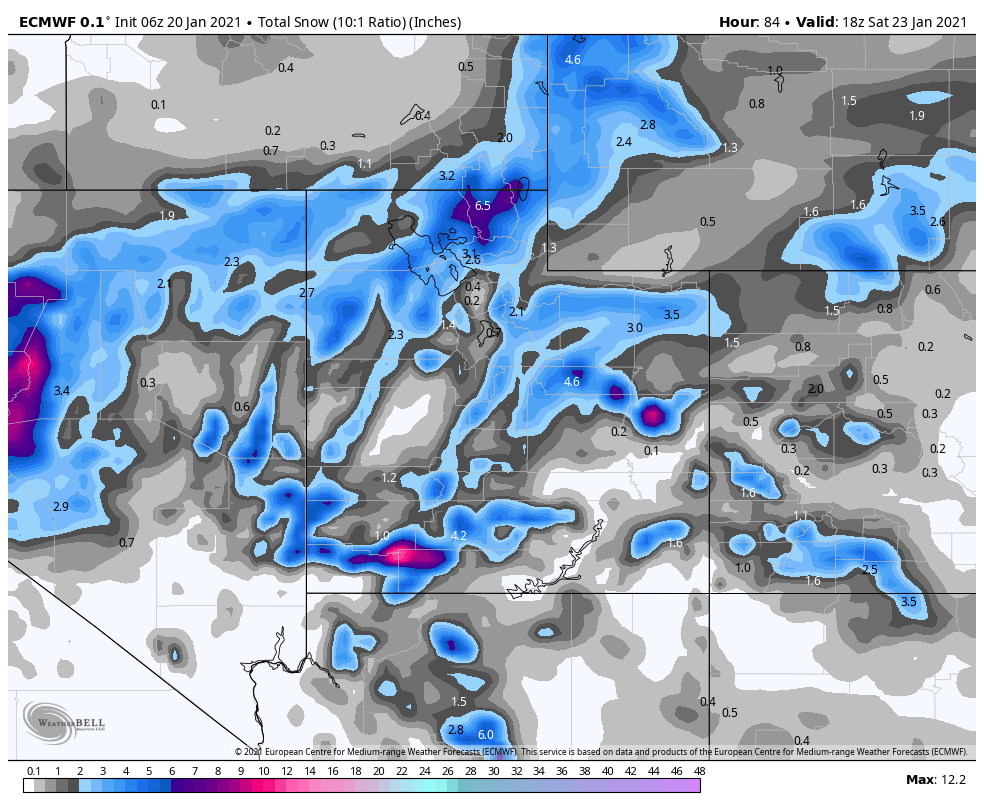 Bottom Line: Based on these models, and other data that I look at each morning, it’s likely that 11-16 inches will fall over many resorts in northern Utah by Saturday afternoon. Winds are from the SW with the highest moisture bands Friday night. It’s possible that Big Cottonwood might overperform Little Cottonwood or the highest totals end up being at Snowbasin or Beaver Mountain. You may ask, what happened to Powder Mountain? Powder is a wildcard, as SW winds normally favor Snowbasin. Park City area resorts should end up in the 6-12 inch range. Winds shift to the NW early Saturday and snow showers will continue or increase over the Cottonwoods especially near Alta.  Caveat: There are still some uncertainties so it’s possible that the Cottonwoods come in lower if the trend pushes the highest moisture further north. Big Cottonwood, especially Solitude may outperform initially. This system has good cold air, with high snow ratios (Right side up) so should provide good quality, however, low tide exists with below normal bases. “Just don’t send it full-on on your first run” Caution on long-term chases due to low tide.

The system from Utah drags into Colorado favoring the 4 corners. Moisture will be heavy at times Saturday/Saturday night providing significant accumulations for the San Juan range (storm ski Saturday). This storm as opposed to the last will likely extend up a bit further north into Crested Butte (Wildcard) and edge into Aspen. Even Steamboat will see some snowfall from this system. The I-70 corridor grabs light or moderate amounts (3-6) Saturday with the highest amount furthest west. I will have a better forecast for Colorado in a future post.

Below: The American GFS model for total snowfall through Sunday morning in Colorado. Significant amounts are likely for the San Juan Range and if you believe this model, Crested Butte might come up on the charts and even Aspen with SW winds pushing moisture into the Roaring Fork Valley. Steamboat is a wildcard. 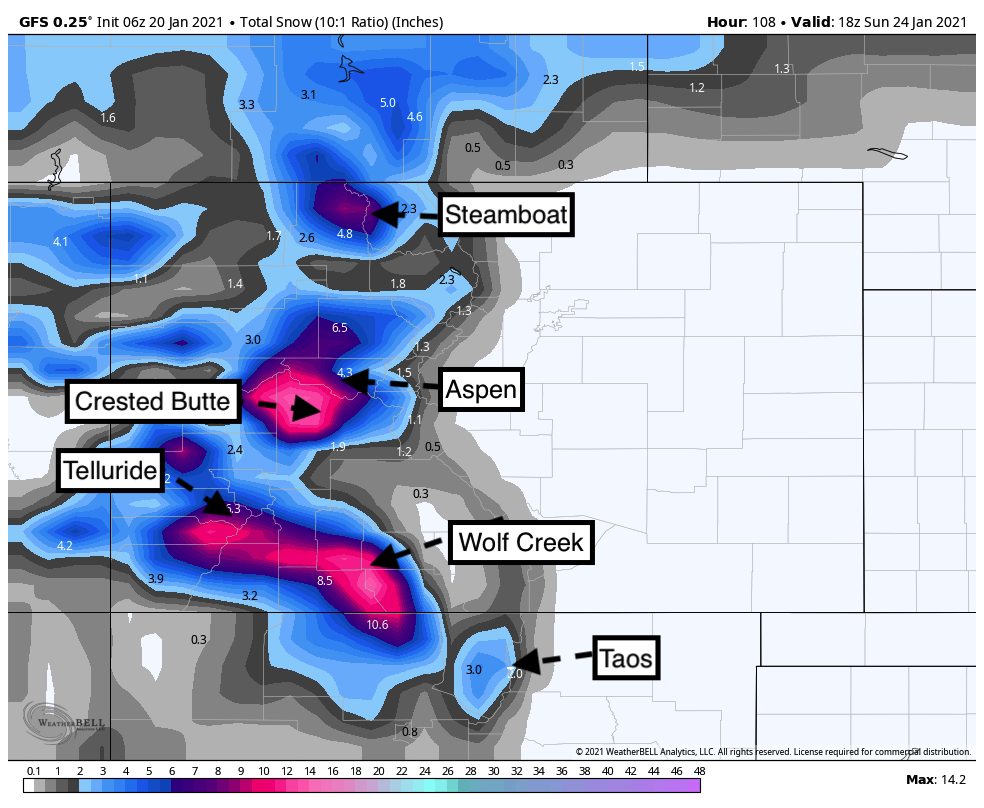 Storm #2 pushes into the PNW on Sunday for Washington and Oregon. This system looks a bit deeper than the Thursday event and will drag south over the Sierra by Sunday night. Widespread snow will be falling in California (A moderate event) that takes a southern path over the 4 corners next week. This is likely to kick off another significant event for the San Juan Range and most of northern Arizona. Moisture will push north into most of Utah however it’s likely that the central or southern ranges will be favored.

Looking out to mid next week a very interesting feature is showing up on the models. It appears to me that a strong atmospheric river will stream into northern California midweek. This narrow plume of warm moist air could land 3-5 feet of snow above 7500 feet but appears to favor the Mount Shasta Region towards the Oregon border. We need to keep a watch on this!

Below: Signature of an atmospheric river event aimed at northern California mid next week. You can see the very moist plume chain extending out into the Pacific with significant precipitation.

Enjoy the Powder everyone!