The past 24 hours brought round 1 of snowfall to the Cascades. 22 inches fell at Alpental (Snow telemetry) with 17 inches at Stevens Pass for opening lifts on Friday. Round 2 is just getting underway for the PNW and will move into the Rockies Saturday Night through Monday. A warm front will accompany the snowfall initially putting some upside down layers into the Rockies Sunday morning. Colder temps move in late in the weekend. 12-18 inches are a good bet for most of Oregon, Washington, Idaho central Panhandle, Wyoming, Northern Colorado, with the Wasatch a solid wildcard.

I hit Stevens Pass on Friday as snow started falling late Thursday night.  At 9PM there was an inch on the snow telemetry.  At 4AM there was 10 inches (Chase time). Crystal was at 6-7 inches with snow still falling.  Radar was heaviest along a Puget Sound Convergence Zone (West flow with cold temps). The odds of more than a foot were highest along or north of I-90. Alpental ended up with 22 inches by A weaker convergence zone evident on radar also set up over Crystal to the south.  Ski Patrol did not open the Backside of Stevens until 10:30 AM.  By this time 17 inches of light to medium density snow created nearly epic conditions, however there was still some evidence on some turns of an under crunch. It was well worth the chase.

The Cascades will grab another 9-16 inches of snow between Saturday and Monday.  The highest amounts will fall during the day Saturday (late AM – late PM) and again late Sunday into Monday.  The mountains favored with this next system will be Stevens Pass, White Pass, Mount Hood, Bachelor and Timberline.  Moisture will fall a bit later in Oregon so if you’re headed to your favorite resort you may score better odds of overnight powder Saturday into Sunday.  Amounts in Oregon including Bachelor might over perform the Washington areas.  Chase:  Storm Ride Saturday in the WA Cascades with some additional fresh on Sunday. Hit Oregon late Saturday into Sunday morning.  Moderate dump Sunday night into Monday for the Cascades that might put Monday as the top pick of the week (Better odds of moderate overnight pow).

In the Rockies models are consistent with a wide area of 9-16 inches for the Tetons, Wasatch and northern Colorado.  Southern Montana will see less, with the central Panhandle of Idaho in the 8-14 inch range. Sun Valley might sneak out a surprise with the models putting the heaviest moisture just north of the Ski Area.  The Tetons should wake up to 7-8 inches Sunday morning and see another 6-8 during the day Sunday. Temps are warming Sunday morning so density may ride a bit Funky at lower elevations. Colder air moves in late Sunday into Monday (Higher quality but moisture is decreasing).

Below: Temps warm to 1-2C at 4800 feet over much of the central to northern Rockies early Sunday (Warm front with precipitation) before cooling late in the day.  Expect some upside down layers Sunday Morning or on the optimistic side crust busters (Density can be a good thing).  Warmer temps may limit snow totals at lower elevations. 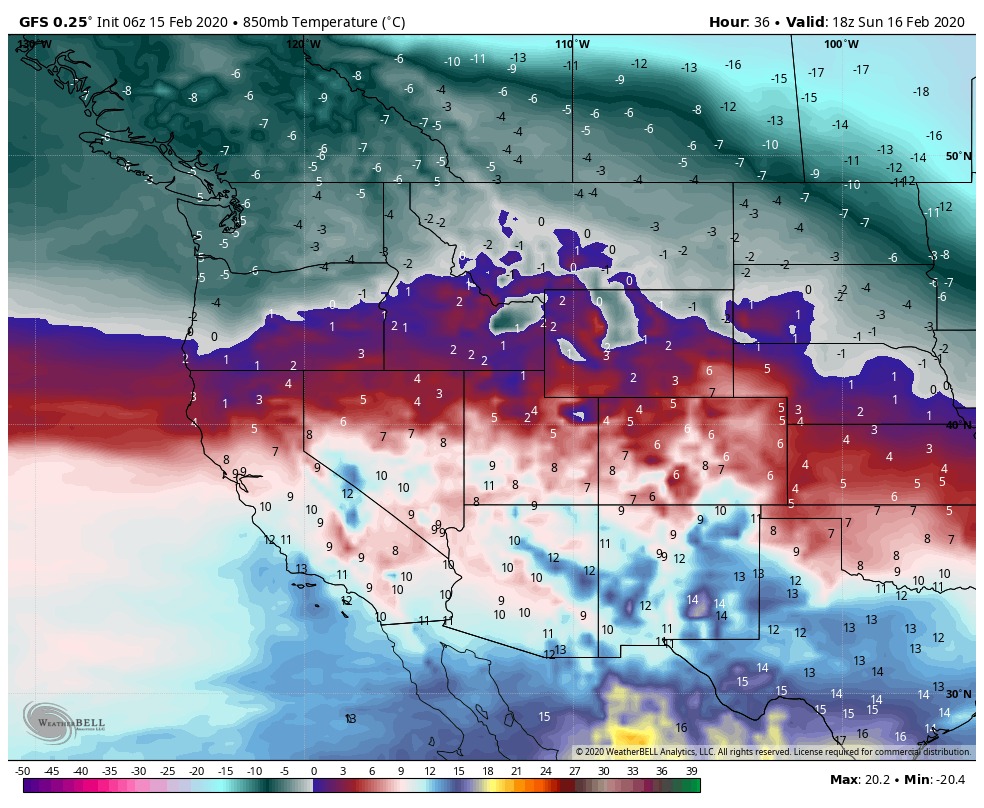 The Wasatch is likely to end up sneaking out a powder day Sunday late AM or early PM with lower amounts on the early morning report. The GFS and EURO favor the northern Wasatch Range so if you are looking to escape the holiday crowds consider Beaver Mountain (Northern Utah), Powder or Snowbasin, and Cherry Creek. Its possible that Powder Mountain lands 5-9 inches by 10AM with less to the south initially. Look for Park City to score just ahead of the Cottonwoods. These areas may end up getting snow totals up a bit sooner as moisture slowly drops south over I-80 and the Cottonwoods by mid morning. I have chased northern Wasatch only to finish further south. With Westerly winds all mountain ranges will see at least moderate snow with no single range scoring any major surprises. Total snowfall above 9000 feet will be 12-15 inches. Lower amounts will fall near the bases due to warmer than optimal temps initially. Colder air in the Wasatch Sunday night will keep snow showers going albeit weakening with higher quality freshening.

Below: University of Utah Weather Plumes averaging multiple model runs for Alta showing decent confidence (Tight lines) for up to 15 inches.  The steep curve initially happens on Sunday for some 1-2 inch per hour totals during the late morning to evening hours. Your last chair on Sunday might be your best run. 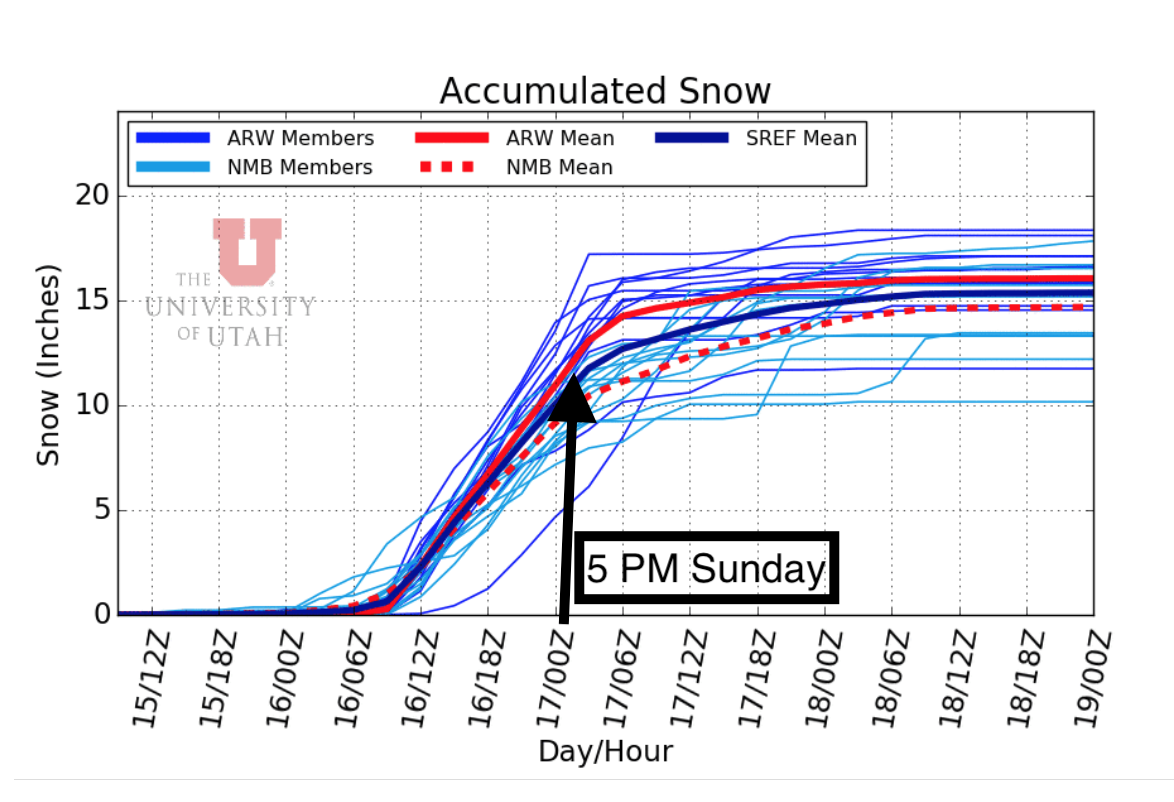 Meanwhile in Colorado, models have been very consistent with significant snow falling in the northern Elk, Flat Tops and perhaps Rocky Mountain National Park peaking late Sunday to Monday.  12-19 inches are likely for Steamboat with 5-10 inches along the I-70 corridor (Higher amounts north of I-70). Overnight snow will be a bonus for many areas Monday morning even though some snow will fall during Sunday albeit lighter.  The Euro and GFS agree on this scenario with the Canadian pushing higher totals along I-70.  I have high confidence in Steamboat and mountain ranges west of Fort Collins, Rabbit Ears Pass, Northern Rocky Mountain National Park (Wildcard). I have decent confidence for the I-70 corridor albeit lower amounts than the north. Wildcard pick?  Beaver Creek who sometimes scores with westerly winds. Breckenridge also can come up with a surprise. Best times to ride powder will be late Sunday and early Monday. 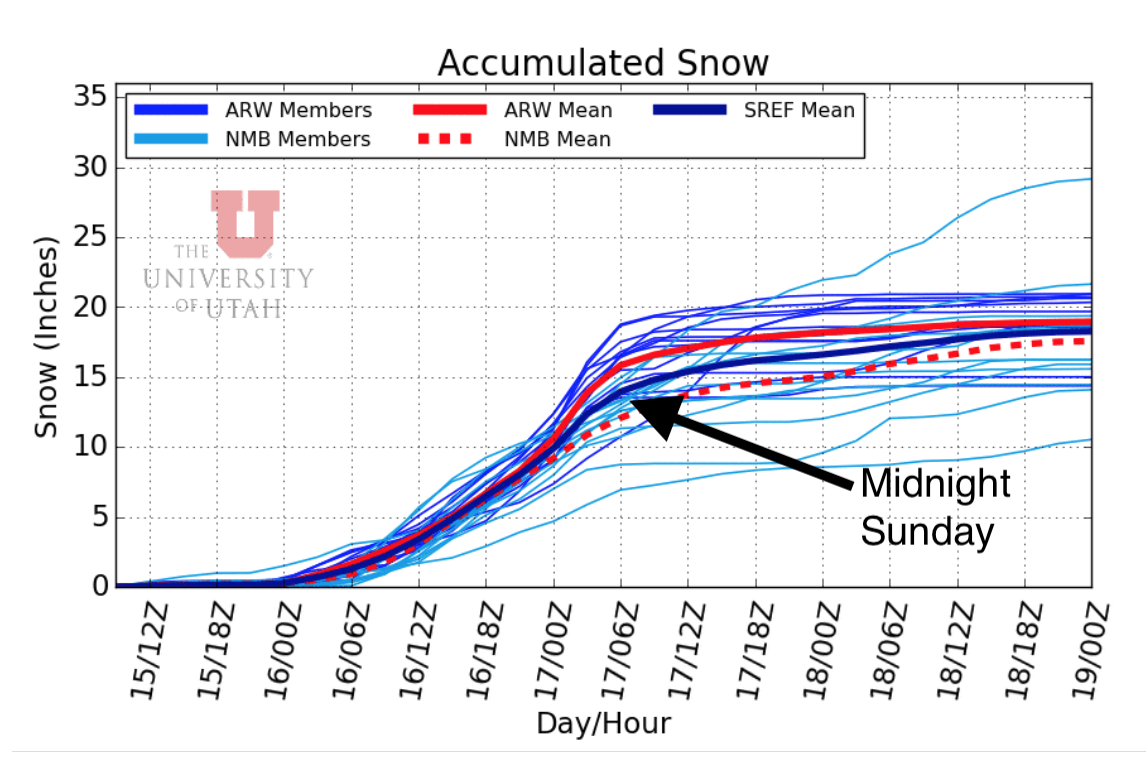 Below: Less confidence for Vail Pass with 5-15 inches (Widely spaced lines) by Monday morning.  Beaver Creek as mentioned in the post might reap deeper rewards (Pure speculation based on wind direction). 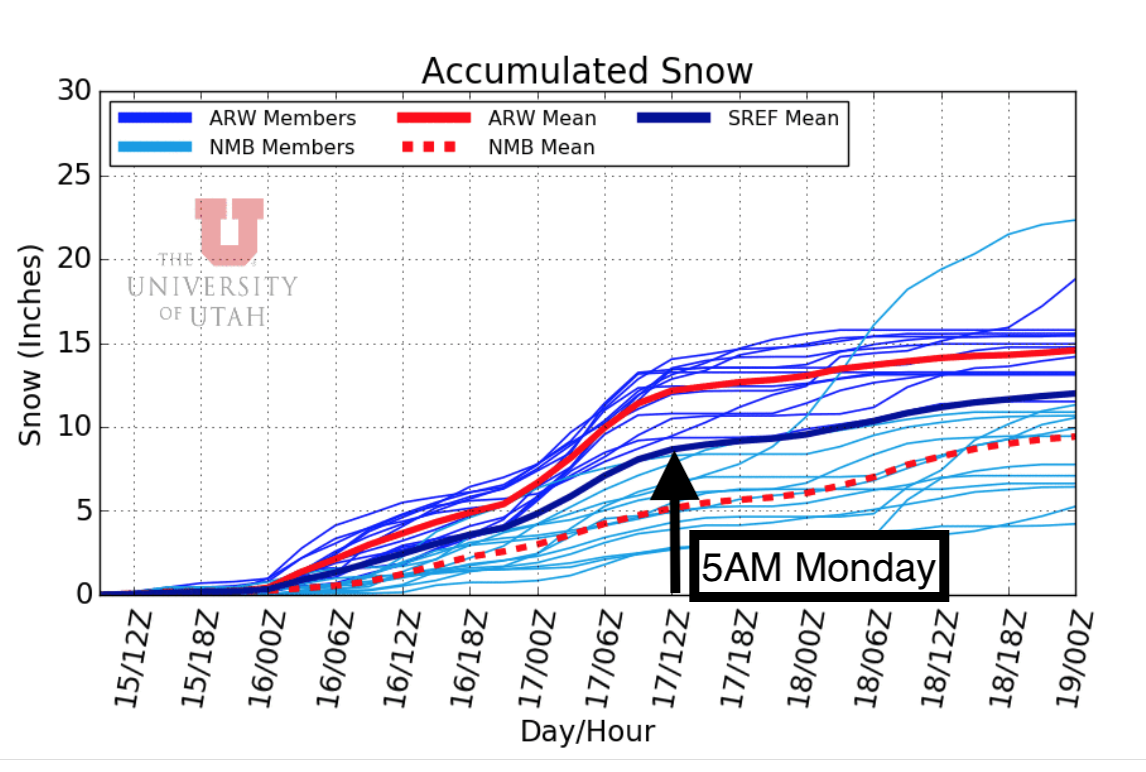 High Pressure takes hold next week for the West with the exception of a system that might swing into New Mexico on Wednesday.  I am not seeing anything noteworthy at this point.  There might be another decent system for the Pacific Northwest late next weekend into early the following week.