7 Day Powder Forecast: Deep Snow For The Northwest and Canada

7 Day Powder Forecast: Deep Snow For The Northwest and Canada

The week ahead looks promising for several feet of snow for the Cascades, Coastal Vancouver (Whistler, Mount Washington, Cypress) with moderate leftovers for the interior of BC (Decent overall amounts). Temps are going to start out cold in BC with snow to the Valley before rising somewhat later in the week. The ski areas in the Cascades, especially southern areas including Oregon will see a game-changing week just in time for the winter Solstice this Saturday.

I just completed a 3 State Chase in 4 days nabbing 47 inches in total with 3 resorts.  I started in Idaho nailing a great storm ski day at Grand Targhee, progressed south to the Wasatch on day #2 hitting Snowbird (2 days) and took on my grand finale at Vail on Sunday scoring bluebird powder in the back bowls.

Below:  The wind impacted side of the Bowls (Forever) seen here.  The leeward side, especially Headwall was much deeper.  Photo: Powderchaser Steve 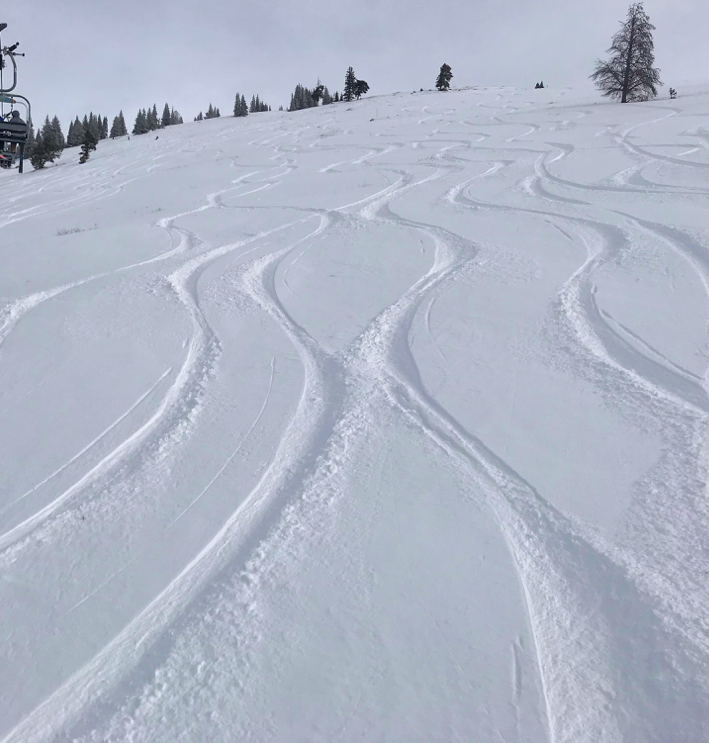 While this chase brought lots of snow, there were many issues that got in the way.  High winds persisted over the Wasatch both Friday and Saturday (Upper mountain lift issues with 75-95 MPH Gusts). Temps were on the warm side initially (Denser snow) followed by blower conditions on the tail end. There is nothing worse than getting skunked by winds and lift closures. Overall, if you stuck to the right aspects at Snowbird the riding was deep Friday (12-15) but pretty dense at lower elevations. Saturday offered much better quality (Colder) but with stronger winds.

The Grand Finale Sunday was a tough decision with my overnight in Grand Junction (Saturday) and a 15-inch snow report from Highlands and just 9 inches reported at Vail. It’s 5:30 AM and I am pulled over in Glenwood with a tough decision. I knew the back bowls at Vail closed early on Saturday so that 9 was legit for how much snow would be up top not to mention good wind loading. I studied the snow telemetry carefully from Highlands and Ajax and determined the snow report was simply an error. The snow telemetry at Highlands Bowl showed roughly 7-10 inches with only 5-7 overnight (4 fell on Saturday PM). The Cloud Nine data (The data that is most likely used for the snow report) showed around 7-8 inches.  There was a jump from 7 inches to 15 inches for 2 hours yesterday (Telemetry can sometimes offer erroneous readings) before it settles back to the accurate numbers. My guess is that the reporter saw the 15 and took this to be the actual reading. If 15 inches really fell at Cloud Nine I would suspect that the actual Bowl telemetry (Northwoods) would have been much higher. Ski Patrol confirmed my observations later on Sunday.  The decision based on my speculation took me to Vail where conditions were fantastic if you were there early. I am sure Highlands was great also, but just not the 15 inches that were on the report for mid-mountain (Chime in with a comment if you were there).

Snow begins to fall heavily over North Vancouver Island early this week and eventually adds significant snowfall to both Whistler and Mount Washington (Vancouver Island). Temps are cold enough for low elevation snow. Peak snowfall will happen at some point Tuesday morning through Wednesday. 12-18 inches are likely for these areas at mid-elevations. Interior BC grabs the remnants with a steady stream of light to moderate amounts early this week (No single deep event). Meanwhile, in the Cascades, colder temps and some light snow is likely for the northern areas towards Mount Baker or the interior.

Below: Total snowfall by Tuesday afternoon for the BC, highlighting northern areas, with a good 12 inches likely further south towards Whistler and Vancouver Island. 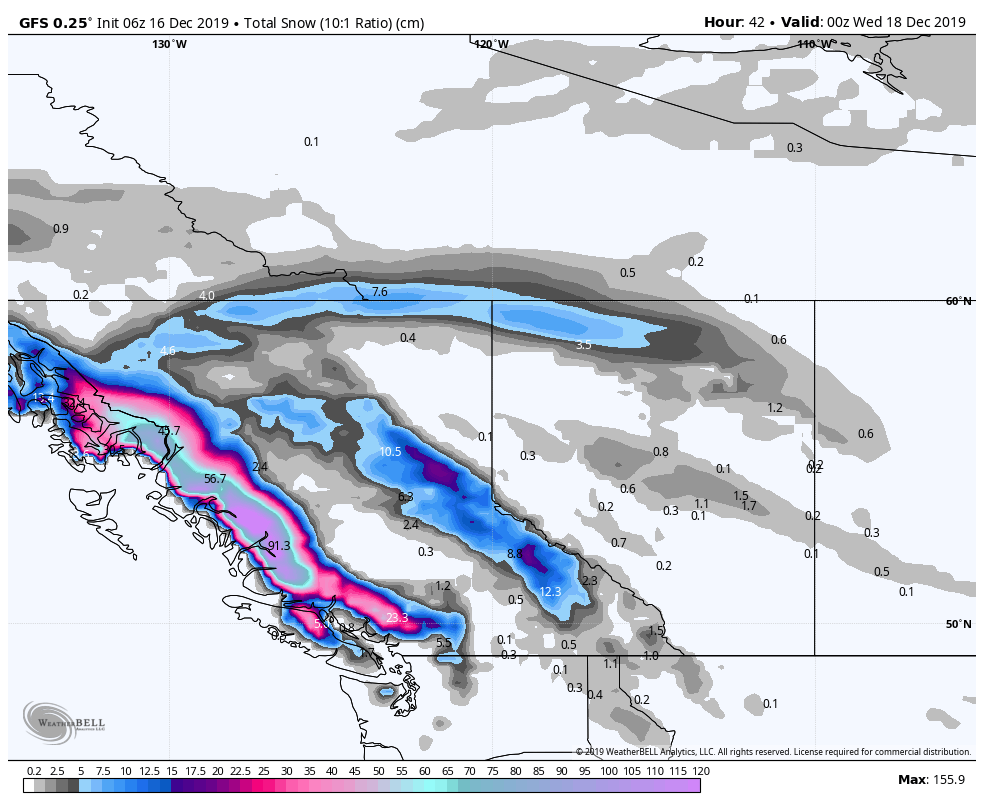 Light to moderate snow will continue mid to late this week for areas of BC, especially coastal regions. Snow levels will creep up with some rain to the bases.  Total snowfall for upper elevations of coastal BC will range from 1-3 feet.  The highest amounts might land on Vancouver Island a the summit of Mount Washington.

Below:  Significant snowfall totals (Total show here from Monday to early Thursday morning) for BC (3 feet plus at upper elevations).  Snow levels creek up somewhat mid to late week so much less at the base. Some snow is also beginning to fall Wednesday night in the Cascades. Interior BC is in the 6-14 inch range. 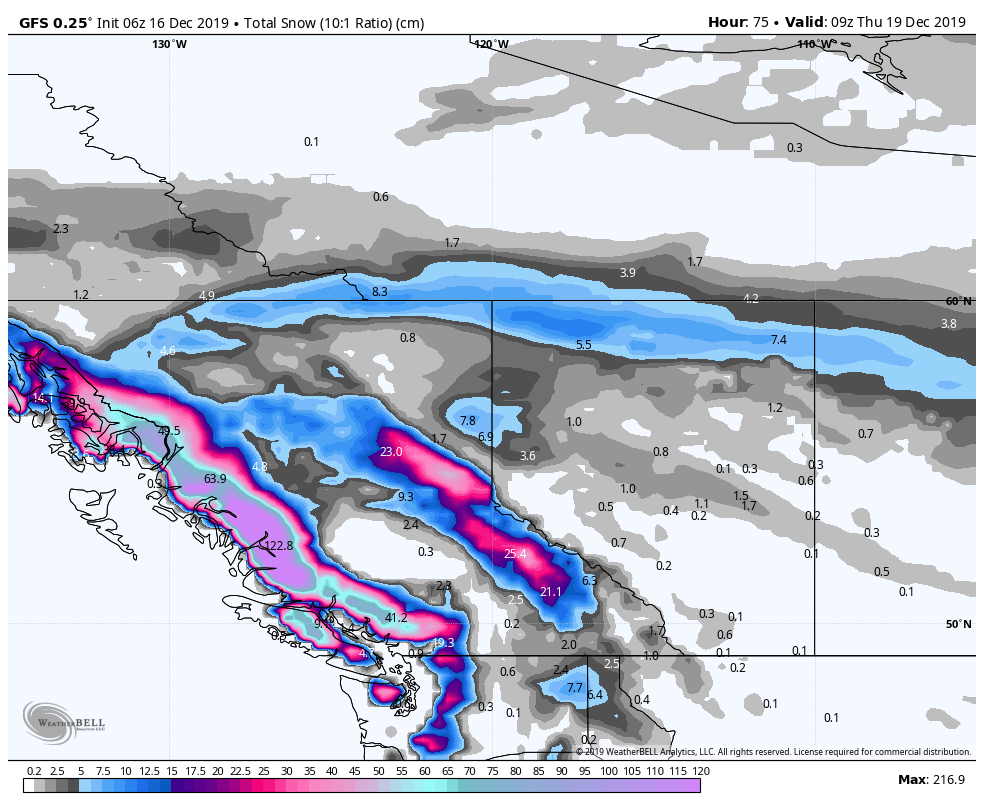 The Cascades grab moderate snowfall beginning on Wednesday with 3500-4,000 foot snow levels. Moisture increases on the tail end of the week with a slight warming trend.  Snow levels may creep up to just above the bases (4-5K) as the heaviest moisture is falling Thursday/Friday.  Expect 2 feet or more of base building snow for the entire Cascade Range.  This includes Oregon!  The sum totals from the entire week could approach 3 feet especially the southern Cascades of Washington (White Pass, Crystal) or in Oregon.  The Interior Cascades will see lower but respectable amounts (Cooler temps).  If you believe the GFS, Schweitzer could get nailed late this week or weekend with the Euro dropping precipitation further south.

Eventually, moisture will move east as it weakens late this week possibly favoring Idaho resorts in the Thursday or Friday timeframe. Schweitzer, Brundage, Tamarack or perhaps even Sun Valley (Wildcard), are all possible suspects.

Xmas week might bring a more active period to the Sierra or Rockies, but its too far out for confidence.   Check out our Concierge program if you want to score deep powder!