The next 2-5 days look epic in many parts of the West, especially for the Sierra, southern and central Rockies. A very cold and moist airmass is moving into the Sierra right now with much-needed snow! The track scoops south blasting the southern 4 corners late this week. Moisture feeds to the north under southerly winds into most of Utah, meandering into Wyoming and Colorado late week. Chases are abundant. If resorts were all open, we would be starting in CA right now and chasing east as the week moved on. Some areas of the Sierra might see 4-7 feet by Sunday.

The last storm for Utah and Colorado was one of my trickiest forecasts in a long time.  I mentioned a skunk hole over Summit and better moisture to the west such as Telluride Aspen and perhaps Eagle County. There was no question on the chase forecast that the metro areas north of I-70 would get crushed.  The winds were favorable in these locations. Why did areas further west do better than Summit when the bulk of moisture was over the Front Range.  Winds on this storm were from the W-NW on the far western side of the State with N NE on the eastern side.  Upslope existed near Denver while a favorable downsloping pattern existed further west, especially Eagle County extending into the northern San Juan range (Telluride does well with NW winds).  I completely missed the forecast on Monarch!  I am surprised that Loveland and Winter Park did not report higher numbers (Wildcards).  The really cool thing is that the models picked up on this quite well allowing me to forecast this pattern.

Totals in Colorado in the past 24 hours.

Winter Park 1 inch (Missed the mark on this one).

The Sierra gets 18-28 inches between Tuesday night and Thursday morning. Cold fresh turkey feathers may continue into the holiday.  The highest amounts (3 feet) will be found on the Crest favoring the southern ranges slightly (Kirkwood is likely to come out on top or perhaps Mammoth). I would be chasing there if there was a base.

Below: Wide area of 2 feet or more for the Sierra range, might be deeper on the southern Crest areas from Kirkwood to Mammoth.  All areas do very well this Tuesday night to Wednesday.  Valley snow will also be deep. 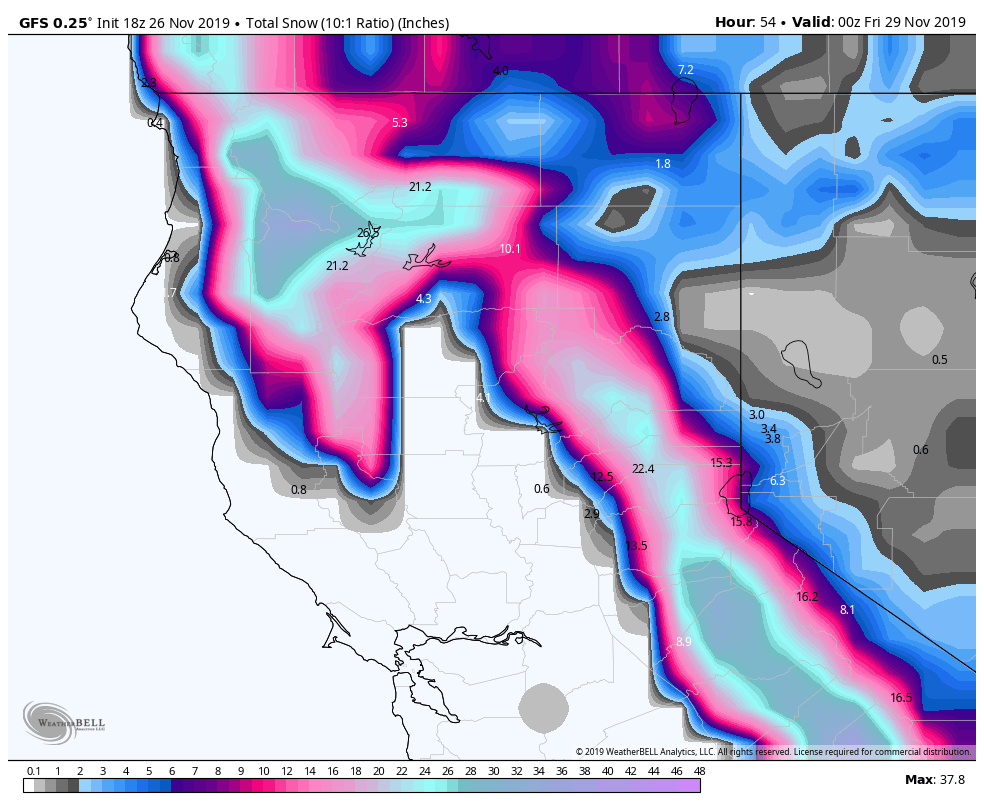 In the Rockies, some moisture kicks east apart from the main energy (Parent low is dropping well south into California).  This moisture kicks into Utah for Wednesday (light to moderate snow)  The winds are the tricky factor for Utah predominately from the South.  If you are on the chase, the heaviest precipitation for the Rockies comes late Wednesday night into Friday for most areas.  The focus will be the southern San Juans of Colorado, southern Utah and northern Arizona.  2-3 feet will fall at all of these locations by late Friday.  In northern New Mexico, the models are very bullish for 1-2 feet especially Friday into Saturday.

Below: The University of Utah ensembles for Arizona are off the charts this week with up to 50-80 inches of snow possible. These might be slightly overdone! I would not be surprised to see 40-50 inch totals by late Friday. 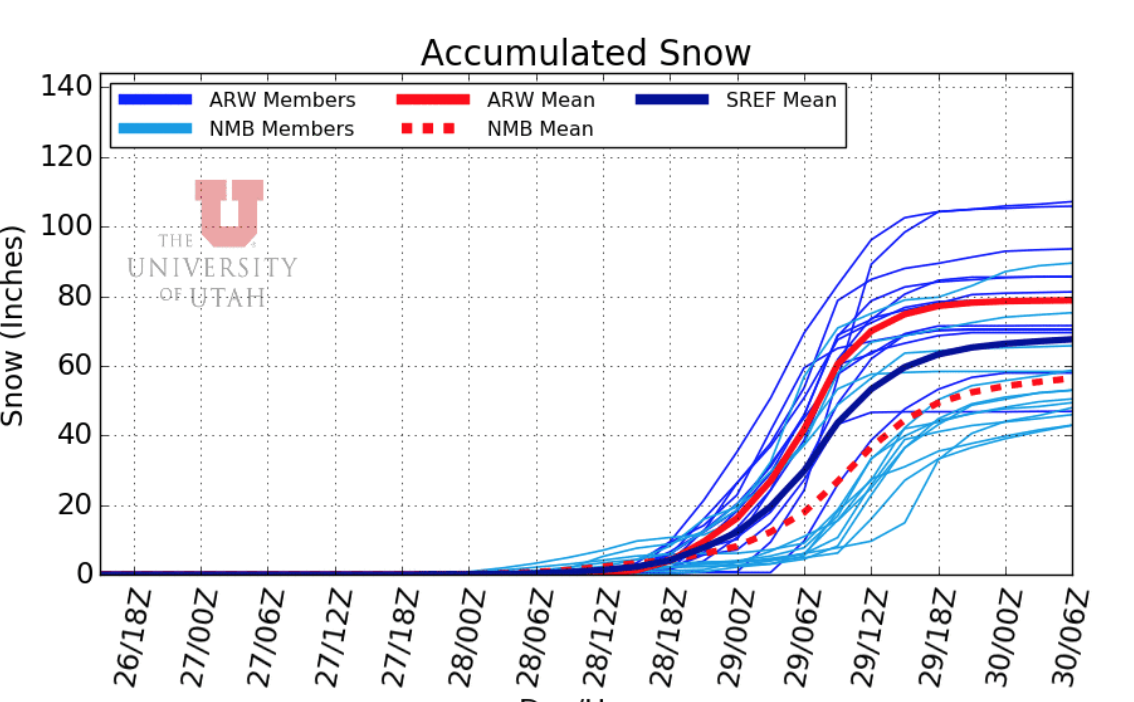 For northern areas, Utah continues to score steady light to moderate snowfall (No single deep event in any 6 hour period) with moisture streaming up from the south.  S or SW winds should favor Sundance, Deer Valley, Park City (Canyons will see less), Snowbasin and Big Cottonwood.  While orographics, wind directions are not ideal for Little Cottonwood the University of Utah ensembles, conservative NAM 12 KM all point to 20-30 inches for Alta.   My forecast will generally include all of Utah’s northern mountains to be in the 15-23 inch range by Saturday morning.  Big Cottonwood (Solitude, Brighton) or perhaps even Deer Valley and Snowbasin may come up with some surprisingly deep numbers on this range.   Alta might come in less even though the models are bullish for more.  For the Tetons, some moisture will make it to the ski areas favoring JHMR for 5-9 inches this week (Teased on the northern fringe).

Bottom Line: Utah will be deep over an extended period of 2-3 days peaking on Friday and ending on Saturday.  The southern mountains will see the highest amounts. If you want to believe the NAM over the GFS, amounts in northern Utah could approach 30 inches by Saturday. I am sticking to a conservative middle of the road purely based on Wind direction and orographics (15-23 inches). 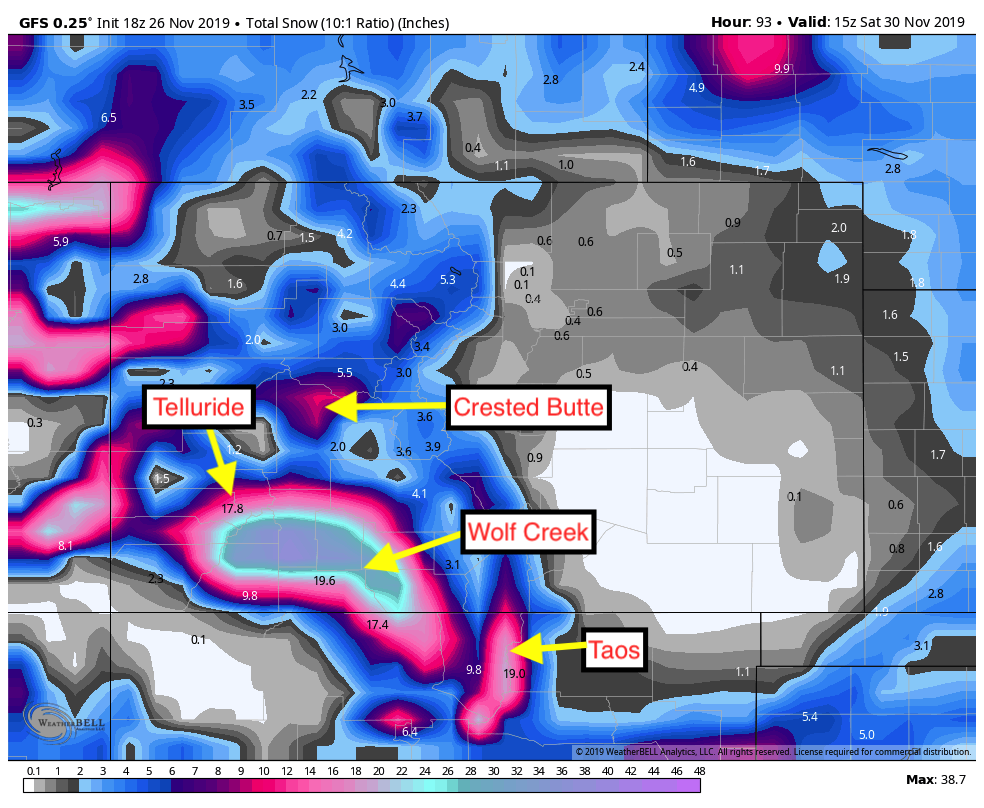 This is getting even more exciting!  Another deep low pushes into the Sierra late this weekend bringing another 2 feet or more of snowfall to many areas of California and Nevada. That system is likely to weaken somewhat as it drags east over the Rockies bringing an increased chance of light or moderate snow to many mountain regions of the west.  Yet, another storm is on the ensemble runs for the Sierra late next week that might be somewhat significant once again.  That system may be another snow producer for the Rockies as well, but its too far out to forecast with confidence.

Below: Epic map!  Total snowfall for the Sierra through Sunday (Includes both storms- current through late Sunday night).  50-70 inch storm totals or more!  This is epic!  Get ready to chase as resorts open.

Below: Ensembles showing a low-pressure trough moving into the Sierra late next week! 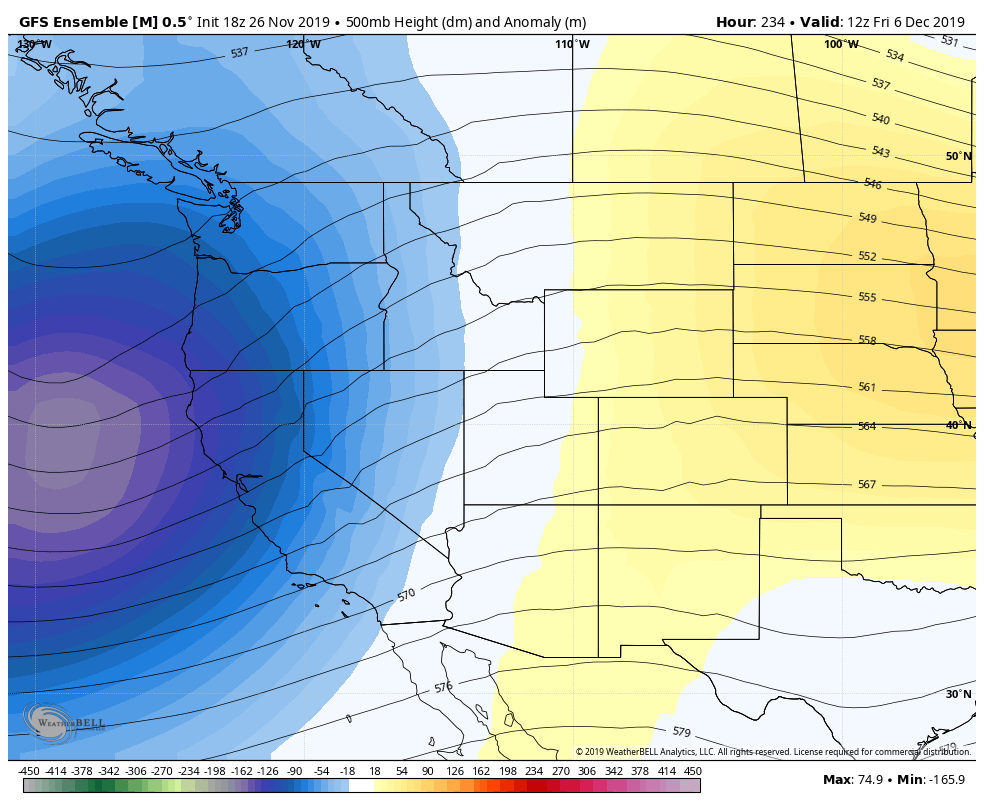 Bottom Line:  Deep storms are lined up for much of the west favoring the Sierra in the extended range.  Some of this moisture trickles into the Rockies early next week.  The 3rd storm next weekend is too far out for confidence.  We are in a good pattern!

Thanks for following Powderchasers! Please support us with a donation or sign up for the powder concierge if you want custom chase forecasts.

Luke has been doing a great job while I have been on vacation!  He is one of the best snow forecasters I work with.