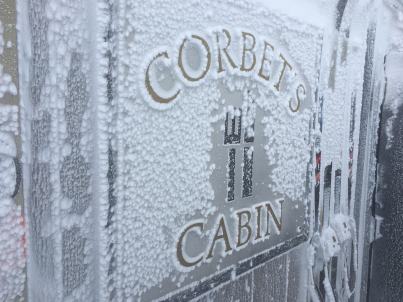 Lines that have never been skied before continue to open up @Jackson and it’s only getting deeper as a “pacific system” dumps more base building snow on top of an already bountiful snowpack.

As we skied off the deck of a buried Corbet’s Cabin this morning the snow was heavy but held an edge. The top 1,000 feet skied amazing with the whole upper mountain blanketed in a new sheet of mid-to-heavy moisture content snow.

But once you hit mid-mountain– things got dicey. 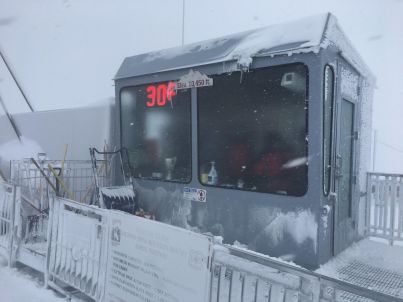 The Bowl was BUFFED this morning and the top of the tram was definitely the place to be. From the tram down, the untracked stuff was skiing like a PNW pow day and the smiles on everyone’s faces in the Sublette lift line confirmed that report.

By 10:00am, ridiculously sticky snow made parts of the mountain difficult. Everything below the 9,000′ mark (summit of Thunder) and above the 7,000 mark was variable.

Skiing the run outs was dodgy to say the least. Watching from the chairlift, the scene of people sending cliffs to shag carpet runouts was both funny and terrifying. Everyone from the most seasoned local to the greenest vacation skier was forced into mandatory pizza’s when they hit the cat track.

Luckily, the temps dip tonight and the intermittent mountain snow will hopefully give a reset to the snow surface following the latest warming trend.

Multiple days will be needed for the upper mountain snowpack to adjust to the new load. Please exercise extreme caution when traveling through avalanche terrain over the coming days.