Located in the southeast corner of Utah, the Bears Ears have long-held a special place in the hearts and histories of its native inhabitants. So in order to honor the place and its people, Barack Obama has designated the area as a national monument– all 1.35 million acres of it.

A confluence of native-American backgrounds, the Bears Ears are sacred to the Hopi, Navajo, Ute, and Zuni tribes. In the past decade those tribes converged on a policy proposal that would protect the “Ears” along with a variety of other, proximal areas that hold environmental or cultural significance. The original proposition included a protected area totaling approximately 1.9 million acres. 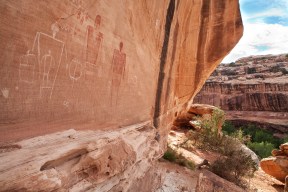 These areas include some of the most stunning archeological sites, fragile habitats, and vital watersheds.

The new designation will also protect the confluence of the San Juan and Colorado rivers and while native-Americans and conservationists praise the this news, some are not so pleased.

PROTECTED: #BearsEars National Monument! See why this landscape is so deserving of protection. #StandWithBearsEars https://t.co/RKzOEGYMoV

Republican representatives from the state of Utah say this type of federal designation neglects the local’s voice. Orrin Hatch even went so far as to condemn the bill saying, “in the next Congress under President [Donald] Trump, I will do everything in my power to reverse this travesty.” He went on to explain that such action is part of the reason for the divisive opinions blossoming over the topic of public land. The White House has since stated that this action is appropriate and in line with the voices of native inhabitants, along with a variety of local representatives from government officials to business leaders.