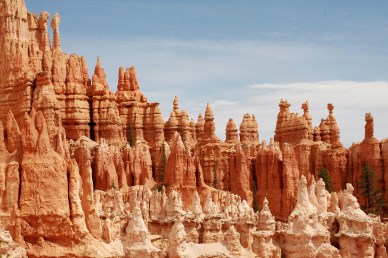 The St. George News is reporting that the legendary Sentinel formation in Bryce Canyon National Park has toppled over, leaving just a nub standing where once a 10-story tall, hoodoo rock segment pierced the Utah sky.

The formation, which was clearly visible from the Navajo Loop Trail, fell sometime on Monday night and all that’s left is the narrow foundation upon which the rocks was held in place. According to the National Park’s most recent Facebook post, “Frost-wedging finally took its toll last night, chiseling away the last of its base.”

Hoodoo formations are created by two geological forces with the first called “frost-wedging.” Frost wedging is a process by which water seeps into the rock and freezes overnight, causing cracks to form in the rock. That process, combined with rain erosion, sculpts these asymmetrical rock formations into shapes known as “Hoodoos.”