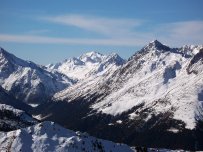 While ski touring near the Hintertux glacier ski area in Austria, a 25 year-old skier was caught and killed in an avalanche reports The Local.

The avalanche occurred around 2pm on Sunday at an elevation of 10,750′. The man who died was accompanied by a 44 year-old partner who was partially buried and survived the ordeal. Authorities spent hours trying to find the buried man until they finally found his body in the early evening hours on Sunday. The avalanche was the second incident reported over the weekend. So far, reports are indicating that nobody was hurt in the second incident.