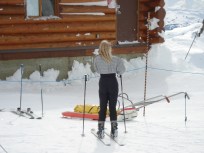 “She must work out” | Photo: Andre Charland

For many ski bums, love is a short-lived experience and the adage, ‘you didn’t get dumped, you just lost your turn’ is as true as they come. That said, some ski towns offer singles hope.

These ski towns don’t contain your run of the mill crusty ski bums but instead offer singles a good chance at finding love, either for a night or a lifetime of riding double chairs.

Here are the Top 5 Ski Resorts For Singles.

Park City is not only a real town with real residents but it’s Utah’s premier winter tourist destination as well. Typically, bachelor/bachelorette parties run rampant in this ski town that also hosts Sundance every year, which offers plenty of chances for a one night stand and who knows… Maybe Scarlett Johansson is feeling lonely? But I digress. Park City is also home to burgeoning outdoor businesses including backcountry.com, Rossignol USA, and Skullcandy, which all have their HQ’s in Park City. That fact should give hope to those ski bums looking for long-lasting love in a seasonal ski town.

Just a 80 mile drive north of Montreal, Mont Tremblant is the North American ski resort with a penchant for heavy apres style and hard partying French Canadians. Also, its proximity to Montreal, makes the resort a weekend destination for weekend warriors from the city. So if you’re looking to acquire a Canadian wife or husband and the dual citizenship that comes with it, look no further than Mont Tremblant.

South Lake Tahoe is the promise land for singles in the Tahoe area. Although Reno may seem appealing from an outsider’s view, it doesn’t offer much as far as the ski bum is concerned. South Lake Tahoe and Heavenly on the other hand is a free-wheeling, drinking ski culture that combines schusshing with slots. Not to mention the “Unbuckle Party” at the top of the gondola runs from 3:30-5:30pm daily and features live DJ’s, not to mention the famed Heavenly “Angels.”

This one is kind of a no-brainer. If you’re looking for a sugar daddy (or momma), you’ve arrived. From the countless bars and night clubs in the town of Aspen to the apres scenes at every single mountain, singles need not look far. My advice, post up at the Hotel Jerome bar and look for a lonely divorce, buy her a glass of chardonnay, and ask her questions. Chances are, you’ll be sleeping in a 5-star hotel tonight.

With Vancouver just a couple of hours down the road, Whistler is a singles dream. The town of Whistler has a bustling nightlife that is constantly being inundated by fresh faces from the metropolitan area that frequents this BC ski resort. Don’t believe us? Watch Apres Ski on Bravo… Just kidding.