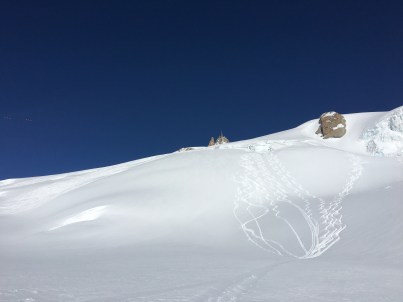 Can you see the gondola cars on the left? Yeah… | Cover Photo: Bonita de Boer

In a situation we believe involves the Helbronner Gondola (also known as the Vallee Blanche Aerial Tramway), a group of 45-some people are spending the night in gondola cars located over a hundred feet above the Mont Blanc Massif. The really unfortunate circumstance comes after Gondola cables crossed, causing the lift ops to stop the aerial tramway reports the BCC.

While having some of the most mind blowing lifts (i.e. The Aiguille du Midi), Chamonix is also infamous for having some of the most outdated and poorly run lift operations in the world. How do they say, “la preuve est dans le pudding?” Well that pudding is getting pretty stinky while sitting precariously through a cold night above 11k feet. “C’est la merde.”

“They have water and some means of communication but are beginning to find it’s taking a long time.” – Mathieu Dechavanne, Compagnie Du Mont-Blanc (Quote Courtesy of the BBC)

And it gets worse. The people stuck in the gondola cars feel like they’ve been given the short straw after half of the cars were evacuated via helicopters before nightfall suspended operations.