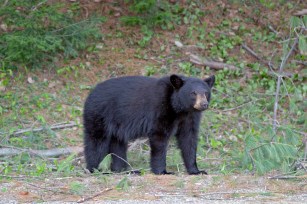 Shots were fired and a young black bear is dead following what appears to be an act of self-defense by an Aspen Skico employee on Saturday morning reports the Aspen Times.

The employee in question was working at Aspen Mountain‘s Sundeck restaurant on Saturday morning when the bear reportedly charged. This past Friday, one employee even shot the bear with a non-lethal bean bag gun to deter the bear from returning to the restaurant. That attempt was ultimately unsuccessful as the bear promptly returned the following day.

In an interview with the Aspen Times, Colorado Parks and Wildlife officer Perry Will told one reporter, “[the bear] was starting to show no fear for people and aggressive behavior.”

The deadly gun shots came after the employee’s 12 gauge shotgun reportedly misfired. The second shot from the shotgun stopped the bear in its tracks. At that point, the employee pulled a pistol and shot the black bear a second time. Employees had previously tried to scare away the bear earlier that morning with no success. It was that behavior that prompted the employee to bring a firearm to work.

“From what I understand he felt his safety was threatened.” – Mike Porras, Colorado Parks and Wildlife Spokesperson

After the initial shooting, the bear retreated underneath the Sundeck where Parks and Wildlife officials would ultimately put the bruin out of its misery. The gondola and Sundeck were closed during the ordeal.