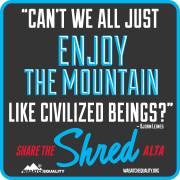 Over the past few years, snowboarders with Wasatch Equality have repeatedly fought against Alta’s skiers only stance with a rueful temperament that can only be described as unwavering.

However, Fox 13 is reporting that those efforts might have met their match this week after the 10th District Court in Denver refused a petition by the group to revisit their previous decision. The prior ruling dictates that Alta is well within its rights to keep the ski area “skiers only.”

Having already ruled against Wasatch Equality’s claim that the ski area in Little Cottonwood Canyon was discriminating against snowboarders and therefore violated the 14th amendment, the court felt it was unnecessary to revisit the previous ruling. Members of the court believe their ruling coincides appropriately with the law.

With their petition denied, the only option left for Wasatch Equality is to attempt to bring their case to the Supreme Court. However, getting to the United States Supreme Court is no easy task. The Supreme Court is known for taking previous rulings very seriously and are often inclined to trust the district courts unless a glaring violation of the constitution is evident in the case.