Avalanche Filled Weekend In Interior BC Kills One, Leaves Many Injured

Avalanche Filled Weekend In Interior BC Kills One, Leaves Many Injured 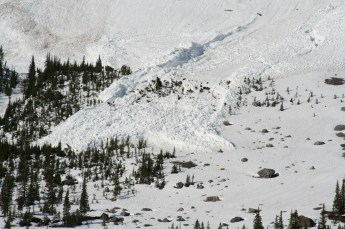 Avalanche From 2007 | Photo Credit: Strange Ones via Flickr Creative Commons

This past weekend has been a tragic one for British Columbia as a pair of avalanches near Golden, British Columbia killed one snowmobiler and left 7 others injured reports CBC. The fatal accident in question occurred late on Saturday and involved four snowmobilers, who were riding in the Quartz Creek zone. The other incident happened close to Esplanade Mountain, also near Golden, and injured 6 out of a group of 13 skiers.

“This weekend has brought more tragedy to our mountains because of avalanches. Our hearts break for the families of those who have lost loved ones to B.C.’s backcountry this season,” Naomi Yamamoto

A fireman from Calgary has been killed while another was left injured after an avalanche struck a group of four snowmobilers on Saturday. The other snowmobilers were left unharmed. The fireman has been identified as Nick Roberts.

Avalanche Canada Discussion: On Saturday one person was killed and another was hospitalized in a large avalanche in the Quartz Creek area west of Golden. This size 3 snowmobile-triggered slab avalanche occurred on a S-SW aspect in the alpine and is suspected to have released on the Feb. 12 interface.

A group of 13 skiers were on a self-guided tour on Sunday when an avalanche struck part of their group. Out of the 13, 6 were injured including a 64 year-old man from Cranmore who was flown to a hospital in Calgary with life threatening injuries. A 58 year-old woman from Calgary was also flown to her hometown with a serious injuries that are not being considered life-threatening. The others were given medical attention in nearby Golden for minor injuries.

“There is potential to trigger very large and dangerous avalanches, especially in the Northern part of the Purcells. Conservative terrain choices are essential.”– Avalanche Canada

Here Is The Avalanche Advisory For the Purcells This Week.

*Be safe out there and as always Know Before You Go