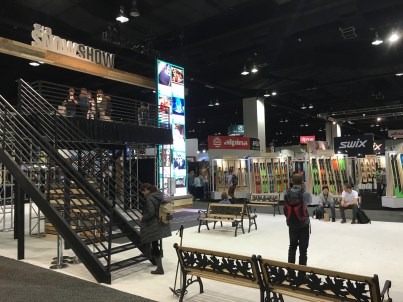 After spending two days testing as many skis as humanely possible at the SIA sponsored “On the Snow” event @CopperMountain, we’ve walked away with a new knowledge of this year’s bro’d out hard goods lingo as well as a new appreciation for a variety of skis. While, we’re saving our best and worst of SIA for later this week, we were impressed by 5 skis in particular that fall into the “daily driver” category.

Note: All our daily drivers are between 95mm-110mm underfoot

While some of the more backcountry freestyle skis by Atomic are falling somewhat short, their newly introduced Vantage series is holding strong. The Vantage 100 does awesome on hard surfaces but is no slouch in the soft stuff either thanks to its “all mountain rocker” and the inclusion of titanium in the ski’s design. One thing that separated the Vantage from the rest of the field was that its tail that seemed to noticeably load the next turn instead of washing out on steeper pitches. The downside of this being that the ski is not as forgiving and might not be the right choice for intermediates. That said, if you like a directional ski that isn’t afraid of high speeds and a variety of conditions (softer the better), the Vantage 100 is an appropriate tool.

Possibly the most surprising pair of skis on this list, Elan is taking their game to the next level with the Ripstick 105. Long relegated as the brand that Glen Plake skis, Elan is making a hard move into the mainstream of the all-mountain and big-mountain categories. At 105mm underfoot with reasonable tip rocker, the Ripstick flourishes in soft conditions and its semi-raised tail was made for first tracks. That said, the Ripstick performed extremely well on groomed pitches and bumps as well.

The Black Crows are making a splash in the United States after dominating the European ski industry for the last two years. One of the bigger skis on this list at 109mm underfoot, the Corvus was made as a directional ski whose home is at mid to high speeds in pow.  Although it performs reasonably well on the groomed stuff, it might not be the best choice for east coast skiers. However, if you’re skiing in the PNW, Sierra, or Tetons, this ski might be what you’ve been waiting for.

It’s no secret. After becoming one of the best-selling skis in the past decade, I was skeptical as to how the Soul 7 would match up to the rapidly progressing technology of their competition. Fact is, Rossignol created the most effortless ski on this list. The Soul 7 gets edge to edge with ease and is so light and stable, I’m suspicious as to what they’re putting in the ski. Although it has a speed limit, the Soul 7 is an all around ripping ski that conquers a variety of conditions.

There is a reason Scot Schmidt continues to ski Stöckli. The Swiss company continues to make some of the best and most expensive skis in the world. However, skiers get what they pay for and if you can save up enough for a pair, get the Stormrider 95. Stiff, damp, and strong, the Stormrider 95 does exceptional in variable conditions, powder, and hard-pack due to two layers of metal within the ski. However, the carbon inserts in the tip make the ski more forgiving than in years past. While many argue that there is no such thing as a “daily driver,” we beg to differ. All you need is the Stormrider 95.