Explained: How The Pineapple Express Is Bringing 1-3 Feet Of Snow To California This Week!

Explained: How The Pineapple Express Is Bringing 1-3 Feet Of Snow To California This Week!

We’re talking powder snow and lots of it later this week with up to 3 ft in some locations!

After reading the most recent powderchaser article, we wanted to take a closer look at what exactly is bringing all the moisture to California this season. The “Pineapple Express” is a phenomenon related to Atmospheric Rivers and Tahoe skiers talk about the Pineapple Express as if there were jinx involved. And maybe there is…

Over the past few years, various news and weather sources predicted ‘Pineapple Express’ systems that never delivered and understandably, Tahoe locals are wary. Plain and simple, I feel bad even writing this post. That said, it appears as the Sierra have finally turned the proverbial corner and maybe it’s time to break the curse.

Whatever the case, NWS is currently indicating that a ‘Pineapple Express’ is in effect and is subsequently responsible for the feet forecasted around Tahoe for the remainder of the week.

However, what causes a ‘Pineapple Express’ in the first place? To answer that question, we need to take a look at Atmospheric Rivers.

So what exactly is an atmospheric river?

Definition: An atmospheric river is a narrow [400-600km] conveyor belt of vapor that extends thousands of miles from at seas, carrying as much water as 15 Mississippi Rivers. It strikes as a series of storms that arrive for days or weeks on end. Each storm can dump inches or rain or feet of snow -NWS Reno

Basically, it’s a snowfall interstate and if that interstate gets rerouted around your area, you can expect a veritable wasteland of brown mountains. That was exactly the case over the past few years, when the Atmospheric river that normally impacts California stretched north, delivering snowfall to Colorado and Wyoming instead of California. Also, the AR’s over the past few years haven’t been as strong as this year.

The strengthening of the current AR impacting California is due in large part to the current El Nino phenomenon, which brings the AR further south and consequently delivers surplus snow amounts to California and the Southwest.

So What’s The Connection Between Atmospheric River’s and a ‘Pineapple Express?’ 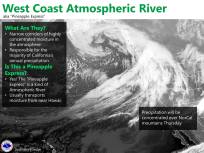 Basically, the ‘Pineapple Express’ is an AR that pulls moisture from the regions of the Pacific surrounding Hawaii and moves them headlong towards the California coast. The result is heavy rainfall along the coast and significant snow accumulations in the mountains of California. 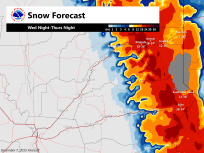 Either way, Californians couldn’t be happier to see some precipitation on the ground and they can expect even more by the end of the week thanks to the current Pineapple Express.

Currently, NOAA is forecasting up to 2 ft. on Donner Pass with areas surrounding Tahoe getting between 12-18” from Wednesday night through Thursday night!

Also Read: El Niño Is Now The Strongest Ever Recorded!