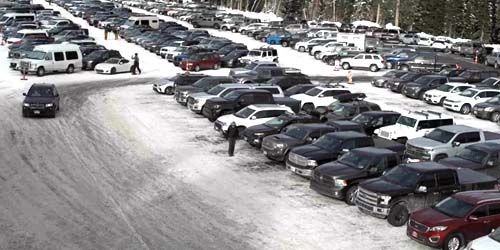 It’s pretty rare that we see an official social media account for a ski resort of Solitude Mountain Resort’s (UT) caliber engage in any kind of back-and-forth banter, but this is 2022, and the times are a changin’.

The thread is a little hard to follow, but I’m confident that my Twitter prowess (I *only* spend like 4 hours a day on that stupid bird app) will make this easier for you to understand. Just bare with me!

So this whole kerfuffle (great word, I know) started when Dave Amirault (@ozskier) Tweeted his disapproval that Solitude Mountain Resort is still charging for parking even after the passholder bus service has ended for the season:

@SolitudeMTN bus service has ended for the season and you're still charging for parking? pic.twitter.com/eHa2QcdobV

For context, Amirault is a ski industry vet who has a massive following across his social media platforms.

He worked at Freeskier Magazine, and has held numerous high-profile marketing jobs at ski resorts like Snowbird, Aspen, and Sunday River.

He currently works in tech, but is a sponsored skier for Salomon, and regularly promotes Alta Ski Area and Deer Valley Resort across his social media accounts. I hate using this buzzword, but he’s an ‘influencer’ in the ski industry by all stretches of the definition.

You might not expect Solitude to ‘clap back’ after Amirault’s Tweet, but that’s exactly what happened. Here’s how they responded:

Yes, we are still committed to our carpool initiatives. We heard Alta is skiing great right now.
Go there.

Solitude defended paid parking by citing their carpool initiatives. The resort decreases the cost to park based on how many occupants are in each vehicle.

For example, a car with 4+ people is able to park for just $5, while a car with one person costs $25 during the regular season.

Solitude was still charging for parking, but at discounted rates, from April 18th-April 30th.

Parking was free for all guests on closing day, May 1st.

They threw in the dig about skiing at Alta because the ski area closed for the season the previous weekend.

Amirault took exception to this response, and decided to clap back to the clap back posted by Solitude in the short video below.

(I hope my attempt at using young-person lingo isn’t adding any confusion to this story. Please send me a strongly-worded email using modern slang if you think I’m an idiot).

You know what @SolitudeMTN, @AltaSkiArea IS skiing great right now! I would rather walk up this mountain for an hour to take one run than pay you $25 to park. https://t.co/qKt28xwCWw pic.twitter.com/RPLPninu2Y

The ‘drama’ fizzled out from there.

Dozens of people piled on Solitude for handling the situation poorly while others just roasted the ski resort about their paid parking structure.

Solitude didn’t reply to many of the responses, but did have this to say about why they chose to engage in the “friendly banter” with Amirault on Twitter:

😬 we just love a little friendly banter with @ozskier and know how much he loves @altaskiarea and wishes it was still open.

I’m definitely torn on the subject. On one hand, I appreciate that Solitude is trying to encourage people to carpool. Less cars in the canyon is a good thing for the experience, and the environment.

On the other hand, charging an individual skier traveling up the canyon $25 to park his or her car is a hard pill to swallow. It seems exclusionary to people who can barely afford a ski pass to begin with.

I can’t believe the official Solitude Twitter account got to this level of ‘spicy’, and that these Tweets haven’t been deleted, but I kind of respect that they’ve decided to stick to their guns and not back-pedal on this exchange.

I’m not sure if they’re taking the ‘No publicity is bad publicity’ approach, or what, but I’m sure their social interactions are through the roof after this kerfuffle (sorry, I had to use that word again).