WESTERN SNOW CONTINUES FOR SOME. A LULL THIS WEEKEND BEFORE WE TRACK OUR NEXT STORM

We’ve finally had some fun powder to chase recently. Some of the team made it up to Steven’s Pass for 2-feet of fresh snow to ride on. We’re still tracking the pow moving across Colorado right now and it looks like a few winners could end with up to 4 feet for the storm total! As of Tuesday morning there were some highlights with more to come.

Today: @powderchasersteve via Instagram awaiting an epic opening of Highland Bowl on Tuesday with 12-16 inches.  Thanks for getting the Bowl open on Tuesday Aspen Highlands Patrol (Dan G keeping me informed today). It skied nearly as good as it gets.

If you want to chase powder and score the deepest snow sign up for our Concierge program which also supports Powderchasers! You can also donate to us here. Also, there are still a few open seats on Alaska Backcountry Guides in March where near record snow totals have been met in many areas. Conditions could be epic in AK this season. 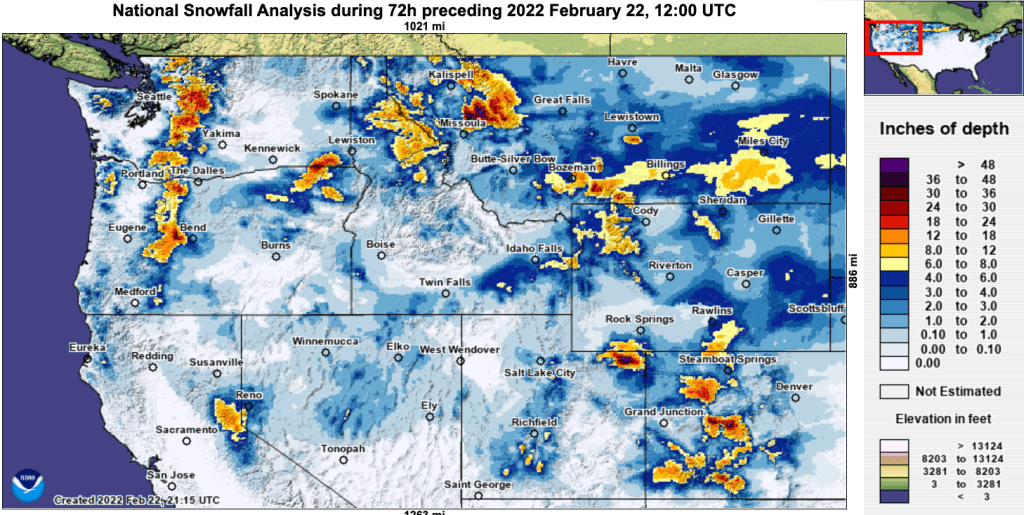 There has finally been some excitement with fresh snow in the west and it’s still snowing in some areas right now. California, Arizona, Utah, Colorado and New Mexico are all expecting more snow through the next 48 hours. More on that below.

Snow fell nicely in the Cascades where up to 30″ fell. Northern Idaho and Montana also got some decent snows over the past 72-hours. 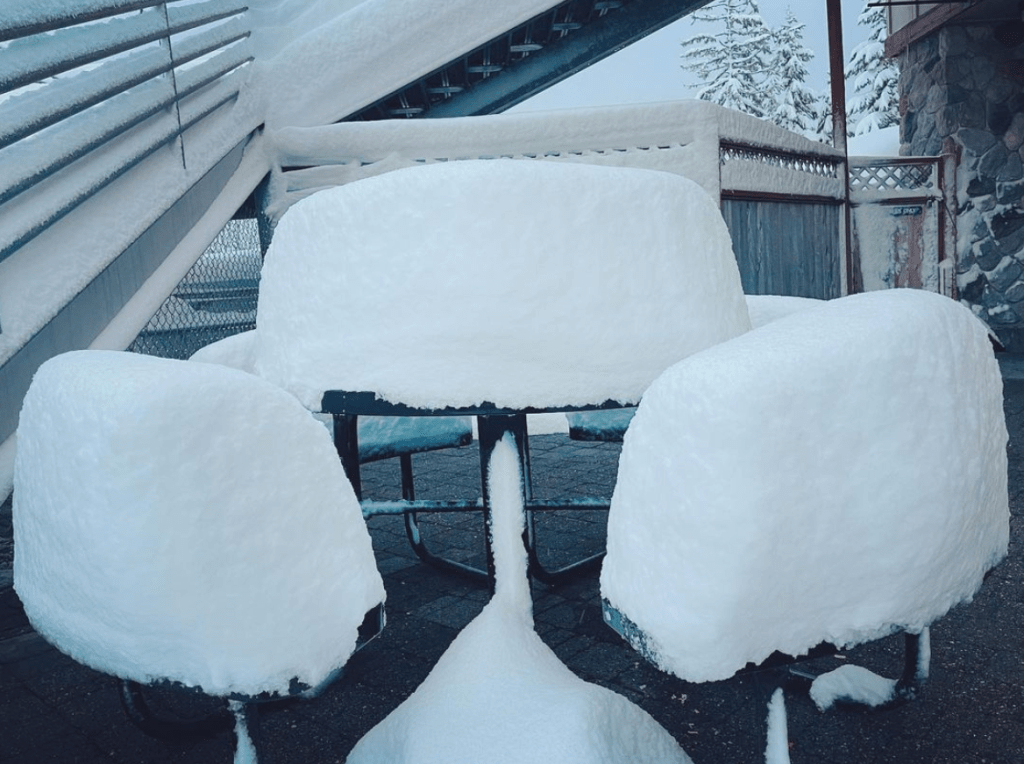 And we love to see this! The forecast calls for a bit more snow to fall. Here’s a look at the storm we’re tracking.

The storm is carving it’s way through the intermountain west and it is bringing cold air, high snow ratios, and many ski areas will be benefiting from it. Snow will wind down first in California by Wednesday morning and then by Friday morning for Colorado and New Mexico. 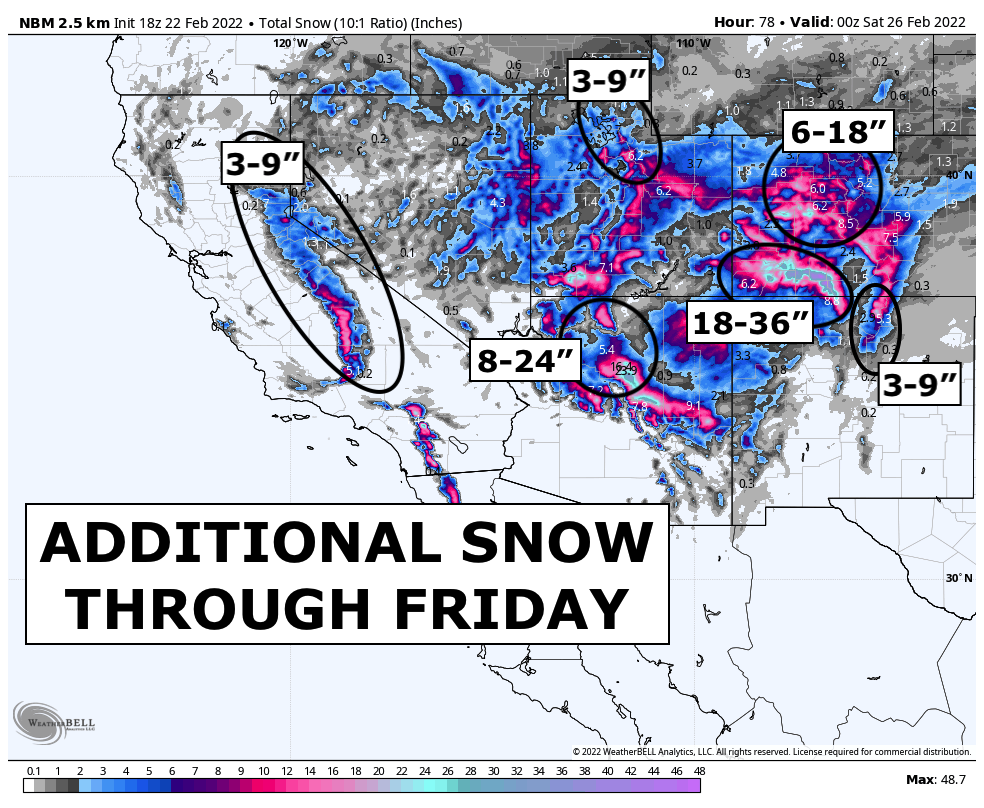 California, mainly near Mammoth will get the most snow by Wednesday morning. Thanks to a consistent southwest wind, Arizona Snowbowl and Wolf Creek should get some great totals by the time this storm ends. Arizona Snowbowl is likely going to be very deep Wednesday.

Winds won’t be as favorable in Utah but there will be enough lift and energy in the atmosphere for snow showers to continue through Wednesday. Up to 9″ could fall in parts of the Cottonwoods and Uintas. Most of Colorado is in the midst of an amazing snowstorm. More than a foot of fresh snow will be found widespread between now and Thursday but areas in the San Juans could expected at least two feet of snow. Wolf Creek is preparing for up to 4 feet of snow totals since the snow began on Monday evening. Steamboat may get a nice refresh but they may not get double digit totals. They are more favored by northerly and northwesterly winds – which isn’t the main wind direction this week. The highest additional totals in Colorado will fall late Tuesday through late Wednesday with 10-18 inches for the southern mountains (Purg, Wolf, Telluride wildcard) and 7-12 central (CB, Aspen). The I-70 corridor including Vail and Summit are likely to score an additional 5-12 inches by late Wednesday. Winds are not as favorable as the south regions but heavy moisture overhead will make up for some deficits.

In New Mexico, Taos could end up with some nice powder by Thursday but the wind direction won’t be as promising for huge numbers like their friends to the north but still, some awesome powder is falling. Plan on first chairs Thursday.

Enjoy the powder! We’ll dry out a bit this weekend as a ridge takes hold but by this time next week, another storm looks possible and it could bring some very good snows to areas of California.

Our next storm which move in for the first few days of March. This could be a great storm for the coastal states as onshore flow and cold air makes for a moist forecast with low snow levels. This storm also has the potential to bring widespread snow to inland areas. We need to watch it closely.

Get watching and let’s hope the active pattern continues!