Why You Shouldn't Stack Rocks In Wilderness Areas

Why You Shouldn't Stack Rocks In Wilderness Areas If you have ever been way way back in the middle of nowhere and felt the amazing feeling of losing all connection to civilization only to be zapped back to reality by a stack of rocks you understand this man’s position.

While many will jump to say that stacked rocks used as waypoints, or cairns, are a tradition that go back millennia, they loose their effectiveness when people start stacking rocks just because it looks cool for an Instagram photo (just search #cairn).

Here are the top 3 reasons you should not stack rocks in wilderness areas:

1. Rock Stacking is irresponsible: Long before balancing stones became trendy park rangers and game wardens built stone cairns as markers to keep people from getting lost. When people stack stones everywhere suddenly the one marking an important bend in the track looses its meaning which could lead to someone getting lost!

2. Rock Stacking is inconsiderate: Millions of people around the world venture into wilderness areas to escape civilization and experience untouched environments. In the eyes on many people seeing man made stone cairns everywhere they go is no different to finding people have graffitied a cliff face with spray paint or left litter lying around. As such the act of balancing stones can actually impede on other peoples ability o enjoy nature

3. Its bad for the environment: Many animals around the world depend on rocks for survival, when being pick up 10 or 20 stones to build them into one stack they are essentially turning 20 potential homes into only 1. Here in Australia many saxicolous species have “rock removal” listed as one of the major threats such as the Cunningham Skink, Broad Headed Snake & Corrangamite Water Skink.

….so next time you get the urge to stack some rocks in a seemingly pristine wilderness area just remember this post. For further reading on the subject please check out this Smithsonian article: 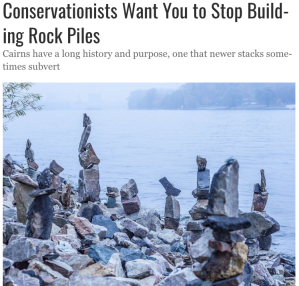 This bear at Glacier National Park…not a cairn fan: