The jet stream is forcing the majority of storms well north of the lower 48, into central and northern Canada and up through Alaska. The pattern slowly shifts early next week for the PNW and BC. By the end of next week the current models show a return of snowfall possible for Colorado (4 corners). The long range looks great so keep reading

We are in a lull for chase worthy storms currently with most of the moisture being shunting well north into central coastal BC and Alaska. Flooding is a concern for some areas in Alaska. Winter Park Ski Area opens today in Colorado. Stevens Pass in Washington opens tomorrow with 87 inches YTD (Locals are anxious to get on those lifts). The Epic Pass sales end on December 6th. Ikon Pass sales on December 10th.

Snow will ramp up once again for BC by the weekend bringing a light or moderate event to Whistler filtering south into the Cascades by Sunday night. Its possible that Monday brings some decent turns to the PNW favoring the Northern areas. Is it chase worthy? Most likely not but it will offer a slight refresh.

Another system albeit stronger than the Sunday system, moves in for the PNW by the middle of next week. That could fare well for Whistler once again and bring decent amounts to interior BC by Wednesday or Thursday. Snow will also be falling in the Cascades mid next week that will trickle further south into Washington and Oregon. Some moderate amounts are possible with this system that deserves watching. The highest amounts are likely to be found the further north you travel. While it’s not a major system, it may be worth following along for updates.

Inland areas near the Panhandle of Idaho will get light or moderate leftovers (East side of the passes) by Wednesday night.

Below: Low pressure trough over BC with the southern edge over Washington by the middle of next week. Oregon will also likely see some snowfall from this event but its too early for details. 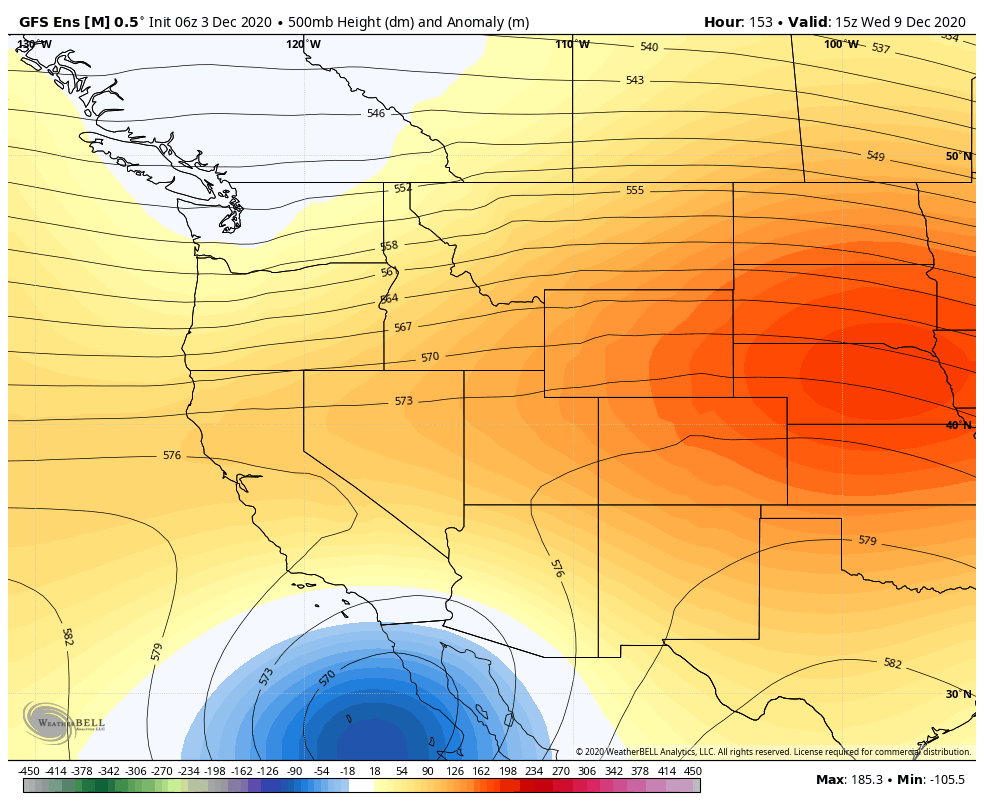 The system over the PNW mid next week will drag over the Rockies by Thursday or Friday. Moisture seems limited on the current models but things could definitely change as we are still 7-8 days out for confidence. This will likely bring some snowfall to areas of Montana, Wyoming, Colorado and New Mexico.

Below: Low pressure trough late next week digging into the 4 corners region of the west that should usher in some snowfall for a good portion of the Rockies. 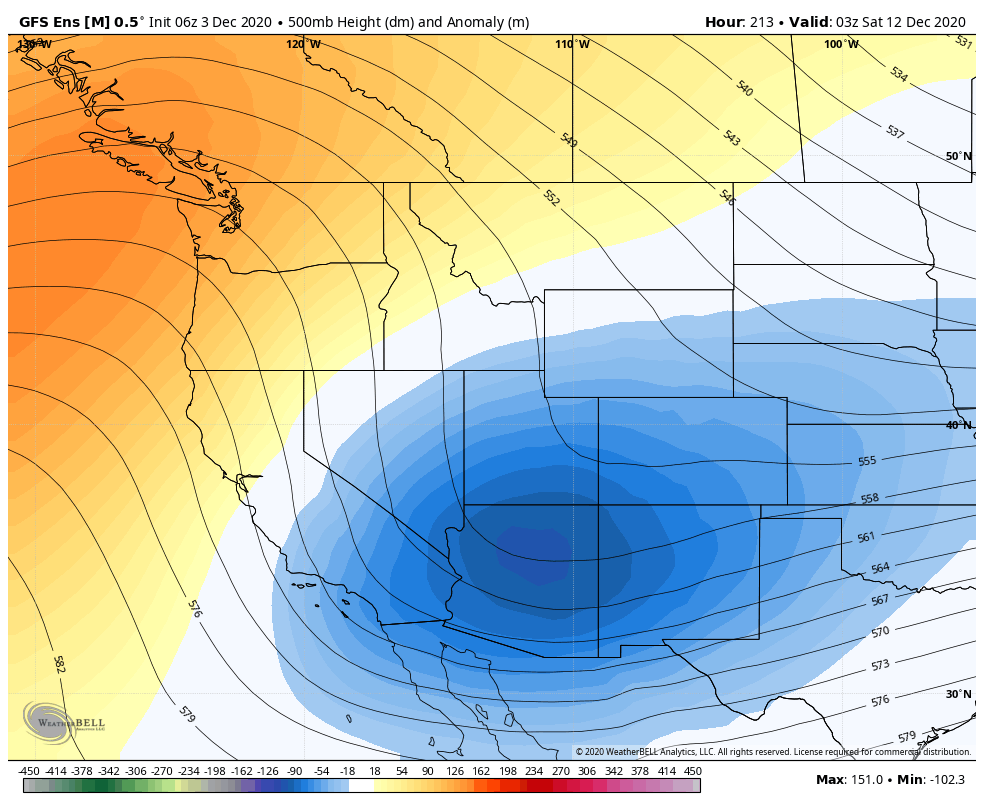 The best news we can offer right now comes in the extended period starting around mid December. The ensembles, long range forecasts, and even the Deterministic models show several stronger and perhaps colder systems moving into the west. These appear to bring significant snow to the PNW with decent energy also aimed at the Rockies. The models also hint of a significant system possible for the Sierra at some point once this pattern kicks in. It’s possible that the period preceding XMAS could offer some beneficiary snowfall in many areas.

Below: Looking out to December 19th, you can see total moisture (Starting today) increases for many areas of the west. While looking out this far is with very low confidence, its likely that some hefty snow totals will start to come in at some point mid month and beyond. 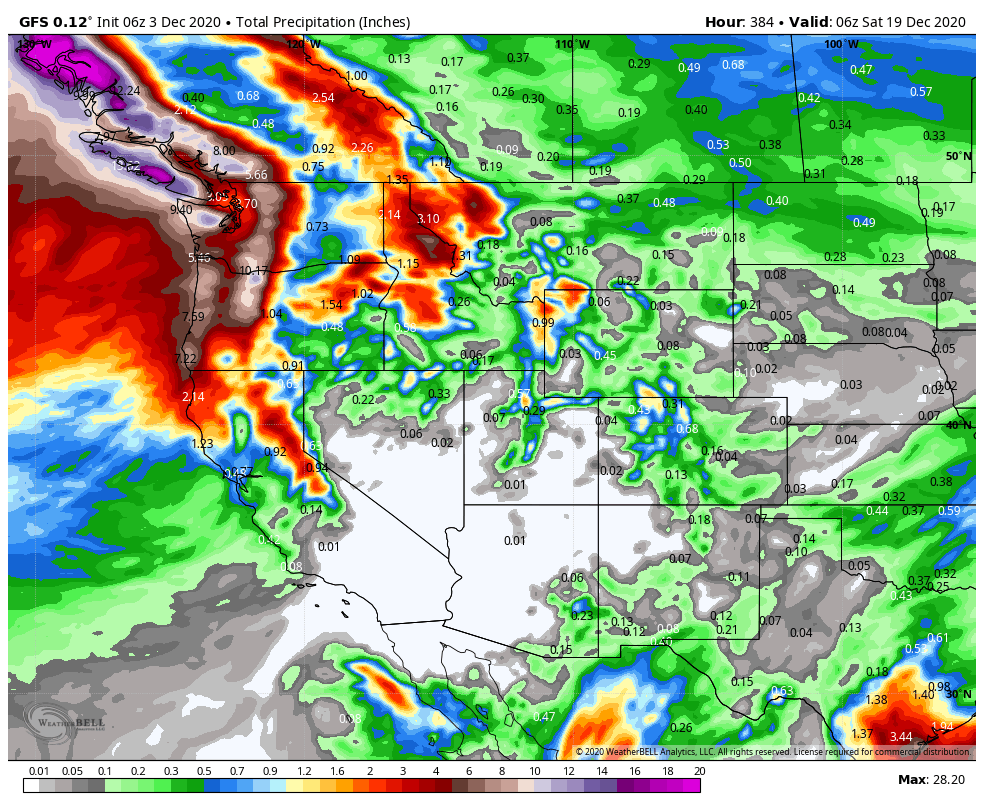 Check out our partner Tire Rack here!  We always chase with snow tires.

Enjoy the powder everyone! Stay safe so we can keep ski areas open!