Updated Snow Forecast For The PNW, SIERRA, and BC

Updated Snow Forecast For The PNW, SIERRA, and BC

It’s snowing at most ski areas this morning in the Cascades with cool temperatures. Snow levels will remain below the bases Thursday until an atmospheric river warms things up Friday/Saturday with FEET of upper elevation snowfall. Temps cool again late Saturday/Sunday with light snow possible for the NW. Canada will see significant snow in the southern BC ranges and decent amounts near Revy Friday night-Sunday. Chases are all dependant on how picky you are on quality. Resorts further north in Canada might your best bet.

Storm #1 is upon us in the Pacific Northwest. Telemetry at Baker, Stevens, and Crystal all show 4-5 inches has fallen overnight. Temps are cool this morning with snow falling at all base locations currently.  Models show another 2-5 inches are likely Thursday so skiing could actually be pretty good on the limited terrain that is open.

Snow will creep into Western Idaho Thursday PM to Friday with a good chance of 5-9 inches of dense snow at Brundage and Tamarack by the AM report (Friday).

Snow levels are as high as 5-5500 feet in the southern Washington Cascades (Crystal) so the highest totals will be found from mid-mountain up.  The central Cascades see slightly lower temps with easterly winds keeping cooler readings near Stevens Pass early in the storm cycle Thursday night/early Friday (Benefit from cooler air pushing east from the interior) Snow levels are likely to be in the 4000 range initially before rising to 4500 or higher on Friday. Meanwhile further north towards Baker who opened recently temps stay a bit cooler with snow levels around 4K feet during the storm cycle.  This will keep heavy snow going at Baker with any impacts of rain limited to the base area.   All mountain ranges of the WA Cascades will see 2 feet at upper elevations with some isolated areas of 3 feet near Baker and perhaps south at Crystal (7,000-foot peak).  The Eastern Cascades will stay cooler so areas on the NE side of Washington may see slightly better quality during the storm cycle (3500-4K snow levels).  Also, the Panhandle of Idaho especially towards the Canadian border will see significant snowfall above 5500 feet.

Below:  Cold front (Blue line) has dropped the snow levels in the PNW, especially in WA.  Quality will be decent on Thursday. Image: Courtesy of Meteo Star.

Interior BC scores deep snow (12-20) Friday/Saturday (Warming trend) with perhaps another 6 inches on the snow report for Sunday morning (Cooling trend).  The southern zones of BC are favored for the highest totals.  Temps will be warmer in the south with snow levels above 4500 feet Friday/Saturday, dropping to 3500-4K late Saturday night as snow is weaning.  Further north towards Revelstoke slightly cooler temps may keep quality higher but amounts will be lower.  Snow water densities will be significant in the southern BC mountain ranges with rapidly rising avalanche conditions!  Look for closed terrain (Avy) to possibly open Sunday or early the following week.

Chase?  Baker for the novelty (Might be a depressing drive up in the rain), Summit of Crystal, Interior higher elevation BC resorts, Summit of Schweitzer. Consider Brundage or Tamarack in Idaho for Friday. The weekend may offer some chases in BC elevation dependant.  Higher water content and totals will be found in the south.  Expect closed terrain especially Friday/Saturday due to rising Avy danger.

The Sierra will see a teaser storm Sunday night into Monday.  The models show moderate snow for many areas and a cooling trend (Snow likely at the bases). There are some bulls eyes in the southern Sierra just west of Mono County (Mammoth) towards Yosemite National Park.  I am not confident in deep snow at Mammoth just yet with moisture a bit west.  All areas of the Sierra score some snow from this storm that will refresh the slopes Sunday night/Monday.

That system drops south and is likely to push north just before XMAS into the 4 corners region.  Who scores a White XMAS?  My bet at this point would be somewhere in the 4 corners favoring southern resorts. You might be able to storm ski on Christmas Morning in some of these areas,

The PNW looks colder and active just after XMAS.

Below: Total snowfall from today through XMAS EVE.  Most of the PNW snow happens this weekend where areas further east in the Rockies and Sierra happen next week. 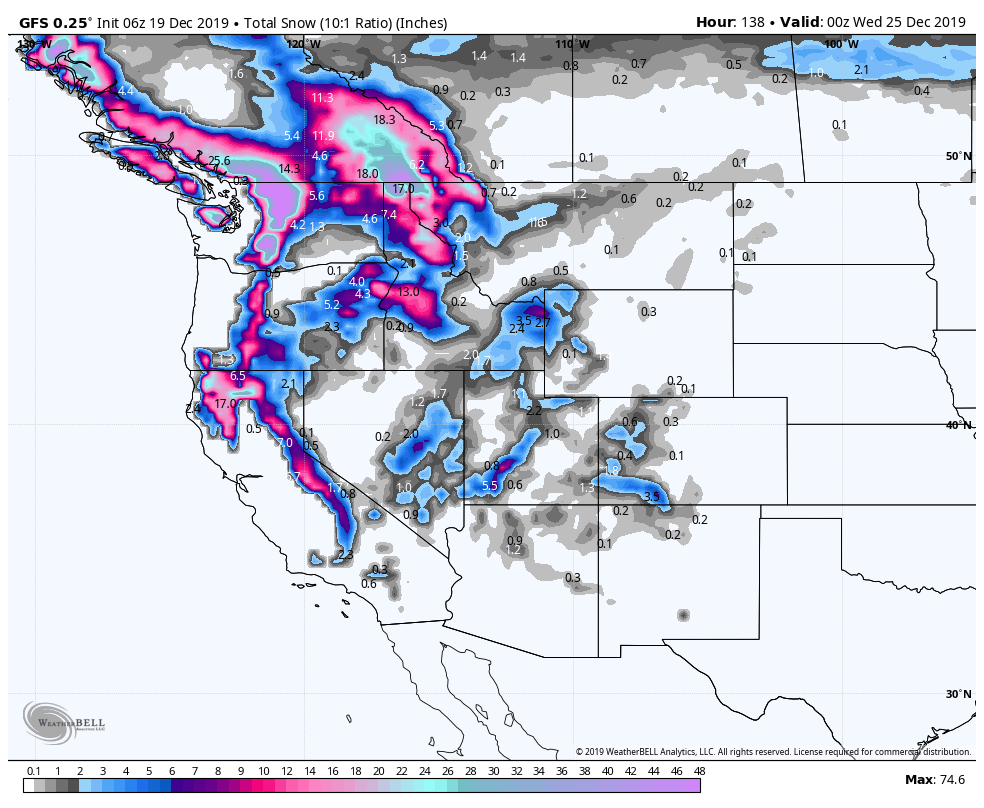 Powderchaser Steve- Thanks for those that have signed up for the Concierge and donated to Powderchasers to keep your love of snow going!