Cascades and Coastal BC Will Finally Get Big Snowfall

Cascades and Coastal BC Will Finally Get Big Snowfall

We are on the tail end of a storm cycle that just landed 2-3 feet for the Sierra and roughly a foot in many areas of the Rockies. The week ahead will get very active for the Northwest and Coastal BC who really need snow. That system hits the Rockies by Friday extending itself into the weekend. The Sierra is a wildcard

Snow showers are continuing this morning in Colorado and Utah with amounts in the past 24 hours generally around a foot in many locations in the Cottonwoods in Utah and most of west central Colorado.

The Tetons who I highlighted last week came up short Saturday night (0-1 inches) but quickly caught up during Sunday (11 inches at Targhee). My original forecast was 4-8 Saturday night and 4-8 Sunday.  The Euro showed moisture favoring the northern Teton Range and areas further towards Yellowstone. The GFS and Canadian had the bullseye over the ski areas Saturday night.  Snow increased in the Tetons on Sunday with nearly a foot at upper elevations.  That’s within range of my forecast, however, timing for an overnight dump for Sunday morning was a missed forecast.

The Wasatch had similar amounts to the Tetons at the upper elevations (Most of this fell during Sunday).

In Colorado, the highest amounts were found in the western portions of I-70 as well as the central and north San Juan ranges. Winds started out from the SW (Good for the southern San Juan range), shifted to the West (Good for Crested Butte, Breckenridge) before shifting to the NW (Great for Telluride, Vail, Snowmass, Aspen).  Moisture got hung up over Aspen for several hours last night (4 PM-9 PM) with 2-3 per hour snowfall rates.  High Precipitation rates were also noted over Telluride and Vail in the 9-11 PM range.

Bottom Line: Hopefully you are in line this morning in Colorado scoring some fresh powder. Look for new terrain openings!  Conditions were really good yesterday in Utah where I scored some great storm skiing at Snowbird. Today will see a light refresh from last night (1-3 inches).

The models continue to advertise a decent system moving into Coastal BC by Thursday morning.  Its likely that 1-2 feet or more fall over Whistler late this week. Interior BC will see several periods of moderate events.  Decent amounts (12-18 inches or more) are in the cards for the Washington and Oregon Cascades especially Friday/Saturday. Its too early to speculate on exact timing and pinpoint ski areas.  All resorts in the PNW should do well with snow levels low enough for base elevation snow.  interior BC will also see snowfall.

Below: Snowfall for the Pacific Northwest through Friday night (10-20 inches or more are likely in some areas). 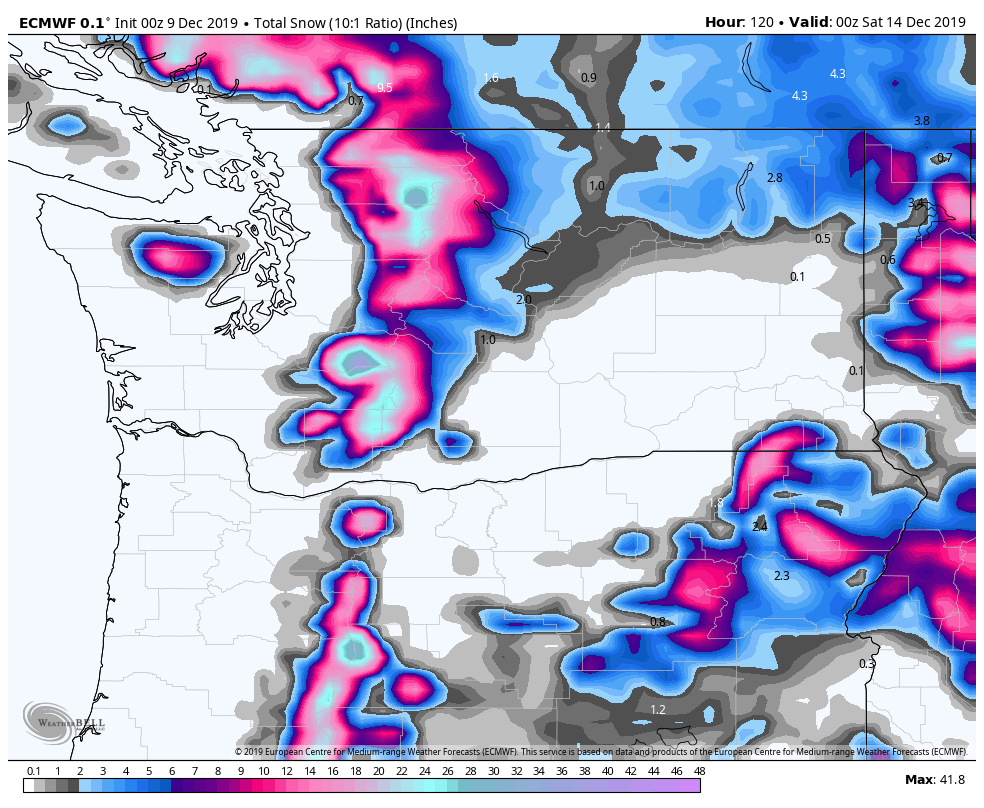 The northern and central Rockies, including the Panhandle of Idaho, all will score powder late this week into the weekend. There should be some great chase opportunities beginning Friday in the Rockies and lingering well into the weekend.

The Euro shows moisture dropping south into the Sierra where the GFS keep most of the action north. It’s likely the Sierra will score additional powder, with confidence lacking on amounts.

Enjoy the powder everyone.  We are off to a good start in many areas!  Hopefully, the PNW catches up!  If you want to chase powder this season or get more details in where to score the deepest snow join our concierge program.  This also supports the Powderchasers daily snow forecast!

EPIC ALERT- Multiple FEET of Blower Powder For The West

An inbounds avalanche today at Alpine Meadows, CA took the life of 34-year-old Cole Comstock from Blairsden, CA according to a (…)

One person was killed and one person was seriously injured in an avalanche at Alpine Meadows in Lake Tahoe. The incident happened (…)

Here’s the coolest thing I’ve heard all week: Twice a day nearly 900 weather balloons are simultaneously launched across the planet. The (…)

On any given weekend during the winter, tens of thousands of skiers and snowboarders pile onto 1-70 to make their pilgrimage to the (…)

My skiing roots started at a place known by many on the eastern seaboard. Smuggler’s Notch, VT. Three mountains. Five two-seat fixed (…)

Snowboarding's Best Up and Coming Superstar Is From North Carolina

If any of you Tar Heel shredders are looking for a hometown hero we got you covered. Meet the pride of Blowing Rock, North Carolina, Luke (…)

How To Safely Deal With Cornices